Aside from the political zealotry and the news that the degradation of our planet is happening more rapidly than we even thought, it’s been a pretty great week on Twitter.

Josh Hermsmeyer said that defenses don’t matter when projecting offensive players, and was summarily handed Ls from Derek Carty and Adam Levitan while drawing the troll ire of DraftCheat and a cavalcade of others. (For more on this subject, check out this week’s Aggression to the Mean show with Hermsmeyer, Carty, and Josh ADHD). I chimed in with a little thread of my own. All bets were off when headChopper lampooned him in this epic Hitler vid.

Speaking of ADHD, he took a good deal of heat this week for his cash lineup, which we discussed on this week’s Gillcast. And let me back Josh up here for a second: He’s a brilliant data analyst and his work has been an invaluable resource for fantasy players everywhere in a number of different fantasy arenas. He’s not a professional DFS player, nor does he profess to be. He’s learning – just like the rest of us – and he’s willing to put himself out there in a transparent manner … which is more than I can say for a lot of people in the industry. The haters can piss off.

And speaking of pissing off, that’s what I did to myself Sunday morning by swapping Adam Thielen out of my cash game lineup, despite having him in there all week. He was even my song-boy last week – and If you know anything about the weekly song-boys, they tend to be my locks, and they tend to smash pretty good. Thus far:

And I swapped off of him like a damn fish! GAH. Also – if it’s not obvious to you which song the lyrics are to (or even if it is), there will always be a link posted next to the players’ name so you can groove out with me. Anyway … I’m a fish and while I doubt I’ll ever stop making mistakes, I won’t be making that one again.

I’ve always been against the Sunday morning swap, which by my math loses you points 96.4% of the time (all figures approximate). The only time I feel like it’s a good thing is when new actionable information is available, which honestly isn’t that often these days. I mean, when’s the last time we had a true game-time decision that we weren’t pretty sure about already? And when you have a lineup you’ve researched, carefully assembled, and you’ve felt good about all week … and then you change it Sunday morning, well, you deserve what you get. But despite last week’s early morning misstep, we’re crushing so far this season, my friends. Let’s keep this train rolling in Week 6.

On a typical NFL week, I put together multiple cash game lineups across multiple sites which will have significant player overlap. I diversify to take advantage of different price points on different sites, as well as hedge on the players I don’t feel as strongly about to reduce variance in a game where it’s inherent. The players I feel strongest about will be in the majority of my lineups – these are my “high exposure” picks. The “moderate exposure” players will be in roughly half of my lineups, and the “GPP” picks are higher-risk, high-reward plays that I believe will be under-owned by the masses. I can’t write up every single player I’ll be using in time to put this column out on Thursday, but I’ll do my best to give you the most pivotal plays I can. The rest is up to you.

JAMEIS WINSTON @ ATL – What’s there to like about Winston? Well, let’s see … he’s got more weapons than North Korea, he’s facing a defense without both of its starting safeties and middle linebacker – a team that also happens to have fourth-lowest adjusted sack rate in football, he’s in the game with the highest over/under of the main slate, he’s in a dome, he’s cheap, and by all accounts he hasn’t been in an Uber this week. Besides that, not much I guess.

EZEKIEL ELLIOTT vs JAX – A true social experiment in the era of “defense doesn’t matter”, I know where I stand: I wouldn’t give two squirts if Jacksonville played defense with 11 super-human cyclopes – if you give me Zeke for $7k (DK) I’m jamming him in and not thinking twice about it. This is a man who’s been 2nd, 2nd, and now 3rd in scrimmage yards per game in the three seasons since he’s been in the NFL, and this year he already has 29 targets when his previous career-high was 40. So come on and get some, ya one-eyed bastards.

TODD GURLEY @ DEN – Every week God Gurley is in a tier by himself, and this week he’s finally priced like it. Per TJ Hernandez, Gurley has 28 interactions (rushes + targets) inside the opponents’ 10-yard line. Alvin Kamara has 22 … and no other RB has more than 14 – now that’s fantasy dominance. I’ve found room for him in my initial DraftKings build … now all I need to do is not tinker on Sunday morning and I’ll be making more money than Betsy DeVos’s student loan collection racket. 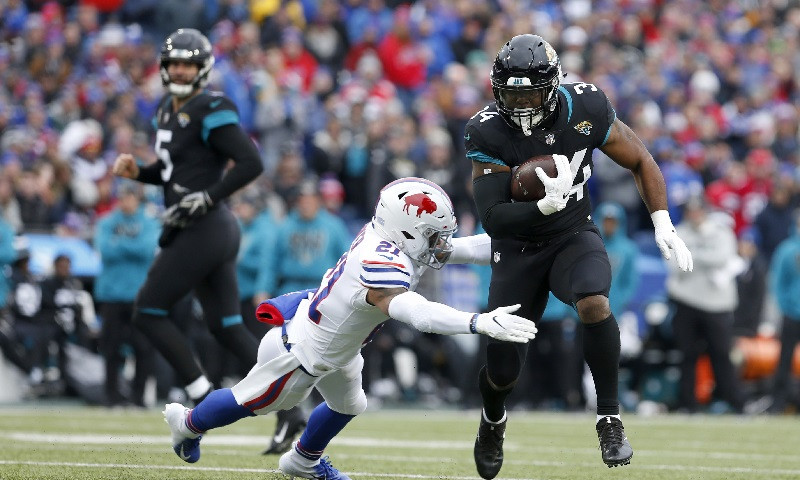 CARLOS HYDE vs LAC – Todd Gurley leads the NFL with 101 rushing attempts. Carlos Hyde is #2 with 100 … and he’s less than half the price on DK. Hyde has at least 17 touches in every game this season, has scored five touchdowns in five games, and goes “hee hee” every time he sees the pied piper of Cleveland Browns football, Baker Mayfield. So yeah, I’m in on that.

T.J. YELDON @ DAL – He’s not quite the value he was last week – his price is up, and his matchup is worse. But he’s still a favorite for 18+ touches at a moderate price point, and his main touch scavenger (Corey Grant) is now out for the season. As usual, he’s … fine. He is fine.

Ah, Julio’s coming
Through the air
Locking him in, everywhere
He’s all I need, all my life
I feel so good when I just lock him in
Hoo Hoo Julio
Mount St. Julio eruuuupt
Hoo Hoo Juliooooo

KEKE COUTEE vs BUF – Oh, you thought I was gonna go with “Keke Do You Love Me” this week? I don’t pick on that low-hanging fruit. Besides, Phil Collins > Drake all day, every day. But look, Keke’s rocking a 26% target market share since he stepped on the field and Nuk is gonna be plastered up by Tre’Davious White, which may filter a few targets elsewhere. And Keke’s aDOT of 5.0 is solid for cash games because it lowers his variance, ergo he’s turning 77% of his targets into receptions, which is yuge on full PPR sites. And hey, his .51 weighted opportunity rating is about even with those of JuJu Smith-Schuster, Cooper Kupp, and Emmanuel Sanders. He’s unlikely to be this cheap for long, so take advantage while you can.

CAMERON BRATE @ ATL – Early week reports had O.J. Howard practicing on a limited basis, and if he suits up, Brate goes from “must play” to “meh play”. Which is kinda whatever. Sure, we’d love to have a cheap TE option working against the decrepit middle of the Falcons defense in a projected shootout. But everyone would play him anyway, so don’t feel bad if it doesn’t happen.

JEFF HEUERMAN vs LAR – If I’m paying up for Gurley, I ain’t paying up for the toxic wasteland that is the main slate’s tight end position. Just give me the cheapest homie with a pulse, which happens to be this man. And hey, he’s not so bad – he’s got 11 targets in two games since Jake Butt cracked out. The Rams should force the Broncos to throw plenty and the weakness of their D is the linebackers, so if defense mattered, it would favor Heuerman. But it doesn’t, so I’m going to lock him in and then go eat Arby’s after the game.

COWBOYS vs JAX – I could tell you that Dallas is 8th in adjusted sack rate and 3rd in QB pressures, but who gives a damn about all that when all you need to know is that you can play a decent defense at home against Blake Bortles for $2300 on DraftKings. Sometimes, it really is that easy.

RAVENS @ TEN – The Titans are the answer to the question, what would the Packers offense look like without Aaron Rodgers? And just for good measure, it may be even worse on Sunday if Taylor Lewan can’t give it a go. The Ravens have been one of the league’s best defenses, allowing just 4.6 yards per offensive play and 15.4 points against per game (both #1 in the NFL), a great match against Tennessee’s pathetic figures of 4.8 yards per play (3rd-lowest in the NFL) and 17.4 points per game (4th-lowest in the NFL). Quite affordable across the industry, the Ravens have the high floor ideal for cash games in this matchup.

JARED GOFF @ DEN – Goff leads the NFL in passing yards per game (345.4) and adjusted yards per attempt (10.8) as the Rams are scoring the 3rd-most points per game (34.6). And yet he’s priced as just the QB8 on DraftKings and will likely go sparsely owned as owners focus on the TB-ATL tilt.

TEVIN COLEMAN vs TB – Most GPP builds will focus on the air attacks in this game, and playing Coleman creates leverage off of that chalky line of attack while holding standalone value, as he was priced before news broke that Devonta Freeman is unlikely to play. In the three games D-Free missed earlier this season, Coleman averaged 18 touches and 2.1 red zone interactions per game.

TYLER BOYD vs PIT – Last week Pittsburgh joined the 21st century by allowing Joe Haden to shadow Julio Jones, leaving Mohamed Sanu to post a solid 4-73-1 line working against the rest of the Steelers’ wretched defensive backfield. We may see a similar dynamic occur in this game with Haden following AJ Green, which could mean big things for Boyd, a man who has seen a 24% target share and a .57 weighted opportunity rating since Week 2. (Over that timespan, A.J. Green has seen a 22% targets share and a .58 WOPR).

CHESTER ROGERS @ NYJ – The kid has back to back games of 11 targets and eight receptions, and TY Hilton is unlikely to suit up again this week, leaving Rogers likely to see full-time work yet again. He’s certainly in cash consideration but will also be a top low-priced option to fill out my GPP teams centered around high-priced stacks.

MOHAMED SANU vs TB – Just like last week, Sanu is a sick leverage play off of Julio Jones and Calvin Ridley in a projected shootout against a bad pass defense. Sanu actually leads the team in snap share at 81% (Ridley is at 60%) and has slightly better target numbers than Ridley (16% share to 14%) as well. Secondary receivers in shootouts have been the GPP winners this season, and Sanu has that kind of potential this week.

C.J. UZOMAH vs PIT – In Cinci’s first game without Tyler Eifert, Uzomah played 92% of the snaps and had the only two TE receptions for the club. This week the orange kittens play Pittsburgh, a team that hasn’t been able cover TEs since Ryan Shazier went down. This season the Steelers have allowed the most targets (56) and the most receptions (40) to opposing TEs while allowing the second-most yardage (424) and touchdowns (3).

Thanks for reading, everyone! Let’s go make some money in Week 6.