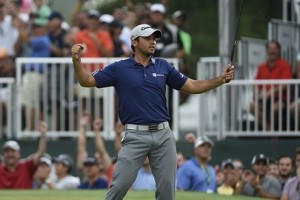 The DraftKings $2.5M Millionaire Maker ended in dramatic fashion last night as carlbassewitz held off a late charge by RotoGrinders analyst and DFS legend headchopper to become the second PGA millionaire of the season. Dustin Johnson’s three-putt on the 18th green secured the title for carlbassewitz and his team of Jordan Spieth (1), Louis Oosthuizen (T2), Kevin Kisner (T12), Patrick Reed (T14), Tony Finau (T14), and Jason Dufner (T18). Incredibly, carlbassewitz and Masters Millionaire Maker champion brettmarino each did it with a single entry.

Let’s take a look at the breakdown by number of entries.

Now let’s take a look at some other interesting statistics.

• The highest finish for a player with one golfer that did not make the cut was alklutts in 25th place.

• The highest finish for a player with two golfers that did not make the cut was CapeCoast in 1,668th place.

• The most highly owned golfer in the field (Hideki Matsuyama – 28.5%) appeared in only one of the top ten lineups.

• The Straight Chalk Award goes to 10 players, with each golfer at least 14% owned.

• 3,048 players cashed without choosing a golfer that finished in the top 10.

• 556 players chose Jordan Spieth and either Dustin Johnson or Louis Oosthuizen but did not cash.

Registration is currently open for the DraftKings $3M Fantasy Golf Millionaire Maker for The Open Championship beginning July 16th, where players will have another shot at a million dollars.