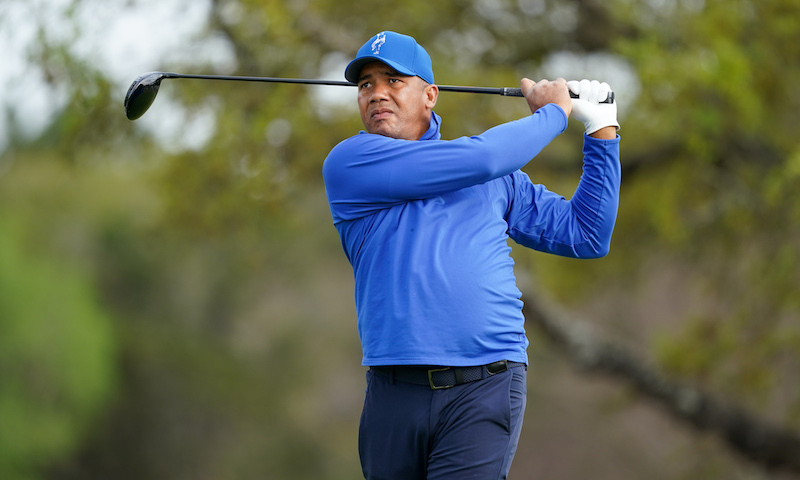 We started the week looking at U.S. Open odds, followed by my two favorite golf betting picks, but now it’s time to pick a few sleepers and longshots who can win at Torrey Pines.

I already mentioned him in yesterday’s article, so I won’t write about him too much here. However, it is worth noting that, to my surprise, we’re actually getting longer odds for Higgo on Tuesday than we were 24 hours ago. I thought the South African golf phenom would pick up steam in U.S. Open betting circles, but it appears most people are just opting to play him in their PGA DFS lineups. Now, at FanDuel Sportsbook, we can bet Higgo +8500 (or 85-1), meaning a $10 bet will pay out $850 if the 22-year-old can win in back-to-back weeks. I love Higgo’s game. He hits it far, he’s a proven winner overseas, and he has the composure of a seasoned veteran. My prediction is that anyone still sleeping on Higgo after his first PGA Tour win will wake up sooner than later.

Another popular pick for DFS, Hoffman is only priced at $7,200 on DraftKings, and the bargain gets even better at DraftKings Sportsbook. There you’ll find Hoffman carrying nearly 100-to-1 U.S. Open odds. A $10 bet pays out $900, which is superb value considering how well Charlie has been playing as of late.

Hoffman resides in Las Vegas, but was born in San Diego, California, which isn’t far away from Torrey Pines. He hasn’t played in a U.S. Open since 2018, when he finished T20. Before that, he finished solo 8th and T37, respectively, in 2017 and 2016. The 44-year-old enters the 2021 U.S. Open playing as good of golf as he’s played in years. The man hasn’t missed a cut since the first week of February. He had five straight top-20 finishes, including a 2nd and 3rd, before finishing 57th at the Memorial two weeks ago. His short game is atrocious, sure, but when it comes to the field’s last 50 rounds, he ranks 2nd in strokes gained approach, 24th off-the-tee, 3rd in ball-striking, and 8th tee-to-green. And oddsmakers want to give us 90-1? I’ll gladly accept.

I’ve made a habit to bet and play Cink in DFS this year, and so far, it’s been paying off. Cink is 48, but he’s having one of the best seasons of his career. At one point, he and Bryson DeChambeau were the season’s only two-tournament winners. Impressive indeed.

Speaking of DeChambeau, Cink has taken one out of the bomber’s playbook. No, he’s not hitting it 350 yards like Bryson, but he has added as much as 20 yards to his driving distance. In fact, he ranked 27th on Tour in driving distance before the Palmetto Championship (which he did not play in). How does that compare to previous seasons? Well, in 2020, Cink was all the way down to 114th, averaging only 295 yards per drive. This year, he’s averaging nearly 306 yards.

The veteran will need that extra strength to battle through these difficult U.S. Open conditions. Torrey Pines is one of the longest courses on Tour, and it will play even longer with narrowed fairways and thick rough. Will Cink win his second major championship of his career (his first since the 2009 Open Championship)? Probably not, but there’s no doubt he’s a longshot to watch out for.

Vegas is a lot similar to Hoffman, only his short game is worse and his irons aren’t quite as pure. Off the tee, though, Vegas is an absolute monster. He hasn’t had as much recent success as Hoffman, but he has made five straight cuts, including a T2 last week and a T9 at the Byron Nelson. He’s a 300-to-1 longshot for a reason, but I still think there’s value if you want to place a small bet on Vegas.

Ok, this is about as big of a longshot as you can find and take semi-seriously, but hear me out: Walker came out of nowhere to finish T6 at The Memorial, his first top-10 finish since 2018. During those four rounds at Muirfield Village, Walker trailed only Patrick Cantlay, Scottie Scheffler, and Collin Morikawa in strokes gained tee-to-green. He even beat those guys out in strokes gained approach, gaining 7.1 stokes on the field. The only place he didn’t gain? On the green.

His ball-striking performance was likely an outlier, and I’d be shocked if he duplicates it, but a T6 is impressive when you consider he gave up nearly two strokes with his putter. It’s been a long time since the Texan has been in contention at a major, but it’s not like he’s never won one. Maybe he’s finally figured out some things and is back for good.