Odell Beckham Jr. has absolutely dominated in his rookie year – far more so than I imagined he would in any season – and he was present in all three DraftKings championship lineups in Week 16 (Flea Flicker, Chop Block, and Main Event).

If you recall, the Main Event was a $1500 buy-in, the Chop Block was just $50, and the Flea Flicker was $5. I don’t think I’m going out on a limb in saying that, overall, the level of competition is stiffer in leagues with higher buy-ins. There are lots of –EV players at all levels, but you aren’t going to run into any John-Kuhn-led lineups in a league that costs $1500 to enter.

Last week, Beckham was the most expensive wide receiver on DraftKings and he was facing a pretty hot St. Louis Rams defense. Beckham absolutely torched them, but I’d argue that he wasn’t the best value at the wide receiver position.

The fact that Beckham’s usage was so low in the Main Event confirms that idea. Just 1-in-30 rosters were led by Beckham, suggesting that the “sharp” money was on other guys. That doesn’t mean Beckham was a poor play, but just that he was probably overpriced, regardless of how well he ended up playing.

It’s always difficult to come to a consensus on value, but I’ve noticed that same trend in price sensitivity all season; DraftKings users in lower buy-ins care less about price and more about recent performance and expected production. Whereas smart daily fantasy users are generally trying to balance value with expected ownership in GPPs, novice users typically aren’t extremely value-focused.

Being Contrarian Based on League Type

I think game theory is a major component of tournament success, and the best players are typically thinking one step ahead of their opponents. We’re basically playing a more complicated version of rock-paper-scissors. 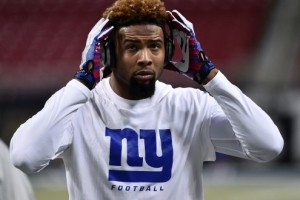 That means that what is “optimal” in tournaments depends on what your opponents are doing. And based on (admittedly anecdotal) evidence this year, I believe that we should approach low and medium-stakes GPPs differently than higher buy-ins.
Specifically, winning cheaper tournaments is probably more about finding value – similar to our strategy in cash games – because 1) it’s more difficult to predict usage and 2) we can easily combine value and low ownership because most users don’t care about maximizing overall value. Ideally, we want both high-value players and a unique tournament lineup – something that’s workable in cheaper tourneys.

The problem with a value-based approach at higher stakes is that there isn’t as much “bad” money on low-value players. The players who offer value are typically in a lot of lineups, so it’s sometimes quite difficult to have a ton of value and still find low-ownership players.

For that reason, I believe it makes more sense to go against the grain against better players. The idea is that all of the usable value from “high-value” players dissipates since their usage is typically so high. The potential similarity of lineups in high-stakes leagues adds more actual value (the pragmatic kind) to forgoing player value (the theoretical kind) in terms of expected production and price.

Same player, same price, different decision based on the thoughts and actions of others. That approach, in my view, is the easiest way to find success against the crowd in large-field leagues.