In our previous article, we analyzed millions of lineups to show how valuable stacking is even with most of the field joining the party. If you haven’t already, I encourage you to check it out here, but the biggest takeaway is that it is definitely still +EV to stack around your QB. So, the logical next step is to see what types of stacks performed the best, right?

As we showed in the first stacking article, most DFS players have figured out that stacking your QB with one of his WRs is a beneficial way to build NFL DFS lineups. This makes all the sense in the world since the correlation between the two positions is so strong. But with everyone doing it now is there any value left? Or should we start to look at more creative ways to get exposure to high-scoring offenses?

First, let’s go over a few quick assumptions. As with the last article, stack size assumes a QB is in the stack so a stack size of 1 equates to QB + 1 teammate, while a stack size of 2 equates to QB + 2 teammates, and so on. We are also only looking at single-entry and multi-entry GPPs. Once we have built a foundation for our stacking analysis we will start to look at other game types, such as cash games and qualifiers, and how your stacking strategy should be adjusted. Finally, we will only be looking at combinations for stack sizes of 1-3. These are not only the most widely used but also the most effective. Ok, enough with the chit chat, let’s get to the good stuff.

What stacks have been the most popular? 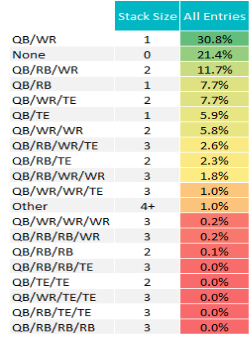 No surprise here that QB/WR is the most popular stack and by a large margin. No other stack is ahead of, or even close to, lineups with no stack. QB/RB/WR is the second most popular stack, and no stack of 3 was used more than 3% of the time. As we have seen from our prior analysis, there is a lot of value to be gained by stacks of 2 and 3, so let’s look and see how the top lineups were distributed. 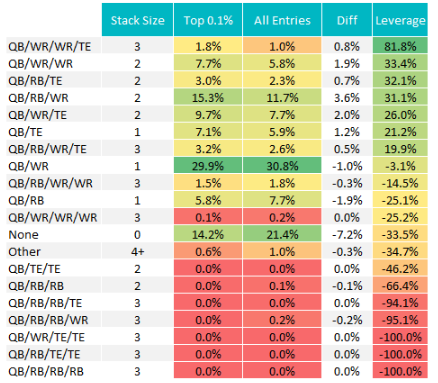 We see a big surprise here at the top with a full onslaught of QB/WR/WR/TE providing a large amount of leverage. The caveat here being that it was still a low % of the top 0.1% of lineups, so while I wouldn’t want to make this the core stack that I use, I think it can be valuable if used in the right spots. More importantly, we see the next four stack types are of the two-man variety, and in total, they account for 35.7% of the top lineups, while only being used by 27.5% of the field. Also, while most of the field is stacking their QB with just one pass catcher (44.4% of the field), top lineups have actually used this strategy less (42.8%). In fact, the only stack size of 1 with any positive leverage at all was QB/TE. What was somewhat surprising to me was the significant difference in top lineups vs the field using QB/RB/WR stacks. For a long time, many have thought of QBs and RBs being negatively correlated, but with the NFL evolving to a more pass-heavy league and teams using their RBs in the passing game, I think we are seeing a lot more potential for including RBs in your stacks, and the field hasn’t quite caught onto that. Just make sure you’re not stacking ONLY a QB with an RB, as that has actually had the worst leverage of any stack.

We should also point out that the bottom of the table above is monopolized by stack types that make up <1% of all lineups. This is further evidence that it does not pay to get cute with your stacks. Rather, we should be sticking to the basics and making sure we get as many good combinations of our target offenses as possible. While QB/WR has negative leverage, you don’t need to remove it from your repertoire. Its popularity has mitigated the value over the field, but it still has the highest share of top lineups. The biggest takeaway here though, is that stack sizes of 2 (QB + 2 teammates) are definitely being underutilized by the field, and that’s something you can take advantage of in your GPP lineups.

This is all great, but what about the money? 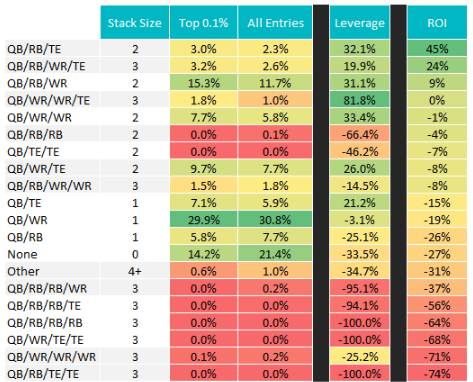 In the table above you will see we have included ROI and sorted the table so we can easily see which stacks made DFS players the most money in 2018. The numbers do not include the Milly Maker as, considering it’s a million dollars to first place on (typically) a $20 entry, it shifts a couple of buckets by a pretty large margin. Don’t worry though- an entire article for stacking in the Milly Maker is coming soon. Interestingly, the massive 82% leverage from QB/WR/WR/TE was just good enough to break even. Taking into account rake this is still a good ROI but not as drastic as it first appeared. Three stacks proved profitable for players last year and all three were a combination of an RB and pass catcher of some kind. It is safe to assume that QB/RB/RB and QB/TE/TE are only further up on this list because of sample size and nothing else. I will still avoid any of the <1% stack types as they were not effective last season.

Outside of stack sizes of 2-3 dominating again, as well as stacks including RBs being very high on the list, the big headline here is QB/WR and QB/TE coming in at -19% and -15% ROI respectively. I think this tells us that stacking just one pass catcher with your QB might not have enough juice to truly succeed in most GPPs considering payout structures and rake. If you think about it, it does seem to make sense intuitively that you need these outlier type outcomes from your teams to hit a big score, which lends itself more to a QB throwing for a boatload of yards and touchdowns, and you having the multiple teammates that benefit from that with their own huge games. In an upcoming piece, we’ll be looking at how this applies to different specific contests and field sizes to see how this data changes, if at all, by the type of contest you’re entering.

As you can see, the idea here is that stacking, in general, is still very much +EV, but stack sizes of 2 and 3 are where players have had the greatest leverage over the field and best ROI. While not always the case, we should be focusing on QB/WR when starting our stacks and adding in a RB, WR, or TE for increased correlation. Getting cute in 2018 did not work and something we should be avoiding altogether. With a better understanding of stack size and stack type, in our next article we’ll dive into how you can improve your stacking game even more by also using a player (or multiple) from the opposing team in your stacks, or what we call ‘game stacks’.

Again, huge shoutout to Brennan (xBigtymerBx here on RG, @TheDFSAdvisor on twitter), the data analyst making all this possible and helping with these articles. Make sure to give him a follow, and feel free to drop any questions or feedback here into the comments or on twitter.