In the early days of DFS, most players hadn’t figured out a lot of the strategies we now consider to be pretty obvious. Some of the first players that figured out the simple concept of correlation between a quarterback and one, or multiple, of his wide receivers (or pass catchers in general), what is now obviously known as stacking, had a pretty massive advantage over the field.

But now in 2019, we’ve come a long way from those times. Pretty much everyone understands the positive benefits of stacking your quarterback with his pass catchers, and it has become extremely popular in daily fantasy football contests.

So, in the first part of our series on stacking in NFL DFS, the clear question we wanted to answer was, with stacking becoming so popular in DFS tournaments now, should players still be doing it to gain an edge on their opponents?

I’ve been lucky enough to get to work with a data analyst named Brennan Ruby on this, and let’s be real, he’s the real brains behind the operation. He’s put together tons of great analysis and data visualization, as you’ll see, on both this subject and many others that we’re going to share with you over the coming weeks and throughout the course of the NFL season. Look out for him here on RG (xBigtymerBx) and follow him on twitter @TheDFSAdvisor. 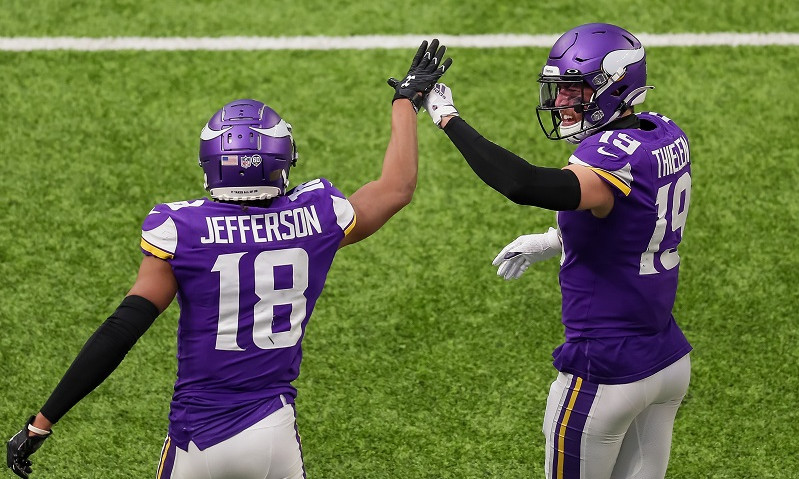 First, let’s go over a couple quick assumptions. We used ResultsDB to analyze millions of entries from 2018 in every major main slate tournament on DraftKings, including 150 max entry, 3 max entry and single entry. Additionally, we are looking at only stacks that include your QB and 1 or more of his pass catchers. Defenses are excluded, and non-QB stacks such as RB/Defense are excluded. (Don’t worry, we’ll definitely be getting into those and much more in future articles). We know that stacking was advantageous in past years, but did that trend continue in 2018 as it also increased in popularity?

How often were people stacking in 2018?

In the graph above, it is assumed that every lineup has a QB, so the stack size number represents how many pass catchers (WR, TE or RB) on the same team as the QB were used in the same lineup. So, zero represents playing the QB without any of his teammates. A stack size of one would represent the QB with one teammate, I.E. One of his WRs, like Ben Roethlisberger & Antonio Brown, etc. You get the point.

Last year we saw 79% of tournament lineups have some sort of stack. Unsurprisingly, the stack size of 1 was by far the most popular at 44%. Stack sizes 1 & 2 made up 72% of lineups with only about 7% of lineups with full onslaught stacks (stack size 3 & 4).

Seventy-nine percent. That’s a pretty big number. Can you still get leverage on the field when that many people are stacking?

The graph above shows how often the top 0.1% of lineups were stacking broken down by each stack size. We use the top 0.1% of lineups because we don’t want to just look at the lineup that won the tournament because the 1 winning lineup can often come down to a little variance compared to other great lineups. And we don’t want to look at just lineups who finished in the money because not all of those lineups actually had a chance to win a tournament. And we play tournaments to win them. What we really want to know is what are the lineups that were in contention to win tournaments. If you can consistently put yourself in contention to win tournaments with top 0.1% lineups, eventually variance will break your way for a big score.

For a stack size of 1, the numbers are pretty even. The field is at 44% and the top 0.1% of lineups are at 43%. Last year’s biggest difference, and thus the greatest leverage on the field, came from the stack size of 2 (something like a QB/WR/WR stack) with just 28% of the field, but 36% of the top lineups. This certainly doesn’t mean you should avoid stack size 1, but I think where the leverage on different stack types really starts to get interesting is when you apply it to different types of contests and field sizes like the Milly Maker, Single Entry, or even the Thunderdome or Live Final Qualifiers. Shameless teaser – we’ll be diving into that in another piece soon.

The leverage created over the field is certainly not as big as it was years ago, but even with the increased popularity, we saw that you can still gain an edge on your opponents simply by using this pretty simple correlation. 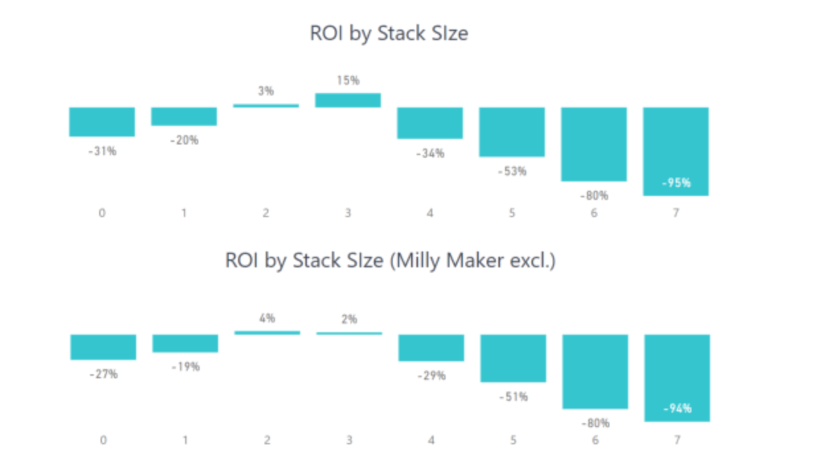 So, we’ve established that it’s still advantageous to stack. Even if the edge is smaller now, in DFS we’re looking to find as many edges as we can, no matter how small, to give ourselves a chance at winning GPPs. But at the end of the day, people play to win money, right? So what kind of return on investment are people getting on these different stacks?

We know that most people don’t make a significant ROI on DFS tournaments. And the above chart definitely makes it look worse since the ROI is so bad on the huge stack sizes (5+). But the volume of entries of those stack sizes are extremely small, and those lineups are just about guaranteed losers, so we’d expect the ROI to be really bad. If anything, that chart can remind you no matter how many points you think the Chiefs are going to score, don’t play 6 Chiefs in one lineup.

However, the interesting thing is that both the 0 and 1 stack sizes had negative ROIs in GPPs last year. The real winners were size 2 and 3 as the only positive ROIs stacks at all. If you combine stack size 2 being the highest leverage with the fact that it’s also positive ROI, I think that tells you a lot about the positive benefits of lineups like QB/WR/WR.

In the 2nd ROI chart, you see that we removed all Milly Makers from that data. Reason being, we know Milly Makers are extremely top heavy (duh, $1 Million to 1st place), and a super top-heavy payout can skew your ROI numbers. What was extremely interesting to me when you remove the Milly Maker is how drastically the stack size 3 falls off in ROI, down from 15% to 2%. Seems to me that a stack size of 3, or what most people like to call an onslaught, has been wildly successful from an ROI perspective in the Milly Maker, but we saw that it’s only used about 6% of the time in tournament lineups. Shameless teaser number 2 – we’ve definitely got an article coming soon on this subject. I mean who doesn’t want to win a million dollars?

All in all, I think most DFS players now recognize that stacking should be a staple of your lineup building process for NFL, but even so, there are still edges to be gained by stacking in GPPs. I think we’ve outlined some of the basics of that here, and we’ll soon be coming out with a ton of follow-up pieces around more specific stacking strategies, as well as other tournament and cash game analysis.