Like driving a new car for the first time, the thrill of putting together a powerhouse fantasy team on draft day is hard to beat. For even the most grizzled fantasy vet, the draft often becomes the most fun part of the season, as leagues can feel like a tedious marathon at times. Between keeping up with the constant revolving door of news blurbs, grueling weekly transactions, trades, and setting lineups, the sport of fantasy sometimes feels more like a chore. That’s where best ball comes in. Draft your perfect team, then sit back and enjoy your maintenance-free, weekly-optimized lineup take down the league championship for cold hard cash.

The point of this ever-growing format is simple, take the most fun aspects of fantasy football, namely drafting and prizes, while getting rid of the baggage that comes with the season long and dynasty formats.

Like any traditional league there are plenty of options. You pick a platform (see below chart), pick your league size, choose a draft time and date, select your entry fee, and you can even choose the speed at which the draft occurs. Once you have selected your squad its time to kick back and watch your team move up the standings week by week.

Speaking of Yahoo, the longtime redraft platform just released their version of the set-it-and-forget-it format. What makes Yahoo unique is the team with the highest score each week gets a bonus payout. Another incentive is that the ADP is incredibly soft. For example Patrick Mahomes ADP on Playdraft is 36 while Yahoo has his ADP at 18 overall.

We’ll talk a little bit about strategy later on in this article but let’s start with the basics of how it works. Lineup scoring is optimized each week, meaning highest-scoring players by position will automatically be inserted into your starting lineup at the end of the week. The team that racks up the most points through Week 16 is crowned the winner. Stop me if you’ve heard this before, but I can’t stand when the highest-scoring fantasy team doesn’t win the championship after having an off week. The top scorer in this format always comes out on top.

There are so many varieties of fantasy football out there nowadays, so why try the best ball format? The simplest answer is that the format provides you convenience, improved drafting skills and flexibility.

I touched on the ease of the draft-only style of play, but an underrated bonus of low-maintenance leagues is the preparation that best ball necessitates from players. The draft-and-hold format forces fantasy gamers to become comfortable with the high pressure and quick decision-making ability that is necessary to rule draft rooms, a skill that can then be applied to other formats.

Mock drafting is a flawed process that often fails to replicate the real nature of drafts. Because money is on the line, best ball amplifies the level of competition and therefore the advantage gained. This happens through familiarization with the ebb and flow of ADP, picking from different draft slots, repetition of draft selections, and employing unique strategies.

Another smaller but enjoyable part of this game type is that fielding multiple teams leads to a greater player pool of exposure. I’m sure we have all been in a situation where you wished you had more shares of a certain player. Playing in multiple draft-and-hold leagues is a great way to alleviate such issues.

My favorite aspect of best ball is the opportunity it allows for players to diversify their dollar exposure. The average fantasy owner might be in two leagues and spends $75 in entry fees. In this format you can basically hedge your bet by entering a larger volume of contests (with less work) for the same aggregate amount. If one of your teams is decimated by injury, you diversified your portfolio enough to still come out on top with a positive return on investment (if you draft well for the other squads).

Although the format might be stripped down, don’t think for a second that the strategy is diminished. Ultimately the goal is to take down the league title but the journey to the top is nuanced and multifaceted. Your player evaluation must be on point. Roster construction has to fit the optimized build. Every ounce of value must be squeezed out of draft sections. The good news is there are plenty of tools to put fantasy gamers in position to be successful.

Roster construction is just as important as player selection. For example, drafting a backup quarterback with the same bye week as your starter defeats the purpose of the pick. Drafting several injury-prone running backs and then focusing on extra wide receivers is a recipe for disaster. It only takes a quick push of the button to screw up a portion of your draft. A way to mitigate such risks is to understand the win rate for each position in each best ball platform.

The below chart displays the optimal build based on win rate for each best ball platform for 2018 (per Rotoviz). 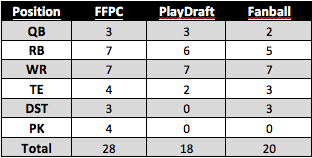 Looking further into one of these platforms, last year the roster build with the highest combined win rate on Playdraft can be seen in the below table. The second image is a recent draft I did using the same build. Its not a perfect team by any means but the build is at least optimal, which in theory increases success rate. 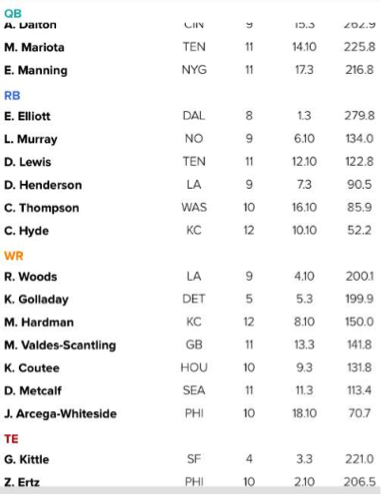 Unlike in season long leagues, volatile players are not only encouraged but required. Strong best ball targets have high upside, the potential for a significant workload and the likelihood of being tethered to a strong offense.

Last year my favorite late round target was Tyler Lockett. The Seattle offense was in a state of flux with a new coordinator, a Paul Richardson exit, and Doug Baldwin injured. Lockett hadn’t shown much in 2017 but did finish in the top 15 in target separation to go along with upper 90th percentile speed. For me he checked almost every box as a late-round dart throw.

This year Marquez Valdes-Scantling could have a similar path to fantasy stardom. Scantling is cheap ADP wise, in a positional battle he’s likely to win, possesses elite athleticism and has Aaron Rodgers throwing to him.