Building lineups in a spreadsheet can be really easy if you set yourself up with a good foundation to build from. For starters, take a look at this lesson from Microsoft Office on how to set up your fantasy football team with the same general principles for daily fantasy basketball.

Step One: Define Your Variables

In this instance, you are searching for the optimal lineup based on some projection model. I personally set up my Excel file so I can paste in a daily update with the following organization of columns:

Beyond this you can set your file up so you can weight your projections to better fit what you want to find. So if a guy is a late scratch, you can mark that player to a weight of 0 quickly and then adjust his replacements up to quickly recalculate the optimal lineup.

Setting up the Solver Sheet

Open a new sheet. In this sheet you’ll want to set up the columns as shown below. NOTE: In this example, I am looking at working with FanDuel. Use the Excel lesson linked above and trial and error to work this same process out for other sites, but understand that the process is somewhat different for other sites.

That formula will produce the largest projection number of all players into Cell D2 of the Optimals sheet. Drag that down to Cell D201. The annoying aspect of this is you’ll have to go through each cell manually and change the “1” in the formula above to 2,3,4, etc. all the way down to 200.

This formula will return a player name associated with the projection number.

The values returned in Columns F-J will tally the number of players at each position being used in your optimal lineup later on in the calculation process.

So for Cell F2, under “PG”, I would use this formula for FanDuel:

And here would be the other positional formulas:

Setting Up the Calculator: Part 1

For the next section, you’ll want to highlight an area of your OPTIMALS sheet so you know where these formulas are. We’ve dragged the stats discussed above down to Row 201, so I use Cells A202 through J208 (as shown in the image below):

To keep this simple and understandable, I’ll just breakdown the formulas in each cell:

Ready to Set Up Solver

Alright you’re finally ready to set up Solver. Go to the Data tab and on the far right there should be an option for ‘Solver’. If you don’t see this, you’ll need to go to the Add-Ins page on ‘Options’ and enable Solver.

Open up Solver and, for FanDuel, enter the parameters exactly as shown below: 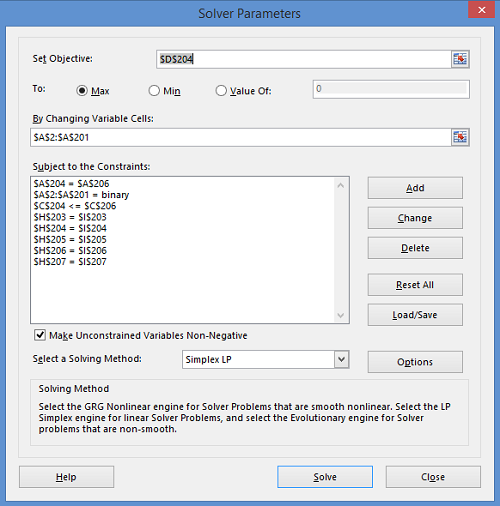 Hit “Solve” after you’ve set up the parameters and you’ll see the number 1 in Column A of the file. The players with a 1 next to their name are the guys who made your optimal lineups.

There are infinite options of how you can build your own file out to make it bigger and badder but for the case of this lesson I thought I’d try to keep it as simple as possible. Excel is a tremendous tool and using Solver to create optimal lineups can be applied to any sport and site for DFS purposes!