For the most part, you want to approach head-to-head and 50/50 leagues in the same way, maximizing your team’s floor. You don’t need a 380-point night in NBA to take down a head-to-head or 50/50 league.
That means your strategy should be all about safety—targeting the safest possible players. Interestingly, there are perhaps some erroneous beliefs regarding what constitutes “safety” in the NBA.

Sometimes, you can acquire safety through versatility. Mobile quarterbacks and pass-catching running backs are high-floor NFL plays, for example, because they’re less dependent on a specific game flow to acquire points and they can beat defenses in a myriad of ways. In contrast, if the Redskins get down big, a player like Alfred Morris can give you next to nothing since he doesn’t catch many passes.
Some have extended that idea to NBA, but I don’t think it’s warranted. That’s primarily because certain NBA stats aren’t correlated with game flow in the same way as in the NFL; a center isn’t necessarily more likely to block a shot if his team is winning by 15 as opposed to down by 15. Blocked shots are low-frequency events no matter how you slice it.

One-Dimensional Players Can Be Safe in the NBA

Ironically, many of the NBA’s most one-dimensional players are safer than their versatile counterparts. Namely, the top scorers often possess high floors because points are distributed more evenly than other stats from game to game.

BriPC has a ton of awesome research in the Masters sections on player and stat variance. From his article on stat variance:

I calculated what each player averaged across all relevant statistics (points, rebounds, assists, steals, blocks, and turnovers) throughout the season. This allowed me to calculate fantasy points, and I used FanDuel scoring in doing so. For each and every game for every player in my dataset, I then calculated how their performance in these categories differed from their season projection. Doing so allowed me to make cool graphs like below. 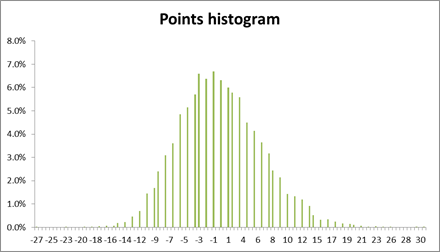 That is the distribution of points scored above or below average for each player in every game, with frequency on the vertical axis. It is important to remember that zero is each player’s individual average. Obviously Kevin Durant scores more points than Jimmy Butler, but we do not care about that. We care about how often and by how much Kevin Durant and Jimmy Butler deviate from their expectation on any given day. Therefore, it was necessary to normalize the data around each player’s seasonal average. You can see that the distribution is very symmetric, with an almost equal probability of a player overachieving or underachieving in any one game. To get a sense of magnitude of deviations, I calculated the stats below.

The blocks distribution has by far the strangest distribution of all, with a large spike at around -0.2 blocks.

I conjecture that this is because most guards average around 0.2 blocks per game and their most likely outcome for any one game is that they record no blocks. I believe that this finding has implications for GPP strategy.

Because the distribution is so right-skewed, it may make sense in tournaments to pay for players that contribute a disproportionate amount of their fantasy value from blocks since they vary a lot and a player can outperform his season averages in this department to a large degree. As an example, take a look at someone like “(player-popup)Roy Hibbert”:/players/roy-hibbert-1488’s game logs. While he average something like three blocks per game, it is not uncommon to see games of six, seven, or eight blocks. Doubling or nearly tripling a season average in one category (especially when that category gets two fantasy points) is valuable in tournaments and is something that is not common in other categories such as points.
There’s more evidence of safety in one-dimensionality here: 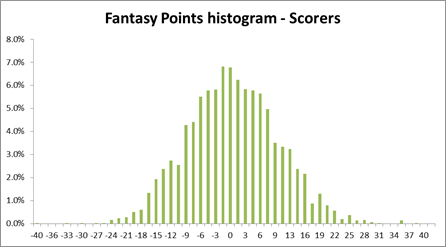 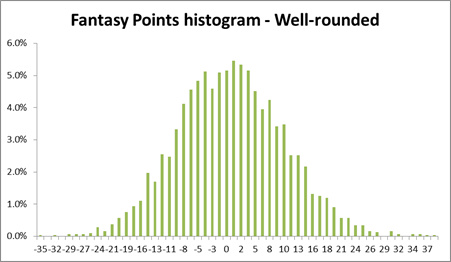 The effect might be small, but it’s still amazing that pure scorers match their projection more consistently than well-rounded players. Versatility might equate to safety in the NFL, but not so in the NBA. That means that paying for versatility in both head-to-head and 50/50 leagues isn’t going to increase your win probability. You’re better off going with pure scorers.

Difference Between Head-to-Heads and 50/50s

Viewed in terms of your lineup creation, there isn’t a difference between head-to-head and 50/50 leagues; you should be trying to maximize your team’s floor in each.

In regards to money management, however, there’s a massive difference. Namely, while 50/50s are safe on the individual level, they become extremely volatile as you enter a single lineup into more of them. The opposite effect accompanies head-to-head leagues.

Let’s say you enter the same lineup into one heads-up league and one 50/50. There’s a small but real chance that a top-tier score gets beat in the head-to-head matchup, but no real chance of that happening in a 50/50. The latter league type has more individual safety.

Now let’s say you enter that same lineup into 100 heads-up leagues. You’re actually minimizing risk (assuming you can afford it with your bankroll) because you’re increasing the chances of a linear payout. If you enter 100 head-to-head leagues and finish with a score in the 35th percentile, you won’t lose all of your money; you’ll win pretty close to 35 percent of those leagues. If you could theoretically enter one million heads-up leagues with the same lineup, you’d be all but guaranteed to get paid out in 35 percent of them.

Meanwhile, think about what would happen with a 50/50 score in the 35th percentile; except in very rare cases when you enter a league with abnormally poor scores, you’d lose all of your money. That’s because 50/50 leagues are non-linear; if you finish one place outside of the top half, you’ll lose your entry fee.

Thus, the risk associated with each league type looks something like this:

Using a single lineup in more and more head-to-head leagues increases safety; the opposite is true of 50/50s. The tradeoff is that you can increase your upside with single-lineup 50/50 entries, but for pure safety, heads-up leagues are superior.