We talk about variance quite a bit in RotoAcademy because understanding and utilizing it is crucial to your daily fantasy success. BriPC has some amazing information on the variance of specific league types in the NFL section of RotoAcademy, as well as some incredibly in-depth analysis on the specific variance associated with particular stats and player types in the PhD section of NBA.

To prep you for the latter content, I’m going to take a broader look at variance, why it’s important, and how you can implement it to increase your bottom line.

Simply put, variance measures how much and how frequently certain stats deviate from the mean, i.e. it’s basically a measure of how much randomness is associated with a particular event. We logically know that there’s more variance associated with blocks than, say, points in the NBA. But the degree of randomness and how it manifests itself is vital in accurately predicting player performances.

Variance matters because our projections are only as good as the confidence we have in them. That’s one reason that it’s foolish to pay for kickers in the NFL, for example; you can project a specific kicker for a certain level of points that makes him the top $/point value, but there’s no sense paying up for him if you can’t be confident in that prediction.

In short, we’re looking for how much consistency is inherent to each stat or player type. In daily basketball, we want to know how consistent specific stats or types of players remain from night to night. The more consistent the stat, the more confidently we can project it on a nightly basis.

When to Embrace Variance

All other things equal, we want to pay for consistency when trying to increase the floor of our lineups, i.e. in head-to-head and 50/50 games. When safety is key, the goal should be to rack up as much of the “sure thing” as we possibly can.

In the NFL, for example, I’ve found that mobile quarterbacks and pass-catching running backs possess more week-to-week consistency than pocket passers or one-dimensional backs because they aren’t as susceptible to game flow. In general, I target those types of players in head-to-head games because they have less variance than many other players.

You don’t always want to avoid variance, though. Sometimes, variance can be your best friend. Specifically, you can and should target high-variance players and pay for high-variance positions when you want upside, i.e. tournaments.

To show you why this is the case, I charted the hypothetical outcomes for Player X (blue) and Player Y (orange). For the sake of argument, we’ll assume that there are 15 possible outcomes for each player and that we can predict the distribution with perfect accuracy. Note that the total points (and thus mean projection) for each player is exactly the same. 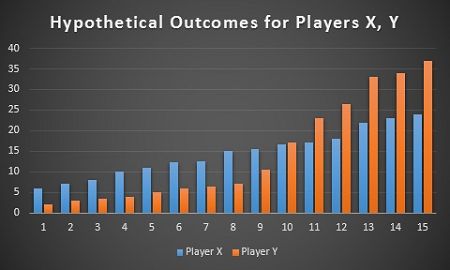 In reality, we obviously can’t predict fantasy score distributions perfectly, but we can get close. More important, we can know which numbers and which types of players possess the most variance.

Even if we didn’t know the exact potential distribution of fantasy scores listed above, we could know that Player X is far less volatile than Player Y. Night in and night out, Player X has proven to be more predictable. In this case, he has a high floor and low ceiling.

Player X’s game would make him perfect for use in a head-to-head or 50/50 league. Even though his mean projection is the same as Player Y, he’s far less likely to lay an egg, meaning he won’t tank your lineup. If you fill your lineup with enough guys like Player X, you can dramatically increase your long-term floor.

But because Player X doesn’t have a high ceiling, he’s not of particular use in a tournament. When you’re in a 1,000-man GPP and you need massive upside, you should be targeting players like Player Y—those who could potentially give you next to nothing, but who also might light up the scoreboard.
In that case, paying for variance is smart. In both cases, you can see why mean projections aren’t nearly as valuable as ceiling and floor projections. Both types at least partially capture variance.

Finally, I want to mention that while variance necessitates unpredictability in some senses, it can also become quite predictable. When you’re dealing with outliers—measurements at one extreme of a distribution or the other—you can ironically obtain a whole lot of predictability.

When you’re predicting a particular stat or player that you know has a whole lot of variance, the most likely outcome is that the next measurement will fall somewhere near the mean. That means when the previous measurement or set of measurements were extreme, they’re highly likely to become less extreme in the future.

If you roll a pair of dice and get 11, for example, the odds of rolling higher than that on the next roll are slim. We can know that despite the fact that rolling dice is more or less a random event (at least in terms of our knowledge of the outcome).

Much of daily fantasy is about locating stats that are actually pretty fluky—possessing a high degree of randomness—and then betting on those numbers to regress toward the mean when others are predicting them to remain steady. That’s ultimately how you acquire value on underpriced players and fade players whose salary is too high for their anticipated future production.