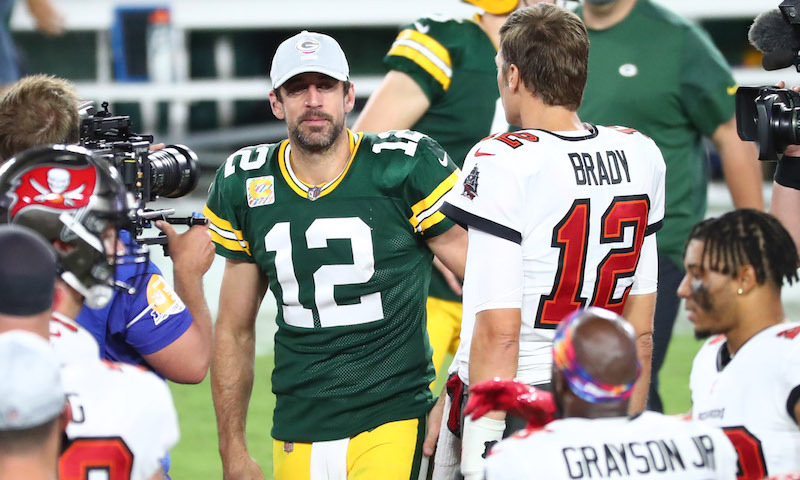 The Divisional Round was a bit underwhelming, as were my betting picks, but the outcomes leave NFL bettors with a Championship Sunday that features two of the greatest quarterbacks of all time and two of the youngest stars in the league, and a 25-year-old who already has an MVP and Lombardi Trophy to his name.

For starters, we finally get a Rodgers vs. Brady playoff game. It’s not the Super Bowl matchup that football fans have been dreaming of for years, but it’s the next best thing.

Over in the AFC, we’re hopeful for an exciting shootout between Patrick Mahomes and Josh Allen, but a divisional-round injury to Mahomes made it no easy task for online sportsbooks to open AFC Championship lines Sunday evening.

Let’s take a closer look at AFC and NFC Championship lines across the sports betting industry.

Here’s a crazy stat: With his win Sunday night in New Orleans, Tom Brady has as many playoff wins (8) against NFC teams as Drew Brees.

Brady’s Tampa Bay Buccaneers will travel a bit farther and may even have to take on the snow in the NFC Championship. The weather in the Frozen Tundra might be a factor had the Saints won, but frigid temps certainly won’t bother Brady.

Despite being blown out by the Bucs in Week 6, the Packers play host as 3.5-point favorites. In their previous meeting, the Bucs’ front seven overwhelmed a Packers offensive line that has otherwise been impressive. As a result, Rodgers had not only his worst performance of the season but one of the worst performances of his career, which included only his third pick-six ever (and almost a fourth).

Tampa Bay’s defense could disrupt Rodgers again with the same formula they used before. The presumptive MVP has struggled when under pressure this season, but such instances have been few and far between, in large thanks to what has been one of the best offensive lines protecting Rodgers. Making things a bit tougher, though, the Packers will be without All-Pro left tackle David Bakhtiari.

Bakhtiari has been out since Week 17, yet the Packers’ offensive line held strong against the Rams and Aaron Donald. Donald wasn’t 100%, though, and part of the problem in Week 6 was that the Packers were without Bakhtiari for much the second half.’

For a more in-depth look at this matchup, including a weather forecast, injury updates, props and more picks, check out this NFC Championship Betting Preview.

Can the Packers Slow Down the Run?

Led by Ronald Jones, with assistance from Leonard Fournette, the Bucs have had a healthy running attack for much of the season. Their running prowess was on full display in the teams’ first meeting, as Jones and third-string running back Ke’Shawn Vaughn combined for 155 yards on the ground.

However, one a Packers should be better prepared to stop the Bucs’s running game this time around.

The Packers have consistently struggled against running backs through the season, as Mike Pettine’s dime scheme regularly gives running backs ample opportunity to gain yards. However, fully aware of their vulnerability in the trenches, Pettine and Green Bay’s front office astutely called for help and claimed veteran and former All-Pro defensive tackle Damon “Snacks” Harrison on waivers. Snacks didn’t see a ton of time against the Rams, but don’t be surprised if his role increases as the Packers try to slow down Jones and Fournette.

Aside from their running defense, the Packers haven’t given bettors many reasons to doubt them this season. It’s why oddsmakers make them 3.5-point favorites ahead of the NFC Championship.

As a Green Bay fan, I wish I could be as optimistic.

While the Packers continue to prove me wrong (yes, I layed points against the Rams and the Titans), +3.5 points to the Bucs seem like one or two points too many.

The Bucs not only have the No. 1 overall DVOA (one spot ahead of the Packers) and match up well with Green Bay, but I also wonder if Packers have been beneficiaries of a relatively easy strength of schedule. Not including the Bears, the Packers only beat two of the four playoff teams they played during the regular season.

Considering all of the injuries the Rams brought along to Green Bay, Saturday’s playoff win didn’t alleviate my skepticism.

The Bills have won more playoff games in the last two weeks than they had the previous 25 years combined. We might not have as many videos of Bills tailgates, but I have a hunch that plenty of plastic tables are being put to good use by Bills Mafia.

Now the Bills have an opportunity to return to their first Super Bowl appearance since 1994. The man standing in the way? Patrick Mahomes — maybe.

An awkward tackle in the third quarter against the Browns sent Mahomes to the locker room, where he was then ruled out for the remainder of the game.

The Chiefs prevailed with Chad Henne at quarterback, whose presence did nothing to deter Andy Reid’s aggressive playcalling. Reid’s brilliance was on full display in the final minutes against the Browns. Fourth-and-one with the game on the line, Reid spread out Chiefs’ wide receivers, leaving only Henne in the backfield. Disguised as nothing more than an attempt to draw the Browns defense offsides, even Tony Romo was made a fool when Henne unexpectedly took the snap and delivered a short victory-clinching pass to Tyreek Hill.

As Mahomes tweeted out, #Hennethingispossible.

Henne finished the job against the Browns, but the Chiefs will need Patrick Mahomes to keep pace with Bills passing attack.

On Sunday night, oddsmakers contemplated how to approach the Bills-Chiefs AFC Championship game with Mahomes’ status in question. Different sportsbooks came up with different answers.

A couple of shops had the AFC Championship as a pick’em Sunday evening. That number didn’t stay up very long before the spread quickly fell in line with the rest of the sports betting industry. Some shops opened the Chiefs as 4.5-point favorites, but you’ll currently find Chiefs -3 at most sportsbooks.

The AFC Championship shows that oddsmakers assume Mahomes will be ready to play on Sunday, but I still think the spread will stretch a point or two if/when he’s ruled active.

Wednesday Update: Ian Rapoport reports that Mahomes will have a light practice, but doesn’t have any symptoms and his workload is expected to increase throughout the week. Good news for Chiefs bettors.

Kansas City hasn’t covered the spread in nine weeks, and the Bills have been the most profitable team to bet on this season. But as Reid showed against the Browns, the future Hall-of-Fame coach left plenty of tricks up his sleeve for the playoffs. No, those tricks weren’t enough to cover the spread against the Browns, but Kansas City’s offense only scored three points after Mahomes went to the locker room.

Another thing worth noting is that these teams also met up in Week 6. The Bills have since made clear they are real Super Bowl contenders, but the Chiefs were 5-point road favorites and went on to cover the spread with a 26-17 win. Now they’re only three-point favorites at home.

If Mahomes plays, there’s value on the Chiefs -3 in Arrowhead.

The last update on Mahomes injury was that he didn’t hit his head but instead tweaked a nerve in his neck. He passed all tests Sunday night, which is a good sign, but he’s still under the league’s concussion protocol and will have to pass a 5-step test to play.

If you want to bet the Bills, you should wait if you think Mahomes will be active; bet now if you think he’ll be inactive.

If you want to bet the Chiefs, you should bet now if you think Mahomes will be active; wait if you think he’ll be inactive.

And if you’re unsure what to do and want more clarity regarding the Mahomes situation, then wait until more information becomes available. As the odds change throughout the week, our NFL line comparison tool (pictured at the start of this section) will update accordingly.

Rather than trying to use the current uncertainty to find an edge against the spread, I prefer betting Under 53.5 points. If Henne starts, then this total will almost certainly fall below 50 points — I’m thinking 48 or 49. Even if that’s not the case, based on how Kansas City previously attacked Buffalo’s defense, this Under still has a decent chance of hitting if Mahomes plays. In that Week 6 game, the Bills dared the Chiefs to run the ball. The Chiefs happily obliged, carrying the ball 46 times for 245 yards and a touchdown — their best running performance of the season — while dominating time of possession (37:45).