An Introduction to Daily Fantasy Hockey

For those of you that are new to daily fantasy hockey or have not yet made the jump and need a quick overview on the game and some basic strategy, this is the article for you.

The objective is to rack up the most fantasy points from your roster by having your skaters record points through shooting the puck, scoring goals and notching assists and also having your netminder earn a win and save as many pucks as possible and maybe record a shutout.

UPDATE: DraftKings has updated their scoring system ahead of the 2019 season!

The way to win may sound obvious, but actually accomplishing this goal is a difficult task. Of the major daily fantasy sports, your NHL games may be some of the lowest scoring contests that you play in and one shot may be the difference between cashing and not cashing. On FanDuel, you must compile a roster of eight skaters and one goalie. That is, staying under the given salary cap, you must select two LWs, two RWs, two Cs, two defensemen and one goaltender. On DraftKings, your roster consists of two centers, three wingers, two defensemen, a flex, and a goaltender.

If you want to cash on any particular night, you really must hit on the goaltender on a winning team, and you generally need to have at least three goal scorers. You can also win with depth players (who are often the ones who put the puck in the net with helpers from your stars) and with those who shoot the puck a ton and/or garner a lot of “live” statistics such as blocked shots.

Thus, make sure that you understand your site’s scoring system. I know that this mantra is pounded into your head with the start of every fantasy season, but it is worth me saying again. Each DFS site weighs goals and assists differently, just as they value goalie wins in a different manner. What this means is that it is in your best interests to pay up for a goalie on one site, or spend on that top sniper on an another site, because FanDuel and DraftKings, for example, each weigh those relative statistics amongst total projected winning scores differently. On FanDuel, a goalie win may account for much more than that same task counts on DK. Thus, when building your projections or your lineups, make sure you take the relative differences into account. Think about paying up for your goaltender on FanDuel similar to paying up for pitching on the site.

The first thing I do on any given day is jot down some notes about the Vegas lines, whether it is the money-lines or over/unders, in order to help assess where the money is going. Some of the information I will write out is accessible to the public, but my information with respect to sharp money and betting trends stems from my own read that I attempt to convey in each piece that I will write for RotoGrinders. The thought here is that Vegas spends much more money and energy in setting accurate lines than we spend on any given day playing DFS hockey. As such, we can assume that the information that Vegas releases is as solid a base as any from which we may start our lineup building.

The next thing I do is to take note of the lines that players are likely to play on that night. Then, I take a look at which goaltenders are set to start that night. Make sure you check the RotoGrinders Starting Goaltenders page to ensure that you are starting a goalie who is actually in net that night. Most NHL beat writers tweet out this information an hour before the game (if not earlier in the day after the team’s morning skate) after their team’s coach confirms the goalie. However, some coaches will not make this decision until right before the game while the Zamboni is cleaning the ice prior to puck drop. Knowing who the starting goalies are each night is really no different than ensuring in daily fantasy baseball that your players are actually in their respective team’s starting lineup. 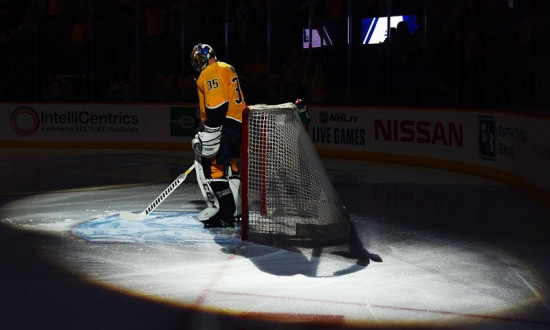 Now that you have all of your data written down or scribed in some form, take a look at, for example, FanDuel, and note each players’ salary. Personally, I always start out selecting my goalie. I will take the cheapest goalie of the top tier netminders on the team that is likely (according to Vegas) to get a “W”. The thought here is that FanDuel weighs goalie wins heavily (comparable to a pitcher’s win in baseball) so you want to “pay up” for a goaltender, or at least pay up for the one of the elite netminders. This theory is true when building your cash-game lineups.

Remember that my strategy is just a suggestion and is one that I do not always follow. The critical point is that you should always commence your lineup on any given night with your goaltender. Each goalie on each team has a different floor and, necessarily, a different upside. One big mistake that you can make is to limit your goaltender selection by building around your skaters first. Another mistake that novice players make is to take an elite goalie (think, Carey Price), who may carry a $10K+ on FD price tag, when he is skating against a team with an offense so bad that they will not be able to shoot the puck enough. The reason is that because goalies earn points for saving shots, if an opposing team is unable to muster much firepower, then your elite goaltender will not be able to return his price tag even if he earns the win.

Once I have my goalie, from there I add a couple of core superstars and then add in the remaining puzzle pieces. At points during the season, especially in your cash-game lineups on short-slate nights, you will almost feel obligated to play, for example, Sidney Crosby or Alex Ovechkin every night, because you know that even though they come with a high price tag, you do not want to be the one daily fantasy player without them in the lineup. This situation happened during the last NBA season when it was almost impossible to not roster Russell Westbrook despite his rising salary each night.

The hardest part about setting a daily fantasy hockey lineup is finding those value or bargain bin players. To do so, pay careful attention to a team’s lines, and note whether a value player (in other words, a player with a cheap price tag) is playing with the first line or second line. It is a bonus if this value player is expected to see power play time. Much like NFL, MLB or NBA DFS, pay particular attention to cheap players who are getting a significant bump in responsibility. That is, if a skater who typically sees third-line usage and is suddenly projected to skate with his team’s top line and first power-play unit, then to roster that player you will have to pay a fraction of what you would pay for another skater in a similar situation that usually sees the same usage.

For example, Jonathan Toews will see first line and first power-play unit time, but he is usually one of the most expensive players to buy each night. If a less talented player replaces Toews one night, you can roster him for much less cap space, and you know he’ll be skating with more talented linemates than he may be used to skating with. So, lock him in and then use that savings to spend elsewhere, say, on a more expensive goalie than you had planned on rostering before.

Lastly, on short-slate nights, be on the lookout for offensive-minded defensemen that log 22:30 minutes of ice time per game or more. You may be in a position in which you want to spend top dollar on that D-man. If you roster that one blueliner who notches a few assists or records a goal when there are three, four or five games on a night, you should usually cash in your double-up games. The thought is that a high-priced, offensive defenseman is more likely to at least reach his value when compared to a similarly priced forward that might get second power-play unit time in a poor matchup.

In the end, succeeding in the daily fantasy hockey landscape is as much about following the game on a nightly basis as it is in making the right roster choices. If you become adept at finding and exploiting salary inefficiencies, then you will be able to maximize the firepower of your lineup each night. As you follow the NHL news, you will spend less time trying to find holes in players’ salaries and more time building optimal lineups. Remember that daily fantasy hockey is still a small (yet growing) world, in comparison to NFL, MLB and NBA, so if you learn the game, you should be highly profitable.

Over the course of the season, I will be sure to include more advanced strategies in my pieces. One of the primary tools that the hockey world has been rapidly accepting are advanced analytics. While there is no perfect statistic that encapsulates a skater’s worth like say, xFIP, win shares or wRC+, us hockey analysts have been crunching numbers in an attempt to be the first to create that one metric that accurately measures a skater’s value. Until then, we must keep using Corsi, Fenwick and other analytics that are designed to track puck movement and puck possession.

Thus, in taking skaters from not only games that Vegas projects will have high over/unders and also from games that project to be high-event games from the Nils Model, we can maximize the probability that our team has a chance at scoring more points than a team from a DFS player that did not do the same research.

We will be including more advanced statistics on RotoGrinders this year so please make sure you check back frequently and also feel free to contact me on Twitter @TheTonyM with any DFS NHL questions.