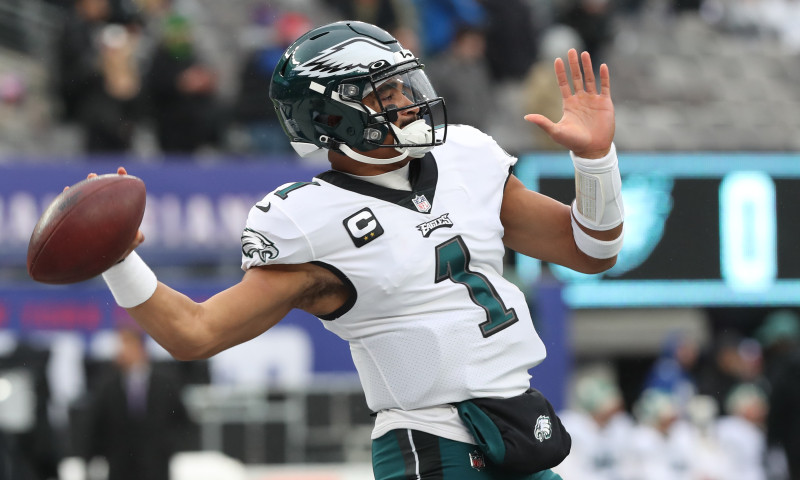 What a great time for a sports fan to be alive. We’re drafting fantasy hoops squads ahead of next week’s opening tip, the MLB Playoffs are cranking, the puck has dropped in hockey, and the NFL season has been insanely entertaining through five weeks. And what do you know, it’s football time again, with the defending-champion Buccaneers entering hostile territory in Philadelphia for Thursday Night Football to kick off Week 6. I want as many shares of this game as possible, so obviously I’m electing to assemble a Same Game Parlay on PointsBet.

A Same Game Parlay basically just means a parlay consisting of multiple correlated wagers from one specific game. It provides bettors with good options to bet a game—and piece together props into a parlay within that game—beyond just the standard spread, moneyline, and over/under totals that you’re used to seeing at sportsbooks.

Here’s an example of my Same Game Parlay recommendation for the Sunday Night Football game between Green Bay and San Francisco a few weekends ago that paid out +834 odds:

If you played this custom-made parlay, you would have woken up $834 richer the next morning. Same Game Parlay is a quick, easy, and extremely fun way of betting one specific game—and building a big potential payout—without being confined to the typical lines and spreads.

The OVER on primetime games was becoming a stone-cold lock, going 6-0 through two weeks and 8-1 through three. But since Week 4, oddsmakers have increased the totals (while defenses have likely improved), and we have seen some regression to the over/under mean. Of course, your fair-weather bettor probably fails to realize this, and auto-smashes the OVER in a game involving Tom ‘GOAT’ Brady and the reigning champs against the questionable D of the Philly Eagles. Well, let’s be smart and avoid the total points over/under altogether. Instead, consider opting for a points band, which essentially gives you great value to lock one (or both) of the teams into a total scoring range.

I’m going with Philly to score 21-30 points, because it’s very safe and yields a +140 return. The Eagles average 23 points per game, Tampa allows 24.4 points per game due to a surprisingly-bad secondary, and second-year Philly QB Jalen Hurts will have to play aggressively to keep up with Brady’s embarrassment of offensive skill-position riches. Start the parlay with a solid moneymaker.

Here’s another low-risk, decent-reward prop. In addition to the aforementioned ‘bands,’ PointsBet also offers different ‘margins’ of victory. For this game, I’m selecting Margins 13.5 and going with the Buccaneers to win by between one and 13 points. Side note: it’s wild to me that Tampa by over two touchdowns is only +185—what a sign of the Bucs’ dominance!

The thing is, Jalen Hurts has been really, really good this season. He’s almost a lock to be a top-five fantasy scorer week in and week out. But he’s also young, inexperienced, and sometimes sloppy. So, while I like the Eagles to compete at home—and score at least a few touchdowns—I don’t like them to win. But while I have them losing, I don’t have them losing by two TDs. Got it!? Primetime games always find a way to be at least a little interesting, and the Eagles lost by 12 the last time they faced a powerhouse offense (vs. KC, Oct. 3). This is a sneaky cheap way of betting the Bucs’ moneyline and simultaneously getting the Eagles at home at +13—and all while getting value!

Some young QBs lead their offense — Jalen Hurts pretty much is Philly’s offense. As he goes, so too do the Eagles (say that five times fast). In both games that Philadelphia had to face a tough front-seven this season—vs. San Francisco in Week 2 and at Carolina last weekend—Hurts rushed for a touchdown. Across those same two games, top Eagles running back Miles Sanders averaged 50 rushing yards and zero TDs. Well, Tampa Bay is the No. 1 rushing defense across the board this season—the Bucs have allowed just 229 total rushing yards (2.9 yards per tote) and one rushing TD over the course of five friggin’ games. Miles Sanders will not be finding paydirt, but I think Hurts will. He’s got too much willpower to be held out of the end zone, and urgency will dictate at least one goal-line sneak. In a tight game against a solid D, he’s like my daughter trying to get more blueberries—it’s not a matter of if it’s going to happen, it’s a matter of when.

Big surprise, everyone — Tom Brady leads the National Football League with 1,767 passing yards. He has also amassed 15 touchdowns and just two interceptions on the young season, but that’s neither here nor there. The GOAT has receivers aplenty, and his short-to-medium range accuracy looks about as good as it’s ever been. I’ll tell you, it’s not the avocado ice cream, because I tried it, and my overhand serve in rec-league volleyball still sucks. But that’s also neither here nor there. Here’s the truly important information: Brady averages a whopping 353.4 air yards per game this season. Don’t be deceived by the fact that Philadelphia has yet to allow a 300-yard passing performance this season—the Eagles have been so busy getting gashed on the ground (they rank 30th in the NFL in rushing yards allowed with 710), QBs haven’t needed to bomb it out. Well, Tom Brady needs to bomb it out. He’s on a warpath for his eighth championship ring and fourth MVP trophy. And Tampa doesn’t run—the Bucs have only had one game in which a back carried the ball more than 12 times. Sorry, Philly, you’re next on Brady’s victory tour—300 yards passing might be his floor.

We always knew that Philadelphia would prosper from reuniting ‘bama buddies Jalen Hurts and DeVonta Smith — we just weren’t quite sure how soon the results would come at the professional level. Well, Smith has two consecutive games with seven catches, and he’s caught 77.7 percent of Hurts’ passes in that span. Most importantly, he logged 199 receiving yards over those two weeks, and Tampa’s secondary has been God-awful. Like, sign former Brady enemy Richard Sherman amid off-the-field criminal charges level of awful. The Bucs rank dead-last in the NFL in passing yards surrendered, and Sherman just ain’t what he used to be (you mad, bro?). Smith is a lock to accrue at least 75 yards in this one.

My favorite new wrinkle in PointsBet’s Same Game Parlay is the ‘alternate totals’ and ‘pick your own spread’ props. It’s simple—you run through a plethora of different over/unders for game totals—or +/- spreads—and you pick which one(s) you like. Because I like to be safe with totals, as I’m sure you know by now, I’m going with OVER 47.5 points at -210. It may not offer the greatest value in the world, but it certainly does look like an easy green. As I mentioned before, both Philly and Tampa surrender 23-plus points per game, and Tampa games have gone under 50 points just once all season. This alternate total fits my prediction for this game—Buccaneers 28-24. That way, sportsbooks own the sheep who bet on the GOAT -7, and Vegas rejoices when the UNDER holds by a half-point. And, best of all, we win our six-legger and cruise into the weekend with some cold, hard cash.