Throughout the NFL season, this article will use ScoresAndOdds’ ParlayIQ tool to examine building same game parlays across various sports betting sites for primetime NFL matchups. We will examine stats, roster news, trends, player props and betting odds across sportsbooks to pick the most profitable combination of outcomes for primetime games. Now let’s build our Dolphins vs. Bengals same game parlay for Thursday Night Football. 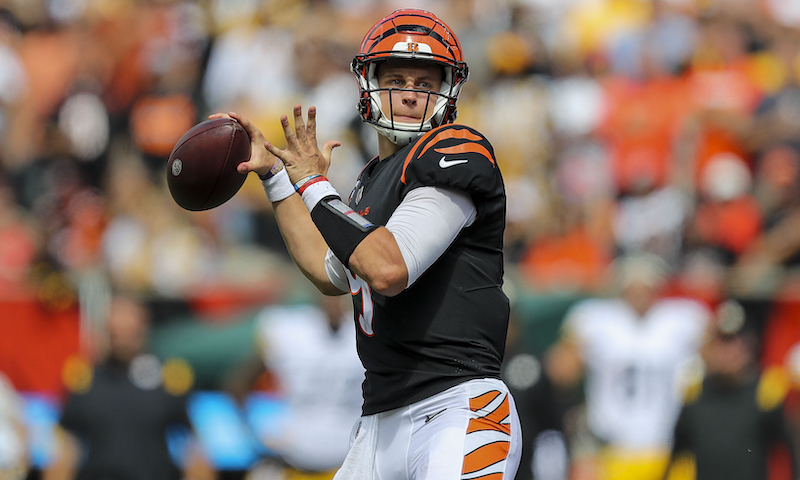 Happy Thursday, Grinders! Tonight, the NFL offers a step up from the normal Thursday Night Football class with the Miami Dolphins traveling to play the Cincinnati Bengals. Prior to the season, if anyone told you one of these teams would be 3-0, you would have believed it and assumed that the team was the Bengals. Instead, the Dolphins look to make it four in a row after two thrilling victories in consecutive weeks. Will the Dolphins make it four in a row? Let’s preview the game and make a same game parlay.

The Bengals are 3.5-point favorites at home this evening against Miami despite the Dolphins’ excellent start to the football season. The game total seems pretty lofty as well at 47.5 points, with FanDuel Sportsbook assigning a -106 price tag to the under.

The Bengals come into the game in relatively good health despite the loss of D.J. Reader in the Jets game. The Dolphins, contrarily, have a few key players on the injury report. Tua Tagovailoa, Jaylen Waddle, and Terron Armstead were all a bit nicked up last week but are expected to play in tonight’s contest. Keep your eyes glued to injury news leading up before making any final betting picks.

So, the Dolphins come into this game scoring copious amounts of points while the Bengals have struggled out of the gates. Joe Burrow and the offense are struggling to find the same high-flying offensive output that led the Bengals to the Super Bowl last season. The offensive line continues to be a concern for the Bengals. Meanwhile, the Dolphins cannot continue this offensive pace. Can they? The added speed on the Miami side of the ball is paying dividends for Tua — the Dolphins seem to be in each game because of the quick-strike ability of the speedy offense.

With all of that said, both teams play on a short week. The Bengals are not clicking and Miami is not this good. I think I want to tailor my same game parlay to a slower-paced game with a lower score. Let’s see what we can build.

While I played around with ParlayIQ and the under 47.5 points angle, the simulations didn’t seem to agree with the script I was trying to build. The simulations do not love the under in this game even if I do, so I am going to try and piece together an under script that the simulations seem to be on board with. The first leg, the Bengals team total.

As mentioned above, both teams are on short weeks and the Bengals are not clicking. The offensive line issues continue to plague the Bengals as any team seems capable of getting pressure on Joe Burrow. The Bengals have not established Joe Mixon on the ground in any game and this seems to be the appropriate time to do so. The running game will keep Burrow upright but also keep the clock moving.

Further, the Dolphins are playing at the third-slowest pace with regard to seconds per play (31.1). If the Bengals try to involve Mixon more (more on that momentarily) and the Dolphins take their time with the ball, we find ourselves with various scenarios where the Bengals struggle to get above this number.

So, back to Joe Mixon. Mixon was given 27 carries in the opening week of the season and continues to see that number shrink. In a victory versus the Jets last week, Mixon saw 12 carries for a measly 24 yards. Yuck.

Mixon has not had much room to run the football and the Bengals seem content to chuck the ball all over the place. Joe Burrow will not be able to sustain all of these sacks. Fortunately, the Dolphins seem like a great matchup to reassert the running game. The Dolphins are allowing 5.0 yards per rush attempt this season after finishing last season at 4.4 yards per attempt. This defense can give it up on the ground. The Bengals should look to take advantage and give Mixon the ball… a lot.

I think the Bengals at least open with a plan to get Mixon involved. This will help the clock tick down and correlate nicely with the previous leg.

Hayden Hurst is the fourth mouth to feed on the Bengals offense. With regard to target share, Hurst sits fourth in the Bengals’ offense, barely ahead of the aforementioned Joe Mixon. After receiving a ton of work in Week 1, Hurst only saw two targets against the Jets for one catch.

We aren’t really worried that Hurst is going go break a long one. He will need to get there on volume. If the Bengals are going under and Mixon is going to run the football, Hurst seems like a very likely overlooked piece of this offense. We will go under his receiving total.

Finally, we include our first touchdown leg this season. The simulations seem to love adding a touchdown into our same game parlays. Well, if I want to build a script that favors Joe Mixon seeing plenty of volume, I might as well incorporate a score.

Mixon has not found paydirt yet this season. This seems pretty strange for the bellcow back. I think he makes plenty of sense given the nature of Miami’s defense. Further, including a touchdown seems to help boost our odds given we already tacked on the under for the Bengals’ team total.

Joe Mixon… go have a day!

So, we fired these legs up into ParlayIQ to receive the following recommended price. 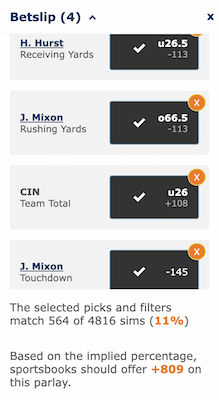 The simulations from ParlayIQ seem to think that an 8/1 tag is appropriate for this parlay. FanDuel, on the other hand, offers this price. 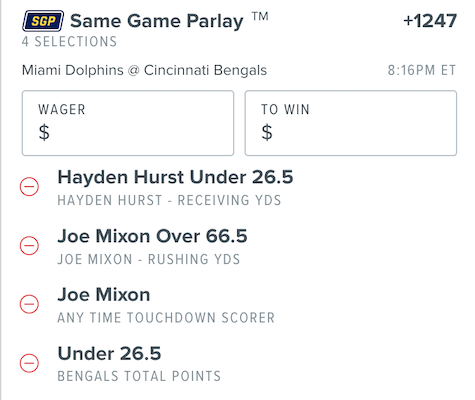 My assumption is that FanDuel loves that we want to bet a touchdown and a team’s under. The Bengals will score a touchdown, tonight. We will take the added boost… hopefully to the bank.