As summer approaches and the weather heats up, it means one thing: NFL season is getting closer by the minute.

While your season-long drafts are still months away, DRAFT has already announced the 2019 Best Ball Championship, and you’re not going to want to miss out on this!

With drafts already live in the lobby, their $3,500,000 Best Ball Championship is their biggest event yet. Ever. On Week 16, after surviving the regular season and besting the competition in the playoffs, the winner will walk away with $1,000,000!

Editor’s Note: Use promo code “GRINDERS” when you sign up for DRAFT!

Here’s how it works: Jump in now and join a 12-man draft. You’ll select 18 players. Once drafted, your team is set in stone. There are no trades. No waiver moves. No FAAB bidding. Nothing. Your top scoring players will automatically be your starters each week.

The DRAFT Regular Season will last 12 weeks, from Week 1 through Week 12. If you have the most points in your league through the 12-week regular season, your team will move onto the Playoffs to face the winners of other DRAFTS. After that, it’s playoff time where a ton of guaranteed money is up for grabs! 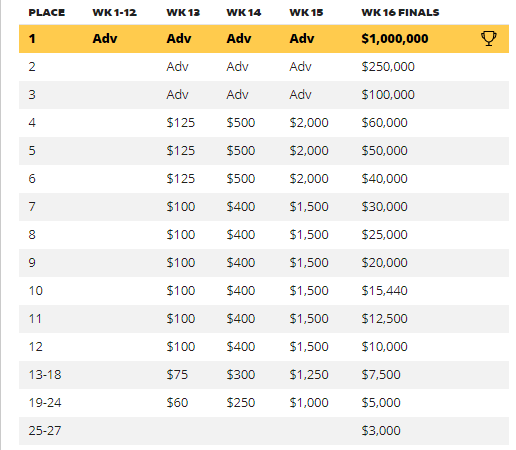 Drafts are live NOW in the DRAFT lobby. Get in early and often (Max 150 entries). Grab your favorite sleeper, rookie and/or bounce-back candidate now before the competition catches on!