Time has come for another Millionaire Maker tournament on DraftKings. The British Open marks the third time this golf season that DK has brought their signature DFS event to the world of fantasy golf. This time the tournament will be larger than their two predecessors, with a $3 million total payout and potentially over 171,000 lineups entered into this bad boy. There are plenty of guys like STLCardinals, Gibbathy & Notorious who are way more qualified than me to give out picks. What I’m here to do is dig into data from the two previous Millionaire Maker events and see if we can’t give you a few helpful pointers when you start filling out your rosters for this week’s tournament. I need to thank Nick St. Pierre (follow on Twitter @Nicks523) for helping me organize the data that will be presented within this column.

Editor’s Note: Haven’t heard? We’ve got DraftKings PGA incentives, which include full projections and expert picks from Notorious, as well as top plays from 2014 FSWA Golf Writer of the Year, Gibbathy! Find out more about our incentives offerings here!

Even though the total payout of this tournament has increased, the payout structure remains very top heavy, with over half of the entire prize pool paid out within the top three spots. Obviously we all want to be a millionaire come Sunday, but to achieve that it may take more than just building the top scoring lineup for the week. Just because you built the top scoring lineup, it hardly guarantees you get the million dollar prize. Confused? When a tournament like this reaches staggering prize pools with a relatively low buy in, you naturally will run into a situation where there will be massive lineup duplication. It is the nature of the beast, but something that is important you try to avoid. Why? The answer is easy…..who really wants to build a once in a lifetime lineup only to take home $8,196 (Editors Note: Technically higher b/c this doesn’t factor in all 122 price points)? The charts below show the number of duplicate lineups during the first two Millionaire Makers, and in both tournaments there was a roster duplicated 122 and 121 times by participants. 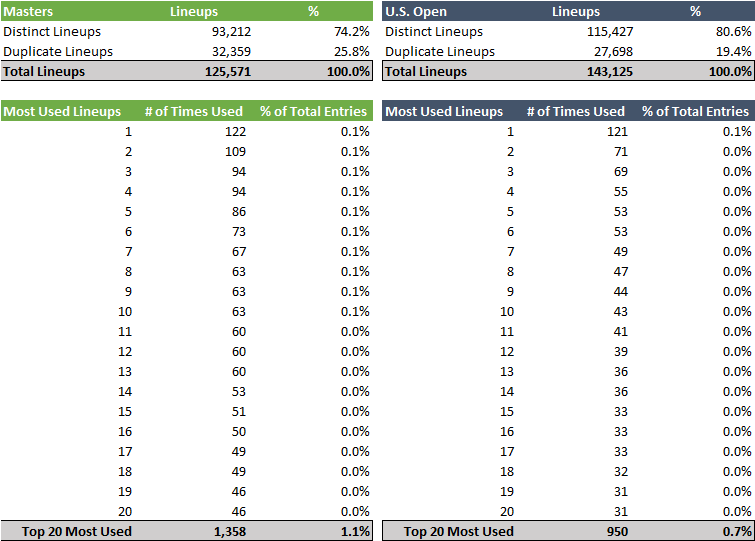 As you can see, there was a bit more overlap in the Masters than the U.S. Open. I would expect the British Open numbers to resemble the US Open, as the Masters has a much smaller field and also included a handful of “legacy” participants who really had no chance to win (or contribute to your fantasy lineups). Although I believe the increase in entries (assuming it fills) may yield a similar percentage, if the number of duplicates lineups increase, it will have you sharing that $1,000,000 top prize with even more people.

So now that we’ve discovered a situation we don’t really want to be a part of, the next question is how do we avoid it? Just as in most large field tournaments, it’s important you think outside the box and play against biases. Possibly the biggest bias for players new and old is to naturally want to use the entirety of your salary cap. As you can see below, this is the number one thing you want to avoid if you are trying to avoid lineup duplication.

The first thing that jumps out to me were the 1590 people who didn’t submit a lineup. Although staggering in size, it’s not that shocking considering DraftKings had been handing out promotional entries for the two months leading up to the U.S. Open. I would expect that to happen again, but to a much lesser extent this week. The most important takeaway is that almost 30% of lineups in the first two Millionaire Makers turned out to be duplicates when zero salary is left on the table. I think we can agree that is is a situation that is probably worth avoiding unless you want hold a million dollar check with 60-100 other people. To nobody’s surprise, the more money you “leave on that table”, the better chance you have at coming up with a distinct lineup. So the question now, is how do we weigh leaving money and potentially building less “talented” rosters versus using more of your salary to maximize the number of skillful golfers you roster?

I think it’s important to realize that golf (like most DFS sports) contains a fair amount of variance week to week. Just because one player has a higher salary, that doesn’t guarantee him to score more fantasy points their lower priced counterparts. We’ve seen relative no names (low salaried players if DFS was around) like Todd Hamilton and Ben Curtis win and other lower priced players like Tom Watson and Marc Leishman contend.

The other factor in this decision has to do with the number of lineups you are planning on submitting to the contest. In the chart below, you can see the breakdown of the amount of money people spent entering the first two Millionaire Makers. 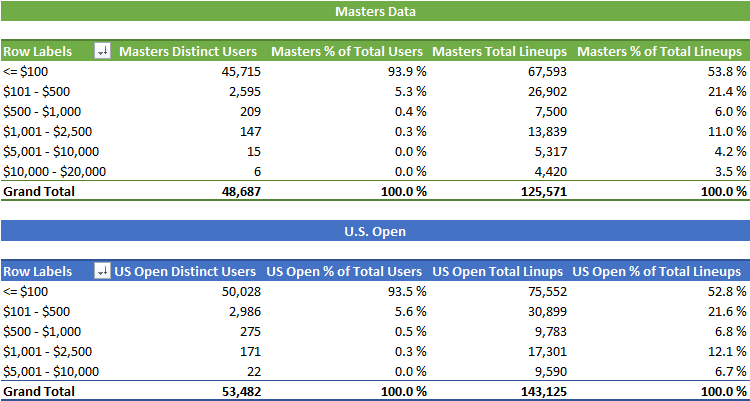 If you were to fall into the 50% of people entering five lineups or less, I’d be much more worried about avoiding lineup duplication than if I were to mass multi entry the event. With that said, don’t think you need a pile of entries to win this tournament. “Single Bullets” finished as the top lineups in each of the past two Millionaire Makers, and luckily for them neither had a duplicate lineup.