This same indicator could be applied to DFS to help visualize salary momentum, and better yet, to assist in determining undervalued/overvalued players in relation to their salary.

With an unusual Week 5 now in the books, it’s time to look to the Week 6 Fantasy RSI data to see where there may be some value on Sunday’s 11-game slate.

DraftKings Most Overvalued Week 6 Players Based on Fantasy RSI 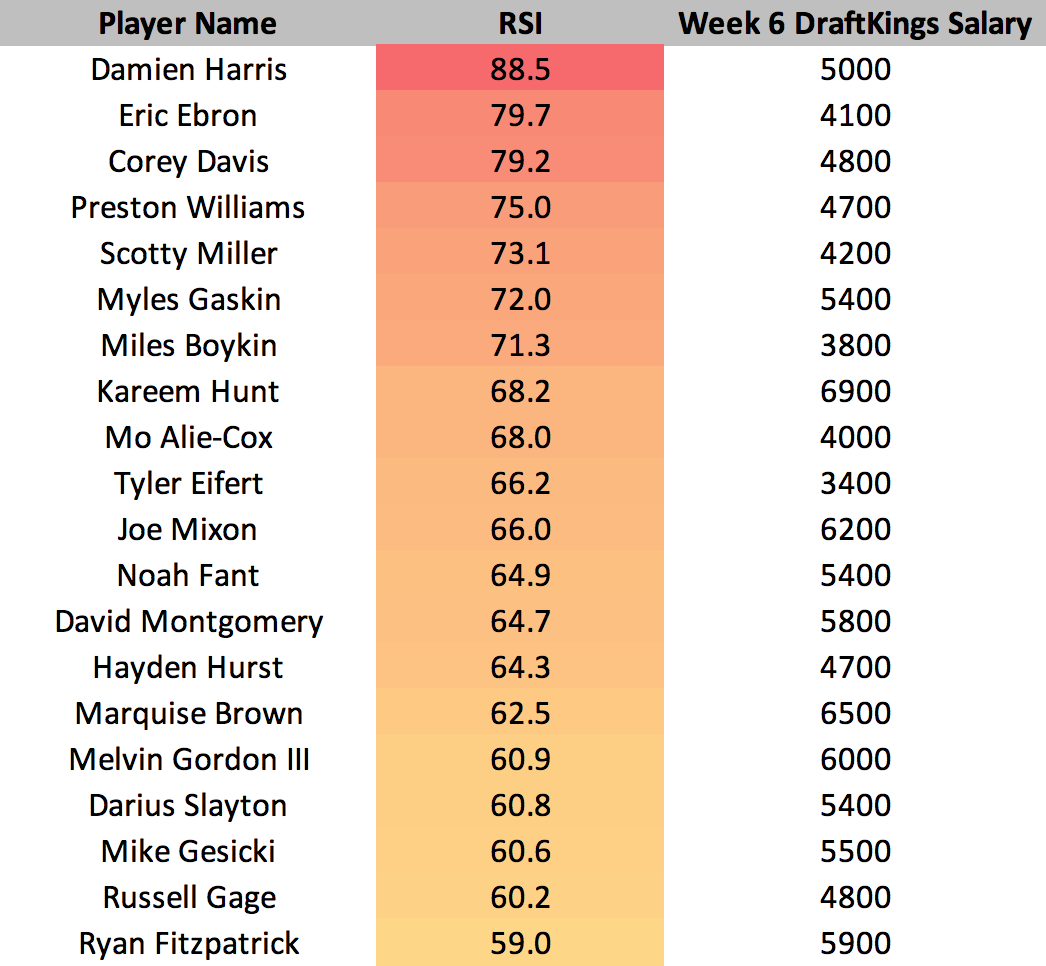 Sony Michel 2.0. With Michel now on injured reserve, Harris has taken over what is essentially the exact same role Michel has played over the last few seasons in New England. In Week 4, Harris played just 23 snaps and carried the ball an incredible 17 times, resulting in a $900 salary increase this season. Just like Michel, Harris is virtually unplayable in games where the Pats will face negative game script, but a solid option if New England is in the lead. If Cam Newton can suit up for this week’s matchup against Denver, Harris is a reasonable play at his salary. However, no Cam means Harris will have a hard time hitting value if NE gets down early.

This Indy TE situation could not be any worse for fantasy purposes. With Trey Burton and Jack Doyle both healthy and in the mix, Alie-Cox simply isn’t seeing the usage or volume needed to be fantasy relevant, especially at $4,000. In Week 5, Burton saw a 44% snap share and 6 targets, Doyle a 61% snap share and 2 targets compared to just a 37.5% snap share and 1 target for Alie-Cox. Unless Doyle or Burton gets injured, Alie-Cox has lost any fantasy value we thought he had a few weeks ago.

This is the 2nd-most expensive Williams has been in 2020 after his 4-106-1 line in Miami’s surprising rout of San Fransico. Despite the strong performance, I have major concerns about Williams’ consistency going forward given his current role in the offense. The former CSU Ram is 5th in team targets, behind both Isaiah Ford and Miles Gaskin. With Miami as an 8-point favorite in Week 6 against the league-worst Jets, the Dolphins passing volume will surely decline from what we saw in Week 5. Williams’ redeeming quality is his team-leading 15.7 average depth of target (ADoT), but high ADoT players like Williams tend to be very boom or bust, and I wouldn’t bank on a boom performance in Week 6.

This is a career-high salary for Brown, who is leading Baltimore in nearly every receiving category ahead of their Week 6 game against Philadelphia. Brown is certainly a game-changing deep-threat, but Lamar Jackson has struggled to accurately deliver downfield throws thus far, as only 4/15 of Brown’s 20+ yard targets have been deemed catchable. Of the QBs who have attempted at least 20 deep throws, Lamar’s 72.7 passer rating ranks 12th, ahead of only Joe Burrow and Nick Foles. With the Ravens only throwing 51% of the time, Brown is overpriced this week as the main slate’s 9th-most expensive WR.

DraftKings Most Undervalued Week 6 Players Based on Fantasy RSI 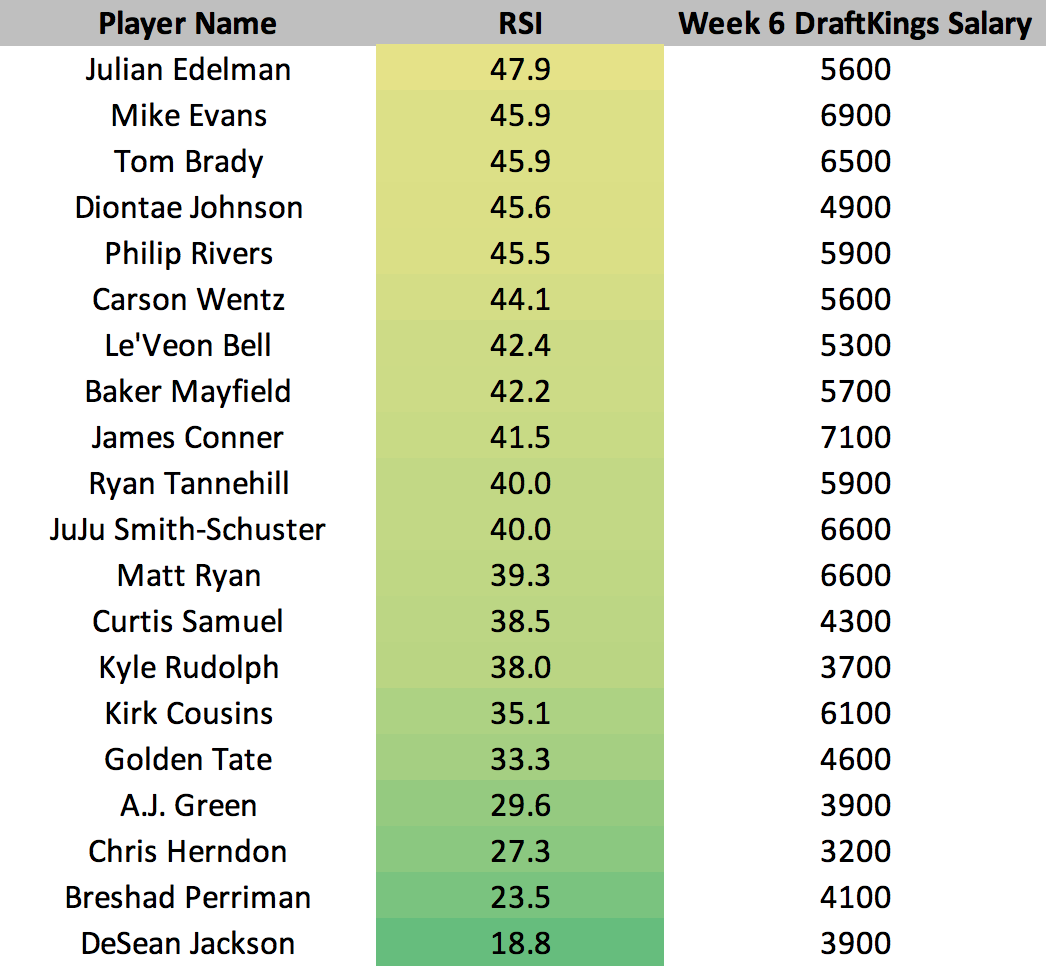 Facing Atlanta’s defense is a dream matchup for any team, and as the Vikings’ offense gets back on track, this is an excellent spot for Cousins. With the Falcons’ giving up 446 yards per game and a game total of 55, the Vikings are going to be all but forced to put the ball in the air. The emergence of Justin Jefferson has been a huge boost for Cousins, who has averaged 0.55 fantasy points per dropback in weeks 3-5, compared to just 0.37 in weeks 1 and 2. Cousins has also historically outperformed in high total games, averaging 22.1 DraftKings points in games with an over/under greater than 50. Opposing QBs have posted tournament-winning performances against Atlanta nearly every week, averaging a humiliating 30.5 DK points through 5 weeks. If there was ever a week to roster Cousins, it’s this one.

With everyone scrambling to grab Chase Claypool off waivers after his monster Week 5 performance, Johnson seems to be completely forgotten in the fantasy football world right now. Johnson was a non-factor in Week 5 due to a back injury that he suffered early in the game, and will likely be listed as questionable ahead of Week 6. Assuming he can play, this is a premier buy-low opportunity on the 2nd-year WR. Johnson ranks 1st or 2nd on the team in targets, expected fantasy points, yards per route, and avoided tackles on receptions. With a matchup against the soft Cleveland Browns secondary on the horizon, Johnson could easily join the long list of players who have already scorched safety Andrew Sendejo and Co.

The Eagles QB turned in his first decent game of the season in Week 5, and has quietly averaged 21.8 DraftKings points over the last 3 games. There are certainly plenty of holes in this Eagles offense, but with Wentz returning to form he is certainly back into fantasy relevancy. Facing the Ravens as 8-point underdogs will force the ball into Wentz’s hands, who has historically averaged 23 DraftKings points as a touchdown underdog. He’s far from the slate’s top QB, but he’s worth a shot in tournaments for those making multiple lineups.

Breshad Perriman, Chris Herndon, and Le’Veon Bell all show up as fantasy RSI values this week, demonstrating the limitations of raw salary analysis. Unfortunately, I can’t recommend buying into the Jets unless Sam Darnold manages to suit up for their Week 6 game against Miami. All three of these players have fallen victim to the Jets historically bad offense, which has only scored 6 TDs in 5 weeks and managed to lose every game by multiple scores. If Darnold can go, there is actually a glimmer of hope for these three, but at this point in the season, NYJ players can only be rostered as large-field tournament fliers after a deep breath and a glass of whiskey.