This same indicator could be applied to DFS to help visualize salary momentum, and better yet, to assist in determining undervalued/overvalued players in relation to their salary.

We’ve made some important changes this week, as this is the first week of the season where our RSI numbers will reflect only 2020 salary data. With this in mind, let’s dive into the RSI numbers to see where the value is in Week 8 of the NFL season. 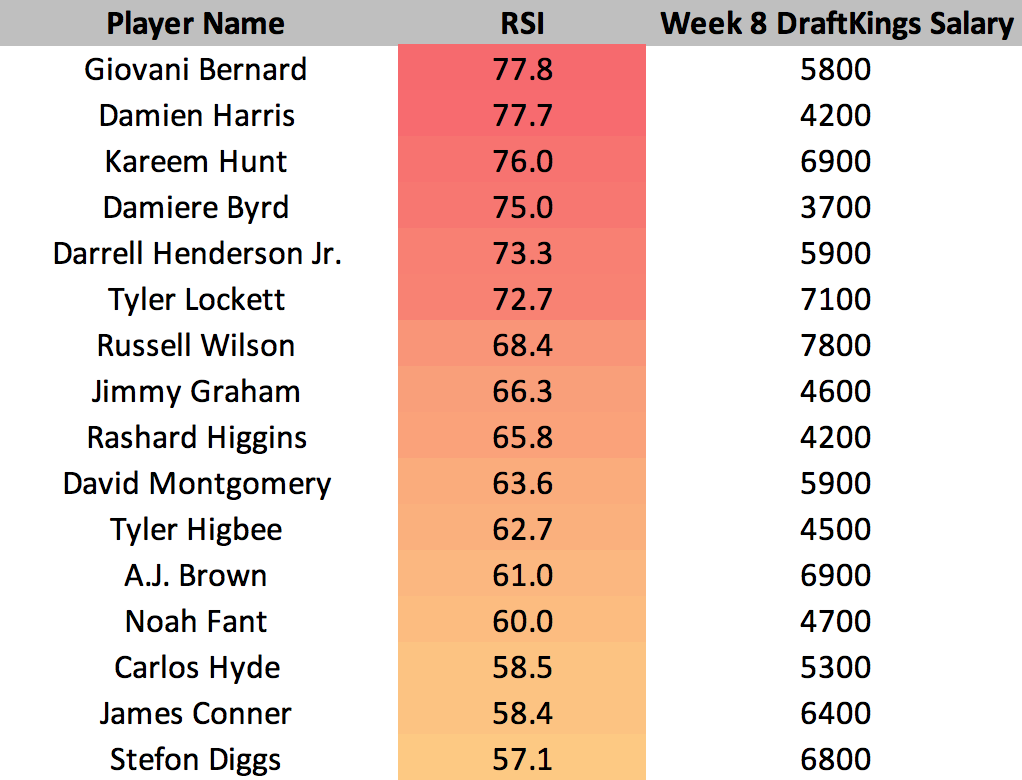 This is the 2nd time this season Hunt has been $6900, and it’s no surprise given his dominant snap and touch shares since Nick Chubb was injured. With Chubb out again for Cleveland’s Week 8 game against the Las Vegas Raiders, it’s difficult to determine exactly how good of a matchup this is for Hunt.

On the season, the Raiders have allowed the 2nd-most fantasy points to opposing RBs, but just the 2nd-fewest fantasy points to RBs in Weeks 5+6 against CEH and RoJo. In the three games Nick Chubb has missed, Hunt has only ranked 15th among RBs in expected fantasy points per game, and 22nd in actual fantasy points. While the high-total matchup against Vegas is certainly juicy from a fantasy perspective, the underachievement we’ve seen from Hunt as Cleveland’s lead back should give fantasy players some pause before rostering him in Week 8.

Graham’s salary has been all over the map this season, but it’s still $800 higher than the beginning of the year. The veteran TE is 11th at the position in targets, but t-43rd in yards after the catch per reception due to his lack of mobility with the ball in his hands. Outside of a multi-touchdown game, Graham has little chance to post a tournament winning performance of 20+ points, which is a major red flag at his price point.

Similar situations here in that neither player is viable unless their team’s respective starter misses Week 8. With both Chris Carson and Joe Mixon questionable, the massive salary increases each player has seen may not be enough if they have control over the starting role. On Sunday, Bernard saw 75% of the Bengals’ snaps and 18 total touches, and we should expect similar volume for him this week against Tennessee if Mixon is out yet again. Chris Carson left the first half of Sunday night’s game with a foot injury, leading to 18 total touches for Carlos Hyde. Just like Gio, Carson being out in Week 8 makes Hyde an instant RB2 thanks to the 15-20 touches we can expect from him in one of the NFL’s top offenses.

Fant was a non-factor in his first game back from a knee injury, scoring just 6.8 DraftKings points despite playing 70% of the snaps in a pass-friendly game script. Fant ranks 7th among TEs in expected fantasy points per game and is clearly a crucial aspect of the DEN offense, but a tough matchup this week against the Chargers should prevent his first double-digit fantasy game since Week 2. LAC has allowed just 26 receptions to TEs (9th fewest) despite facing two teams (KC+TB) who have targeted their TEs at a top-5 rate this year. When combined with the atrocious play of QB Drew Lock, whose 63.3 passer rating ranks dead last among starting QBs, Fant is a pretty clear fade in Week 8. 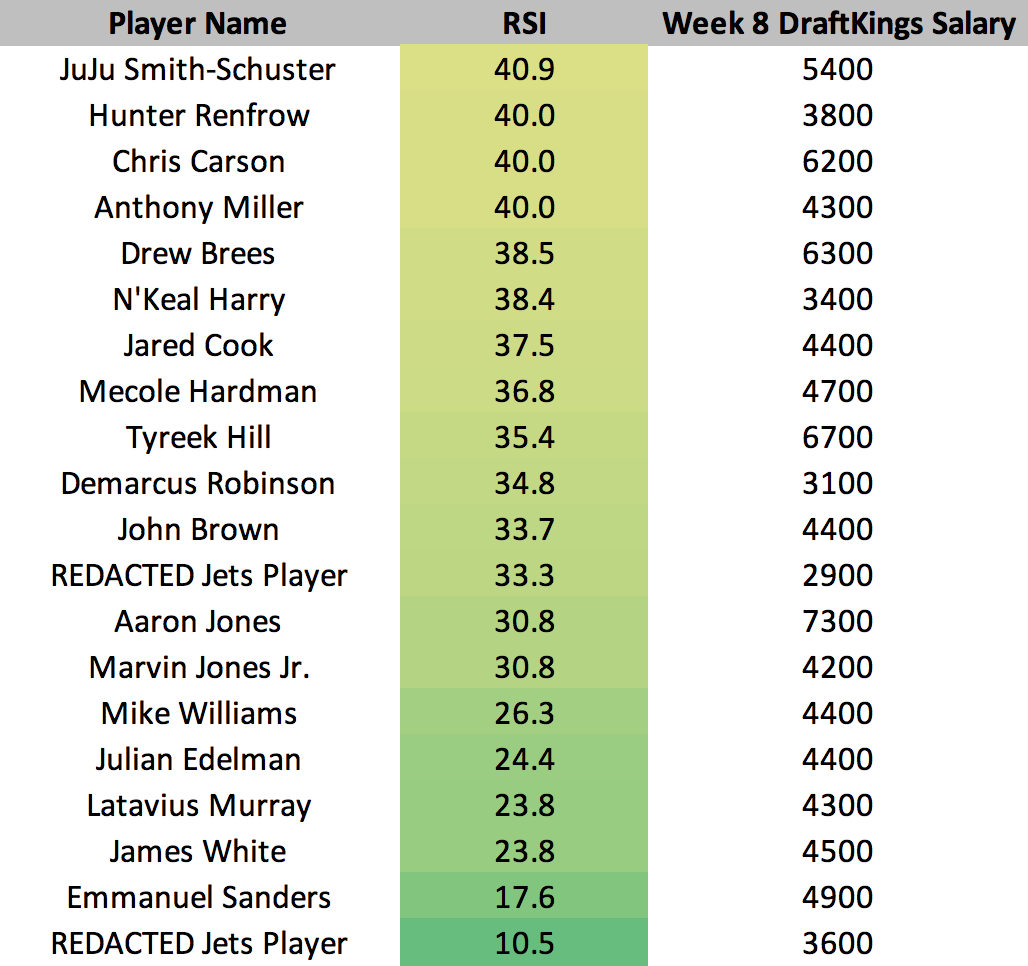 There is simply no hope for this offense. The Jets are last in the NFL in yards per game, yards per play, points per game, point differential, team PFF grade, and of course, record. At this point in the year, Jets players can be safely discarded to the ‘do not play under an circumstances’ column.

One of the most frequent players to show up on the Fantasy RSI undervalued list has an absurd $4400 salary in Week 8, which represents a $1600 decrease on the season. The veteran WR hasn’t been this cheap since at least 2013, as I can’t even find salary data going back any further. New England’s leader in virtually every receiving category, Edelman is a borderline must-play this week at a career-low salary. Facing a BUF defense that’s been surprisingly mediocre on the year, you really couldn’t dream of a better buy-low spot for Edelman, who likely won’t garner the ownership he should at this salary given the recent poor play of QB Cam Newton.

Jones played more snaps than any other Lions receiver on Sunday but only caught 2 of his 5 targets for just 8 total receiving yards. While the Week 8 matchup against Indianapolis is far from ideal, the current over/under of 50 suggests an above-average scoring environment. With the Lions as 2.5-point underdogs, Detriot could easily be forced into a pass-friendly game script, allowing Jones a great opportunity to exceed the 5 targets he has averaged per game this season.

This is a ridiculous price for a player with a ceiling as high as Tyreek Hill. As the #1 receiver on the most explosive offense in football, Hill is an ideal tournament play in what should be a shootout against the Rams. Offering a very strong 14.6 average depth of target (ADoT) shows off what we already knew about Hill: he’s a threat to score on every play. Combined with the team-leading 15 red-zone targets he’s seen this season, Hill has all the indicators of a player who is quickly headed towards a 40-point outing.

Assuming Jones is back in Week 8, he will have an elite opportunity as a 7-point favorite against a Vikings defense that’s allowed 127 rushing yards per game. Outside of Green Bay’s disastrous loss to Tampa Bay, Jones has seen at least 18 touches in every game he’s played this season. On a per-game basis, Jones is 4th among RBs in expected fantasy points per game, 9th in yards after contact, and t-4th in fantasy points per touch. With a positive game script inbound against Minnesota, he’s a premier tournament play in Week 8.