How to Use the New MLB DFS Team Smash% Tool

Winning an MLB DFS tournament on DraftKings, FanDuel, and Yahoo demands that you think about more than just which team is likely to score the most fantasy points on a given slate.

While it is still very important to consider the projections, you must also consider the projected ownership of your team stack and understand the relative advantage that can be gained on your opponents if your stack succeeds. Baseball has a significant variance associated with each plate appearance for a batter, and the volatility can lead to confidence that is either too high or too low compared to a team stack’s theoretical probability of success.

In order to better visualize this probability conundrum that exists, we are excited to introduce the MLB DFS Team Smash Percentage Tool. 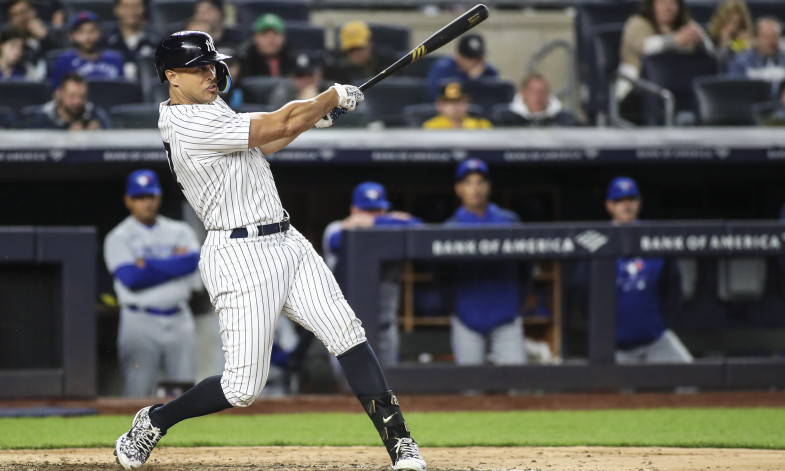 Using our daily PlateIQ MLB player projections, we execute a simulation of fantasy points scored for each batter on the slate. Each “trial” of fantasy points scored represents a simulated slate, and we repeat that process at least 10,000 times to create the Team Smash percentage. The top 7 batters for each team are considered, as well as the associated ownership for those hitters. Once we have completed all 10K + trials, we determine who scored the most fantasy points in each simulated slates and tabulate the percentage of times each team finished with the highest output. We also use today’s player salaries on each fantasy site to determine the best points per salary stack.

The resulting metrics are:

— Team Smash %: Percentage of top finishes for a team stack in the 10,000+ simulations.

— Ownership Percentage: The mean ownership of the top 7 batters, scaled relative to the sum of all batters sampled.

— Leverage: A visualization of the potential advantage to be gained on your opponents if your team stack succeeds.

— Top Value %: Percentage of top points per salary finishes for a stack in the 10,000+ simulations.

How to Use this Tool to Build Daily Fantasy Baseball Lineups

Beyond that, this frequency can be combined with our daily projected ownership to help you balance the need to choose high probability/highly projected teams with the need to build lineups that give you a relative advantage on your opponents.

On this day, you can see the simulation produced these six teams as the best stacks for the day. The Indians, Red Sox, and Padres were the highest probability teams to produce the most fantasy points in any given trial. The Yankees, Orioles, and Twins were less probable but also expected to be less owned than the top three. How you might use the information in the Team Smash% tool will vary by contest type and the number of entries you’ll enter. In general:

— In smaller fields and limited entry contests, gravitating towards high percentage teams and carefully differentiating based on potential leverage may be enough to defeat the smaller number of lineup combinations.

— In larger fields with multiple entries, it may be necessary to spread your exposure down to the lower probability and ownership tiers to achieve proper diversification.

So how did things actually play out on April 11th? Well, if you had selected the Red Sox and the Twins as your two stacks in combination… you could have built a team that was both high probability (Red Sox) with relative differentiation (Twins) to create a winning formula for the slate.

Constructing the winning lineup using the LineupHQ optimizer still requires your skill and ability, but using the Team Smash Percentage Tool can help you visualize one of the more important problems to solve when determining how to allocate your team exposure.

Where to Find the MLB DFS Stacking Tools for DraftKings, FanDuel, and Yahoo

You can find the DraftKings Team Smash Tool in the “Premium Content” hub located in the MLB menu daily.

The “Stack Leverage” section integrated in LineupHQ also contains up-to-date outputs from the Team Smash tool upon each page refresh. You can find information in the player pool, and also in the “Stacks” section. 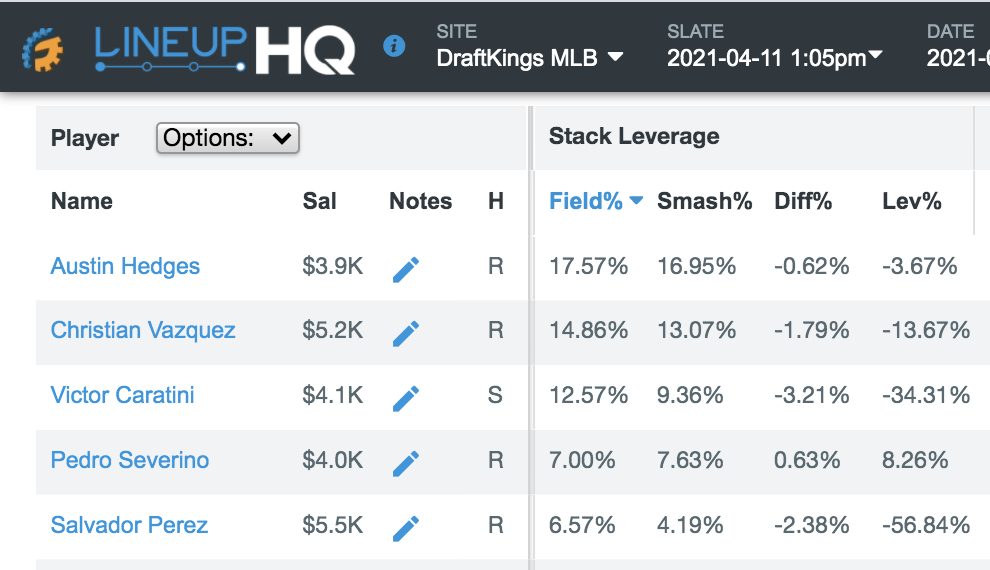 — Find balance in your choices. Seek to build teams that sacrifice some probability of success in exchange for relative advantage over your opponents.

— Know the game type, field size, and proper strategy associated with the contest you have entered. Alex Sonty had some useful thoughts on game selection here.

— Understand that projected ownership aims to gauge the ownership in the large and very popular lower stakes GPPs. Ownership will fluctuate (sometimes at extremes) depending on the game type selected. You’ll want to factor that in when viewing the Team Smash Tool.

— Information and lineups change leading up to lock. The best and most realistic viewpoint of this tool will come within the last hour before lock.

— The top stack and top value are based on RotoGrinders PlateIQ projections and their associated event probabilities. Team ownership estimates are per RotoGrinders projected ownership tool. Understand that the DFS tools provided on RotoGrinders represent our confident and accurate forecast. Also understand that you can and should use your own judgement when you hold well-reasoned conviction. Apply that conviction carefully when analyzing the Team Smash percentage tool.

This DFS content is a part of our Premium Content Schedule and designed to help you build better lineups on DraftKings, FanDuel, Yahoo!, SuperDraft, and other daily fantasy contest providers. Access MLB Projections, Expert Rankings, Projected Ownership, MLB DFS Picks, and other Data Tools using this content hub. For our world-class optimizer that offers a suite of tools and information designed to help you crush the competition, please head to LineupHQ!