DFS baseball is unique from every other daily fantasy sport in that it’s all about individual matchups. A pitcher goes head to head against each hitter one by one, making each individual matchup just as important as the next.

Several months ago, the team here at RotoGrinders set out to create a tool that could bring together all of the relevant data about each of these matchups into one place, while also creating some new insight that you couldn’t find anywhere else. Hence, PlateIQ was born.

PlateIQ is a FREE, all-in-one dashboard that provides all of the relevant data about a particular matchup. You simply select a game from today’s slate, and it will automatically select the starting pitcher for that game and display his stats against each hitter he is expected to face.

All of the basics that you expect can be found in the main hitter table at the top of the page: 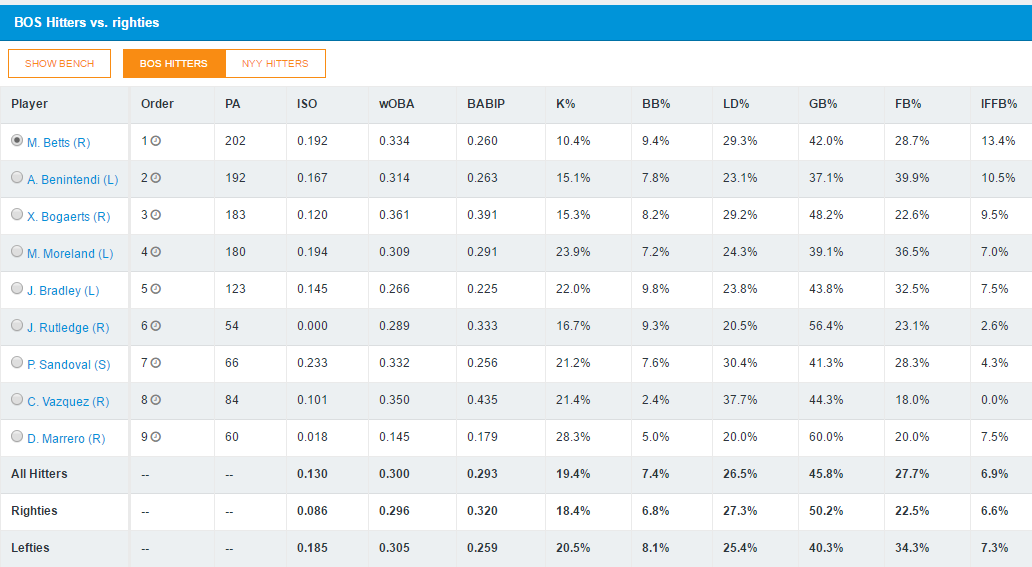 Here you will find everything from ISO to wOBA to batted ball rates; Essentially every stat that we find important in a hitter’s matchup. If you see a clock icon next to their batting order, it means they are in our projected starting lineup, and if they have a green check, it means they have been confirmed.

In addition to each individual’s stats, we also have aggregate data at the bottom of the table, and this is where this section really shines. Sure, you can find “Boston K rate against righties” in a lot of places, but this is the only place where you’ll find today’s starting lineup’s K rate against righties! We average every hitter’s data, excluding players with very small sample sizes, to avoid outliers skewing the data. This is a great way to get a quick glance at the overall matchup and what you can expect from the team against today’s starting pitcher.

In addition to individual hitter data, you will find relevant statistics for the pitcher in the table at the top right of the page. Simple data for lefty/righty splits gives you a quick glance of how effective today’s starter is against each handedness. We will constantly be adding more to this table, but these are a great place to get started. Heck, you can even choose a different pitcher from the drop down if you wanted to research for a future slate! 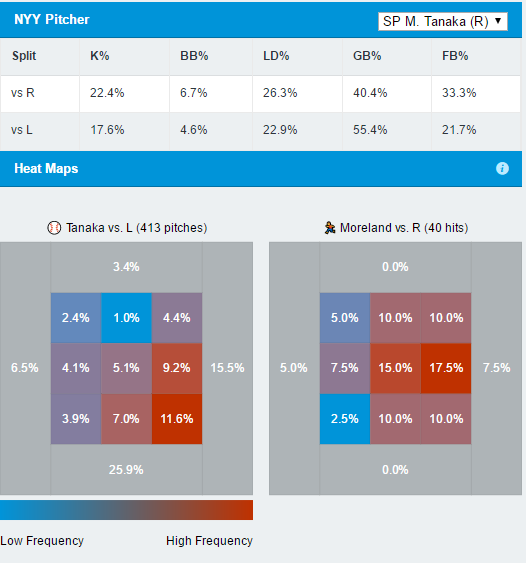 The Heat Maps chart is where things really start to get fun.

We’ve broken the location of each pitch down into different zones; The main nine zones are strikes, and the four grey outside zones are balls. Using these zones, we’ve mapped out two things:

— How often the pitcher throws a pitch in each zone, and
— How often a hitter gets a hit in each of those zones.

In the above example, we see that Tanaka throws pretty often to the right side of the zone against lefties, while Mitch Moreland gets 27.5% of his hits from pitches in the bottom right and middle right zone. While this obviously doesn’t guarantee success, it’s yet another indicator that you can add to your research if you’re unsure on a particular hitter.

At the moment, you can compare the heat maps for any individual hitter, but in a future update, you’ll also be able to look at the aggregate data for all righties, lefties, or the entire lineup against today’s starting pitcher.

This is where things get a little crazy and, in my opinion, very cool. We wanted to come up with a way to take the data we have on individual pitch types to determine A) How successful a hitter is vs certain types of pitches, and B) How often the pitcher he’s facing actually throws that type of pitch. This tool went through a number of iterations, and will continue to evolve over time, but there is still plenty you can garner from its current form.

OK so this one looks a little intimidating, but let me explain.

The charts on the left hand side are called “spider charts”, and they’re used to display this type of frequency data for multiple data points all at once. Let’s start with the pitcher side:

In the above example, you can see two lines on the pitcher spider chart. Each “spoke” of the chart represents a pitch type (CH = changeup, SP = splitter, CT = Cutter, etc) and the grey line is the normalized league average frequency of that pitch type. We decided to normalize the league average because some pitches are thrown so frequently (or infrequently, in the case of something like a knuckle ball), that it made the chart difficult to read.

The blue line in the chart represents, in this case, the frequency at which Tanaka throws certain pitch types. So in this example, Tanaka throws many more splitters than the league average, as well as an above average amount of sliders, sinkers, and cutters.

With this in mind, we can now look at the hitter chart to see if we can find anything to indicate success against those pitches. The goal for good hitting matchup is to have the hitter’s chart show spikes on the same pitch types that the pitcher is showing. This would indicate that the hitter records a large number of hits against that pitch type, which is obviously a good thing if he’s going to see a bunch of those pitches today.

So in this example, Moreland gets a higher than league average amount of hits from curve balls, cutters, change ups, and splitters, but struggles against sliders, and has some difficulty with sinkers.This leads to an interesting situation, because we already saw that Tanaka throws a ton of splitters (which Moreland is successful against), but also a fair amount of sliders and sinkers (which Moreland struggles with). At the end of the day you’ll have to decide how you believe that effects the matchup, but it’s one more data point to help you make that final decision about rostering a player.

PlateIQ was designed to present all of the most important data about an individual matchup in one, easy to use place. Our goal was to aggregate things you would normally need to search multiple places for, while also adding some new features that focus on daily fantasy implications that you can’t find anywhere else. I’m extremely excited about what we came up with, and I hope you are too! So dig in, play around with the data, and go win some GPPs!

After you’ve had some time to play around with it, let us know what you think! Are there certain stats that you’d like to see added? Features that you’re interested in? Let us know in the comments below, because this tool will also be constantly evolving over time, and we’d love to hear what you want us to add first.