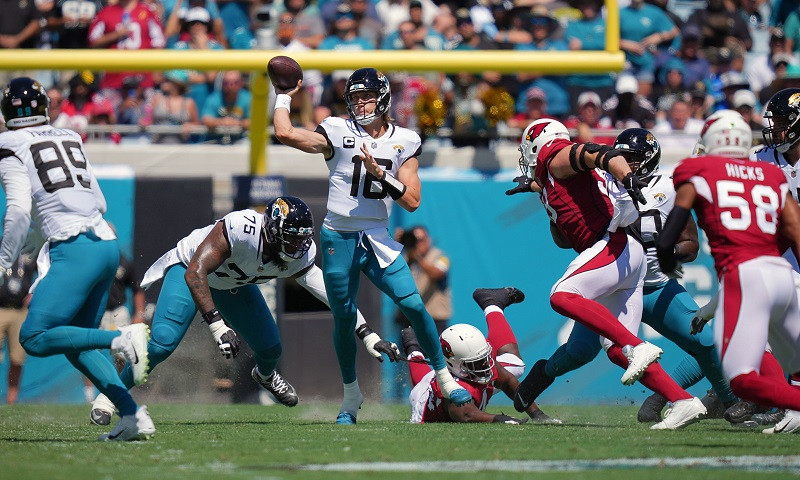 The Urban Meyer era in Jacksonville was one of the biggest train-wreck experiments we’ve ever seen at the NFL level. The organizational arrow can only point upward for the Jaguars in 2022. New head coach Doug Pederson has historically worked well with quarterbacks and his presence will be a huge part in playing the trajectory of Trevor Lawrence’s young career.

Using RotoGrinders NFL 2022 projections, we review all 32 NFL Teams this summer and uncover all the best bets and league-winning picks we can find. Among the questions we will look at to answer in this article:

- Jacksonville Jaguars Betting Odds: Will there be team chemistry to eclipse that 6.5 current team-win total on the betting board?

- Team Matchup Overview: Are there any wide receivers capable of becoming a true No. 1 option? 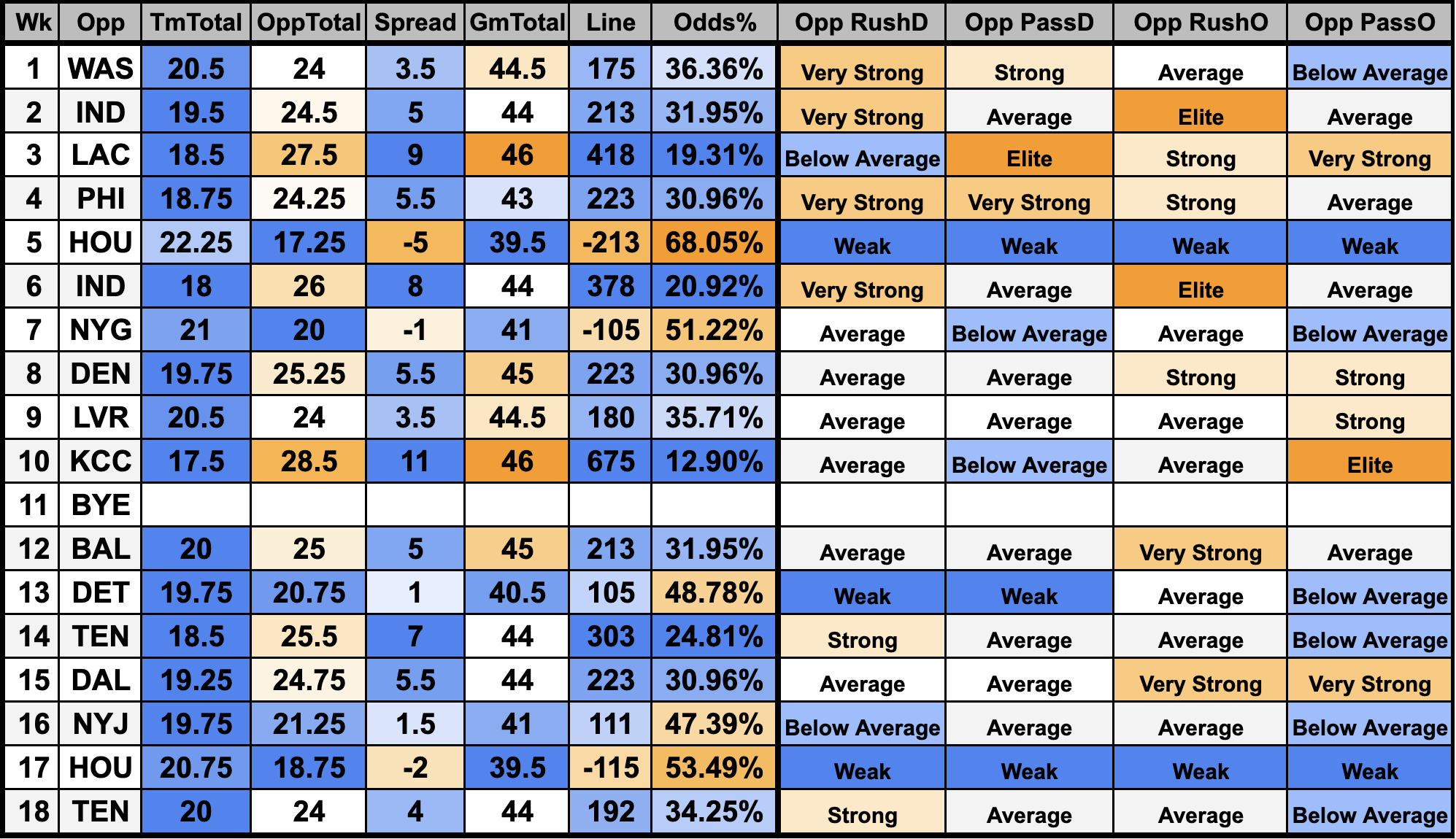 The Jaguars are only favored in three games, despite the Vegas win-total line of 6.5 offered across the sports betting industry. At first glance, I worry about them keeping pace with the AFC West teams on the schedule. However, they are dogs of a touchdown or less in 10 games on the schedule.

There are so many moving parts on this offense. Two running backs (who are very talented) coming off season-ending injuries, an entire new offensive scheme and a collection of receivers who are all No. 2’s at best.

Best Bet – Team Total Under 6.5 Wins: I don’t like the hook on this number. The Jaguars are projected to be in many close games, but are currently only projected to score three touchdowns in ONE game on their entire schedule. I don’t think there’s enough firepower to hit seven wins, but I do think six is possible. Our odds currently calculate a greater than 50% chance to win just three games on the docket.

PrizePicks is a DFS site where you can use your fantasy knowledge to make prop picks and win cash. It’s also perfect if you love player props but aren’t in a state with legal sports betting. Use the PrizePicks promo code GRINDERS to get a $100 bonus when you sign up!

Favorite Prop: Trevor Lawrence Under 14.5 Interceptions This Season – The cards couldn’t have been stacked more against Lawrence in 2021 with Meyer’s ineptness to coach or incorporate any type of positive team environment. Pederson will finally provide some stability to a quarterback who was one of the highest-touted prospects over the last decade. Last year, Lawrence threw 17, but had a few disastrous games that I don’t think will happen as often with a new offensive structure in place.

More importantly, there should be far less true garbage time for Lawrence to make any egregious errors when the clock winds down in the fourth quarter. The game scripts should be far less terrifying, as 10 of the Jags’ games as dogs are within a touchdown. It won’t be a surprise to see a strong dose of this “thunder-and-lightning” ground-game approach between Robinson and Etienne to try and eat clock and keep games competitive.

Lawrence threw the ball 600+ times last season, good for seventh most in the NFL due to terrible game scripts. We shouldn’t see a number that high this year.

None of this really changes my thoughts from a betting perspective.

But from a fantasy perspective, it’s not an overwhelming gauntlet of a defensive schedule. Yes, the AFC West can score points, but outside of the Broncos, none of those defensive units blow me away. Anytime Houston is on your schedule twice, it’s another opportunity for a skill player to have a ceiling game.

Having five “soft” rush defenses and six neutral games on the schedule makes me have some fairly significant interest in James Robinson late in annual season-long drafts based on his current ADP.

As far as receivers and tight ends go, the WR room is crowded, and there probably won’t be enough volume distributed to anyone specifically to become a WR 2 on anyone’s roster. Christian Kirk has the opportunity to be a WR 3, with WR 1 upside some weeks. Evan Engram could also prove to be a bye-week replacement. 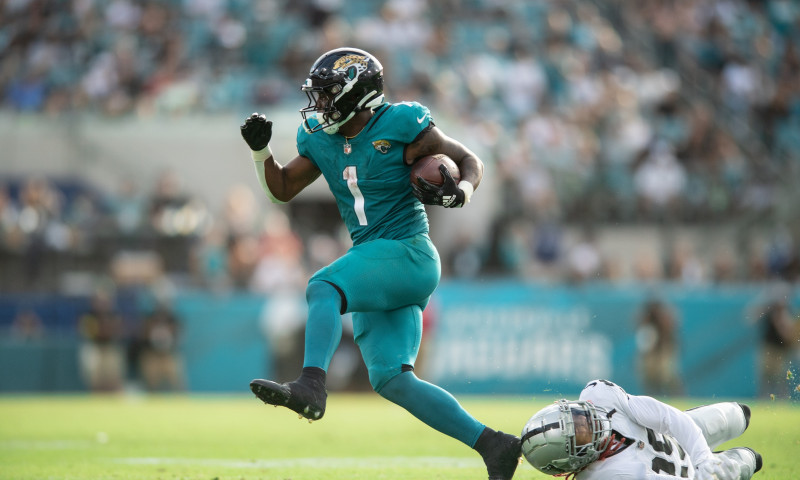 Robinson and Etienne Jr. are projected to be the main players at the running-back position, but are both coming off significant season-ending injuries. Based on value and average draft position alone, I’ll be heavily investing in Robinson.

According to the current NFC ADP reports, Etienne is at 39.11, while Robinson is at 135.40. I’m not sold on Etienne being a consistent early-down back and I think he’ll also see some slot-work and some gadget-y type opportunities. He certainly owns more value in PPR formats.

However, the red-zone guy will be Robinson – if he’s healthy – and he appears to be trending in the right direction. The guy going in the 11th round of most drafts has proven he can burden a decent workload and still found ways to produce in a terrible system, under a terrible coach within terrible game scripts last season. He also improved vastly as a pass catcher. Anything can happen, but Robinson is certainly worth much more than a stab late in drafts, while if he’s healthy, would make Etienne much less appealing at his ADP.

I’m pumping the brakes on going out of my way for any of these receivers on a team which doesn’t have any team totals (in any game) projected at more than 21. Christian Kirk, Marvin Jones Jr., Zay Jones and Laviska Shenault. OK – what’s your point, Luuch? There just a bunch of “guys” and there are way too many of them. Lawrence isn’t going to pepper any one of them with 8-10 targets consistently.

While the volume won’t be there, they’ll be in some DFS milly-winning lineups this season as game-stack runbacks. Kirk remains the most appealing fantasy asset amongst this group, but the floors are far too scary from week-to-week to make anyone a priority.