If you’ve ever been to a DFS Live Final, you’ve most likely had the pleasure of meeting our very own John Breslin, AKA squirrelpatrol. John has been a dominant force in the DFS world for many years, currently sitting 29th in the RotoGrinders Rankings.

After this weekend, his legend has grown yet again. 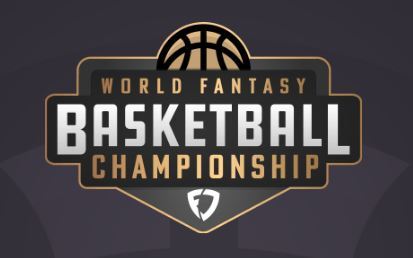 With COVID still restricting public events, FanDuel called an audible on their traditional live final for the NBA season, opting for the 2021 version to be the first “Virtual Finals Experience”. 100 qualifying seats were up for grabs throughout the season, with the Live Final totaling a $2M prize pool and a $500K prize to the champion. The Virtual Finals experience came complete with Q&A sessions with NBA royalty, FanDuel swag, and access to the Virtual Championship Watch Party.

Well, as the NBA season rolled on, John did as we’d all expect at this point, taking down FOUR qualifiers to grab his four shots at the Championship…. and he certainly made the most of them on Saturday evening. When all was said and done on Saturday night, John not only was crowned the 2021 FanDuel WFBBC Champion, but he also managed to finish in second place as well! His winning lineup (pictured below) racked up a whopping 415.2 FanDuel points. 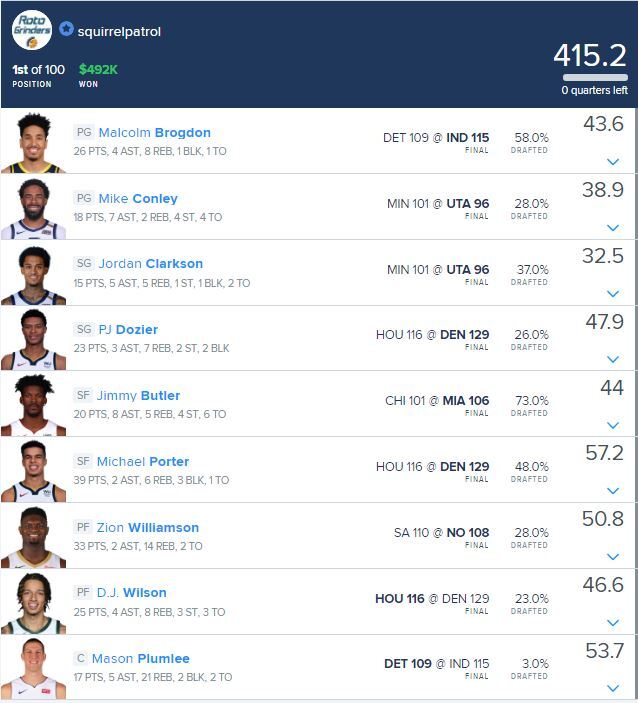 Many users would be tempted to use their four entries to expand their player pool a bit, but John kept his core tight. He locked both Jimmy Butler (44 FDP) and D.J. Wilson (46.6 FDP) into all four lineups.

We’re proud to have John contributing to the Premium content here at RotoGrinders and couldn’t be more thrilled for him to have such an epic weekend. If you’re looking to get to know him a bit better, work on qualifying for the next major DFS Live Final, as he’ll almost certainly have a seat (or many seats) of his own.

We caught up with John to see how he is feeling after his accomplishment.

How does it feel to be the FanDuel WFBBC champion (and runner-up)?

squirrelpatrol: It really is a dream come true – I’ve always felt that FanDuel Basketball is my best DFS site and sport combination, and there had been some back-and-forth on Twitter about how profitable anyone (or myself in particular) could be chasing the qualifiers and live finals. It felt good to end that talk decisively.

What was your lineup-building strategy for your four entries?

squirrelpatrol: With four entries, late swap, a lot of people targeting the uncertainty in the last game, and the games very staggered (a full hour between the first and second games, and another full hour between the second-to-last and last games) I had an idea that I wanted to take one lineup, find someone who would be very lightly owned in the first game but could post an outlier score, and stack him with others from that first game, while also taking a second lineup and having nobody from that first game at all. That way I could adjust those lineups to be more or less chalky depending on how the first game went.

My candidates from that first game were T.J. McConnell, Mason Plumlee, Cory Joseph (who was in my 2nd place lineup) and Oshae Brissett (who ended up much higher-owned than I expected). When McConnell went crazy I almost threw my laptop out the window, and there was a really sharp contrarian lineup with McConnell in it by fyoassumptions that led for most of the contest. The only other lineup with McConnell in it was by mazwa, and that lineup made a late charge and was the last lineup I passed before I ended up in first place. Thankfully the Malcolm Brogdon and Mason Plumlee combo pulled through for me with the other players from the later games.

You have been a dominant force in the live final arena. What do you attribute this success to?

squirrelpatrol: I did a series of shows during the NFL season and the beginning of the NBA qualifiers with Erik Beimfohr called “Q-Hunting” that really helped focus my thinking in this area – the extra thought, studying and game theory that go into winning a qualifier or live final for a specific slate.

As a RotoGrinders reader I always wondered how much thought goes into things like the projections, and then Chris Gimino invited me to the projections team chat – I saw guys arguing for hours (literally back-and-forth all day) over how much Monte Morris sitting would impact Will Barton’s 4th-Quarter assist rate and knew those guys were way out of my league on projections. The knowledge and talent here at RotoGrinders is off the charts – late in the final I was competing with Krayton (Kristi) and Drizzy26 (Andre) from here at RG, and at different times very late in the contest FanDuel had each of them projected as beating my lineups.

Any special plans/purchases with the winnings?

squirrelpatrol: Yeah people might not realize it because the contest paid out in fiat but $700,000 is a lot of money – it’s like 12 or 13 BTC and will probably be even more by the time this is published. We already had a vacation planned for later in May so we’ll definitely enjoy that, and I already had a plan that I wanted to play DFS and do content very lightly this summer while taking some classes focusing on building additional technical skills. This will help out with that and pay for some nice dinners along the way.

Thanks to John for taking the time to answer some questions. Congrats again, 🐿️🐐!