The Tool Tip series will highlight the top MLB DFS hitting plays for the upcoming slate.

Today we will be using BvP numbers found in the Daily Batter Hub to help us in our quest to be profitable. The Daily Batter Hub, available to all, is a full suite of tools and has a number of different tabs to help you locate the most favorable hitting matchups while building your lineups.

BvP or Batter vs Pitcher data is one of the hotly contested topics in all of MLB DFS (check out CheeseIsGood’s thoughts on the debate here). There are people who feel strongly on both sides of argument, and if you are a believer, we offer a great tool for you!

Freddie Freeman – Freeman has completely owned Juan Nicasio in their meetings, to the tune of four home runs, a triple and a double in 12 ABs. Juan Nicasio is giving up 2.35 HR/9 to left-handed hitters this season and Freeman is one of the best hitters in the game. Freeman this year has a .210 ISO, .360 wOBA against RHP. Although those numbers are not mind blowing, they are very good for a player being on a historically bad offensive team. If he gets some pitches to hit tonight, he should continue to have his way with Nicasio.

Miguel Cabrera – All the BvP lovers are going (and pretty much have to be) interested in Cabrera, who has just completely owned Phil Hughes in his lifetime. This is one of the bigger sample sizes at 41 ABs. Cabrera is batting .439, with six home runs and a 1.465 OPS. Most sample sizes are not as large as this one; if you use BvP as part of your research, Cabrera should be in your lineups,

Robinson Cano – Many people thought Cano was done after a very disappointing season last year, but he has come back looking very good in the early part of this year. He has also owned Ubaldo Jimenez in his lifetime, posting a .545 average, two home runs, and a 1.856 OPS. Cano has smashed RHP this season with a .362 ISO and a .452 wOBA. He seems back and has shown success against Ubaldo in the past.

Nelson Cruz – Cruz is a notorious lefty smasher, and unlike his teammate Cano, he has had zero success against Jimenez. In 12 ABS, Cruz has been held hitless, and an even more alarming stat is the nine strikeouts. Not having a hit is one thing, but striking out 75% of the time just goes to show how Cruz has not figured out Jimenez. 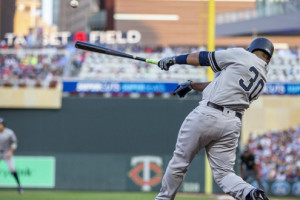 Edwin Encarnacion – In one of the largest sample sizes of the day, Encarnacion has been dominated by the talented Chris Archer in their history. He is batting a poor .143 and only has three hits in 42 ABs. The interesting part about those three hits though is that all are for home runs. Edwin is not hitting Archer often but when he is, the ball is being hit hard and far.

Jose Bautista – It is very surprising to see six players from TOR on this list today. Most people consider TOR as the best lineup in baseball and it just goes to show how good of a pitcher Chris Archer is when he is on. Bautista is a very similar story to his partner in crime, only having four hits in 37 ABs. Of those four, two have gone for home runs, but he has at least been able to draw six walks. One way to find a possible pitching option is to see if a lot of players from one team are showing up in this section. Tonight, Archer is standing out, and he makes for an excellent tournament play.