If you haven’t checked out Monkey Knife Fight before, it’s a prop-based fantasy sports website with a variety of props contests you can enter. Unlike other articles here on RotoGrinders, we aren’t just giving you the research – we are giving you recommended picks. First time depositors can use the Monkey Knife Fight promo code ‘GRINDERS’ to get a deposit bonus of 100% up to $50.

Charlie Morton vs Tanner Anderson (+2.5): Total Strikeouts: We don’t have a huge sample size of Anderson in the majors, but looking at his major and minor league numbers, we see a guy that doesn’t strike out guys at a high rate (projected to be around a 15% K rate guy), and one thing we do know about him is that he struggles with control. Anderson draws a matchup against the Rays, who are not only a good hitting team overall but are a patient team that can work the count and do a whole lot of damage. The likely scenario here is that Anderson does not make it too late in the game here and only ends up with a few Ks. Morton, on the other hand, is one of the best pitchers in the league right now and has a K rate up over 30%. He draws a below average matchup here for Ks, but he’s an elite K pitcher and 2.5 is way too low of a line here. Just take Morton and move on.

Tommy Pham (+.5) vs Khris Davis: Total Runs/RBIs: This prop right here is all about the matchup and the tiebreaker. Morton is one of the top pitchers in the league, as stated above, and Davis is going to struggle this game. Morton owns an elite .229 wOBA and .079 ISO vs. righties, and Davis is struggling vs. RHP this year, owning a .291 wOBA. Meanwhile, Pham has a matchup against a guy who’s making his first start in the majors, and he has been elite against RHP this year. His team also has a 1.5 higher implied run total. Add in the fact that Pham has the tiebreaker and there is a decent chance that the A’s don’t even score a run here, so Pham is the obvious decision.

Mike Trout vs Shohei Ohtani (+.5): Total Bases: I generally don’t like giving up the tiebreaker here on MKF, especially when it’s against an elite pitcher like Ryu, but this is Mike Trout that’s getting the platoon split against Ohtani, who struggles greatly against LHP. Looking at the numbers, Trout owns a .442 wOBA vs. LHP while Ohtani has struggled against LHP his whole career. Vegas currently has Trout pegged at -225 to get a hit here and Ohtani isn’t even on the board. Just roll with Trout, as chances are he will get a hit and Ohtani will end up with a big fat zero.

Cody Bellinger (+.5) vs Joc Pederson: Total Runs/RBIs: This part of the prop was the reason that I took it. Bellinger is likely the MVP of the league at this point in the season and gets a matchup with a platoon split. While Pederson has been great this year, Bellinger is on a whole other level. He owns a .501 wOBA on the year and if Joc does end up scoring, there’s a decent chance that Bellinger is the guy who hit him in. Take the better hitter who’s getting the platoon split and the tiebreaker.

The over here for total bases is 6.5 and I took Arenado, Story, and Blackmon. Looking at Vegas props, all three of these guys are around +300 here to get a home run (meaning that they are sitting at around 3-1 odds of getting a home run). Additionally, each of these hitters is sitting at -400 for getting a hit (meaning they will likely get a hit in this spot 4 out of every 5 times). Vegas currently has this game pegged at an 11 total, and Darvish is a guy that will likely struggle, considering he’s a pitcher who throws sinker and a curve that will likely be less viable in Coors due to the altitude (the thin air makes the ball drop less). The over on total bases hits easily here. 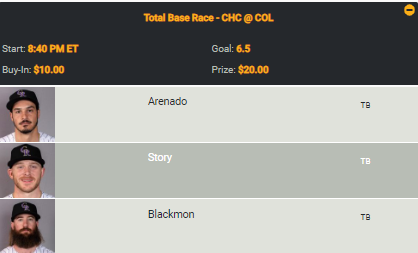