NBA DFS: How Much Does the Opponent Matter?

DvP stats are big for daily fantasy basketball players. It’s not quite as important as the opposing pitcher quality in baseball since basketball is a team sport, but obviously certain players are in better spots against certain defenses than others.

The Numbers on Opponent Quality

I chose to break down opponent strength by looking at Opponent Plus/Minus Allowed, which is the points above or below salary-based expectations a defense has allowed to a specific position. For example, if the Cavs play three point guards whose collective salaries suggest they will score 75 points over the long run but Cleveland allows only 69 points, they would have an Opponent Plus/Minus Allowed of -2.0 PPG (which would be good for them and bad for opposing point guards).

So with that in mind, here’s a look at how Opponent Plus/Minus Allowed has affected actual player value. 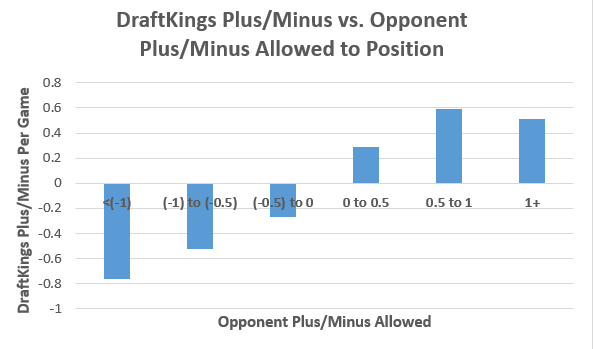 This relationship is pretty clear. I also charted Plus/Minus vs. Opponent Rating, which is simply a percentile rank for a defense. 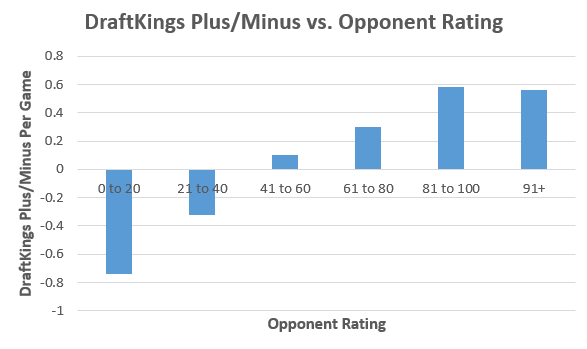 Defenses that have ranked in the top 20 percent at stopping a position, for example, have allowed around 0.7 DraftKings points per game fewer than what you’d expect based on opponent salaries.

So there’s definitely a relationship between opponent quality and expected performance, as we’d expect. But here’s why I think it isn’t that important.

Editor’s Note: This is one of the many valuable DFS lessons that can be found over at RotoAcademy. Click here to browse through all of our free/premium offerings and improve as a daily fantasy sports player!

The Value of DvP Stats

First, you can see the Plus/Minus numbers here really aren’t that substantial. The difference between a top 20 percent defense and a bottom 20 percent defense is somewhere around 1.3 expected points per player per game. For such a drastic change in defensive quality, that’s not a massive number. There are a variety of other stats that can boost your Plus/Minus more than 1.3 points per game.

One of the reasons for this, I think, is that it’s sometimes difficult to accurately label players’ positions. LeBron James can play pretty much every position on the court, and his role within the offense can totally change based on where he’s playing and who is around him. Further, certain teams use positions differently than others. It’s difficult to say “this defense plays this well against power forwards” when where various power forwards shoot and how they play in general changes so much. 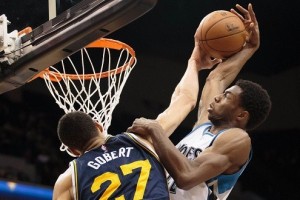 The biggest reason I think DvP data is overvalued, however, is that it’s used so much by the average player, which limits its usable value in tournaments. In GPPs, we’re looking for the biggest possible edge over the field. Well, DvP stats can surely help you find some additional player value, but if you’re using something that most of the field is also using, you’ll run into high ownership.

If a stat gets overvalued so much that the public thinks it is more important than what it is, then it can make sense to actually look for players who such a stat says aren’t in good spots. I think we’re at that point with DvP data. In every sport, I specifically like the idea of targeting studs in perceived poor matchups. A Russell Westbrook can go off against anyone; if you can get him at reduced ownership because of his matchup—something that’s a negative but not nearly as much so as what people believe—then that’s a win.

• Secret 1: Team Strength and the Vegas Lines
• Secret 2: How Much Does Value Matter?
• Secret 3: Timing Is Everything
• Secret 4: The Effect of Travel
• Secret 5: How Much Does the Opponent Matter?

Want to keep reading? Purchase the course and learn from the best!