Welcome to another Monday edition of the Starting Five. We have a really fun 10-game slate that’s already featured a ton of injury news, so sifting through it all to find the best values will be the key on the slate.

With all this value, there is going to be a fair amount of chalk today, but I want to turn your attention to a pivot at every position. Not every one of these guys will go off (if they did I would be in the Magic 8-Ball business) but rather are names you could use to give yourself a different lineup construction than the field. All prices/stats are focused on DraftKings.

With Lou Williams and Wesley Johnson already ruled out, Evans will be propelled into a high-usage role against the Spurs. Evans put up over 40 DK points on Friday in a similar situation against the Wizards. While the Spurs matchup isn’t great on paper, they have been giving up big games to guards this year. The presence of Austin Rivers will limit Evans to the 12-14 shot range, but at $3.6K there is still a ton of value in this play.

Other Options: With Dennis Smith Jr out, Yogi Ferrell will be chalky, but don’t forget about Devin Harris off the bench as a pivot. 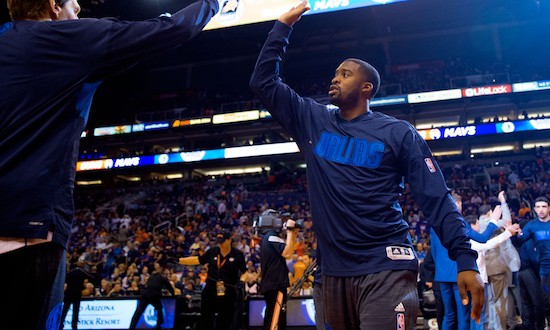 There will be lots of buzz about C.J. Williams of the Clippers and other value guards, but I like Wesley Matthews in this spot. Matthews plays a ton of minutes (ranging from 32-36 on most nights), and with Dennis Smith Jr. off the floor, he gets a 1.5% usage bump. This game against Phoenix will be one of the faster-paced games they’ll play all year (not great for Dirk’s minutes either). Sure, Matthews can be too passive from time to time, but if he gets going in this spot, the upside is 35-45 DK points, which would make him a must roster to win a GPP.

Other Options: C.J. Williams will be in line for more minutes with Lou Williams out, and he looked good against the Wizards. If Goran Dragic sits, Tyler Johnson could be in line for 30+ minutes as well.

I hate Josh Richardson as much as anyone, but with Dragic and Waiters questionable (and Ira Winderman’s tweet made it sound like they won’t play to me), the Heat will only have eight players dressed for this game, the NBA minimum. And one of them would be Udonis Haslem. This means there will be a ton of minutes available (would expect 35+ from every starter). With all those guys out (small sample alert), Richardson holds a 30.6% usage rate and is averaging 1.26 DK points per minute, and that isn’t even taking into account the fact they are playing the bad Hawks D. To me, Richardson becomes a lock if Dragic/Waiters sit.

Other Options: Wayne Ellington will be in a very similar situation to Josh Richardson. He doesn’t do much peripheral stat work but could be forced to take 15+ shots in this game. If Kristaps Porzingis is out, don’t forget about Michael Beasley.

Markkanen has been out last week with back discomfort, but he went through shootaround and will start, according to Bulls coach Hoiberg, which is good because his price isn’t like that of a starter. Markkanen has a usage rate this year of 23.8% and is averaging .98 DK points per minute. Projecting him to play 30-32 points, that puts him at 29-31 points in a neutral matchup, but he’s facing the Dario Saric and the 76ers, which is a plus matchup for him. The concern with the rookie is the minutes, with Mirotic and Portis playing so well, but in GPPs I think he is worth the risk, as I don’t think the Bulls would play him unless he was 100% ready to go.

Other Options: Aminu draws a good matchup against Taj Gibson tonight. His 60% from three rate isn’t sustainable, but he should get more looks than normal tonight. Jordan Bell will be chalk, but he’s been only playing 24-26 minutes, and at $4,500 he can actually bust now.

The Suns center rotation has become predictable. When Tyson Chandler plays, he logs 27-30 minutes on average, and tonight he gets a very good matchup against Dallas. The Mavs are the worst rebounding team in the league, so projecting Chandler for a floor of 10 rebounds feels safe in this spot. Dallas is also constantly running at least one big on the floor, which means there won’t be a run-off-the-court situation for Chandler. This is a spot where a 15/20 type of game isn’t out of the question, which would mash his $4,300 price tag.

Other Options: The Heat are depleted in the frontcourt, so Kelly Olynyk and Bam Adebayo should be in line for big minutes and opportunity; they’re listed at $5,000 and $4,100 respectively. The minutes are a huge question, but Amir Johnson ($3,500) will be starting for Embiid tonight, and we know Robin Lopez is the worst rebounding center in the entire league.