Welcome to another Monday edition of the Starting Five. With this being a eight-game slate, there is going to be a fair amount of chalk today, but I want to turn your attention to a pivot at every position. Not every one of these guys will go off (if they did I would be in the Magic 8-Ball business) but rather are names you could use to give yourself a different lineup construction than the field. All prices/stats are focused on DraftKings.

Dunn’s dud on Saturday was very predictable, as ESPN’s Schedule Losses article ranked it as the third-hardest game on the schedule. It was the team’s third game in four days (and fifth in seven days), and the Bulls had to travel for the final game of the stretch. Hopefully people have soured on Dunn, because after a few days of rest he should be able to pay off this salary big time in what will be a very fast game (221 total). It doesn’t hurt that the Bulls are up to sixth in pace.

Other Options: Malcolm Brogdon ($4,800) was inserted into the starting lineup over the weekend and put up a couple solid games, and now he has the best matchup to date against the Pacers. Rajon Rondo ($5,500) has had a price freefall after two games of really low minutes; that could be a new trend or just noise you can capitalize on.

Jamal Murray’s minutes fluctuate greatly, based on the mood of Mike Malone, but when Murray is playing well he sees minutes in the mid-30s, which always gives him tournament appeal. He draws a matchup against the Warriors, and his scoring will be needed to keep up. With talented wings in Will Barton and Gary Harris, Murray should draw the softer Stephen Curry defense. There is definitely risk here, as the Nuggets play a bunch of guys and anyone can catch fire, but Murray is in the best spot to do so today. 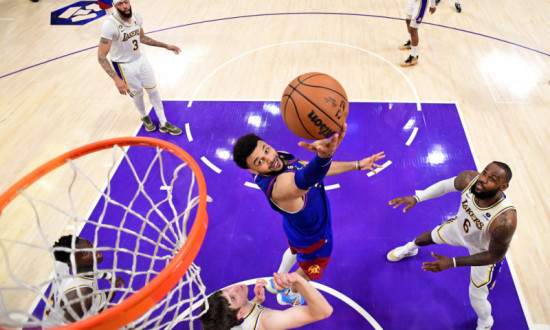 Other Options: I hate the back-to-back nature of the Hawks spot tonight, but they’ve been embarrassed two games in a row, so one would hope Kent Bazemore ($5,800) and his teammates would play inspired tonight against an injury-riddled Clippers squad. Caris LeVert says he will play tonight, but if the Nets feel differently and he sits again, Spencer Dinwiddie ($6,100) has seen massive minutes in his absence and would do so again today.

The Spurs, on the west coast and on a back-to-back, should provide pause to any DFS owner. This team can literally do anything (including sit Kyle Anderson for a massive troll), but this is a game against the Kings that Spurs should view as winnable even without Kawhi (or Aldridge and Gasol maybe). Gasol has only been playing the first halves of back-to-backs the last few weeks, so he isn’t DFS relevant in this situation. Last night in Portland, Gasol and Ginobili took over the offensive load. With those guys off the floor, Kyle Anderson enjoys a 3.7% usage bump and a +0.17 FP/min boost. Bertans has been playing a ton lately and playing well, and in the 5-10% chance that LaMarcus Aldridge sits, you have all the upside in the world with a low-owned Bertans.

Other Options: Gerald Green ($5,500) has a ceiling at this elevated price, although he has to shoot pretty darn well to get there now. Denzel Valentine quietly has taken most of Nwaba’s minutes and is now playing in the low 30s each night; plus, he needs to prove himself as a consistent starter before Zach LaVine returns. With Mirotic doubtful, Bobby Portis ($4,400) will be a very chalky option that’s hard to ignore. Domantas Sabonis ($5,300) has quietly been playing 28-33 minutes a game off the bench the last four games, going for 27.75+ DK points in all of those games.

There isn’t a single big man on the Pistons roster that can guard Cousins (Drummond and Boban are too immobile and Morleand is too small), so he simply will be able to do whatever he wants tonight. Yes, I said this article was about sneaky value plays, but when I don’t project him to be a top-five owned player (and my model is projecting him at 67 DK points), is that not a value play? Cousins will be one of my highest owned studs and I hope people ignore his massive ceiling in this spot.

Other Options: Anthony Davis ($9,700) is too cheap for being in the same spot as when he dropped 59 real points on his way to a 99-DK point performance. Did I mention the Pistons have no bigs that can contain these guys? Sabonis is also C eligible, so you can use him here or at PF. Jonas Valanciunas let me down last time I talked about him, but the Nets are running a ton of traditional centers, and for $5,100 he still has upside when he gets the minutes.