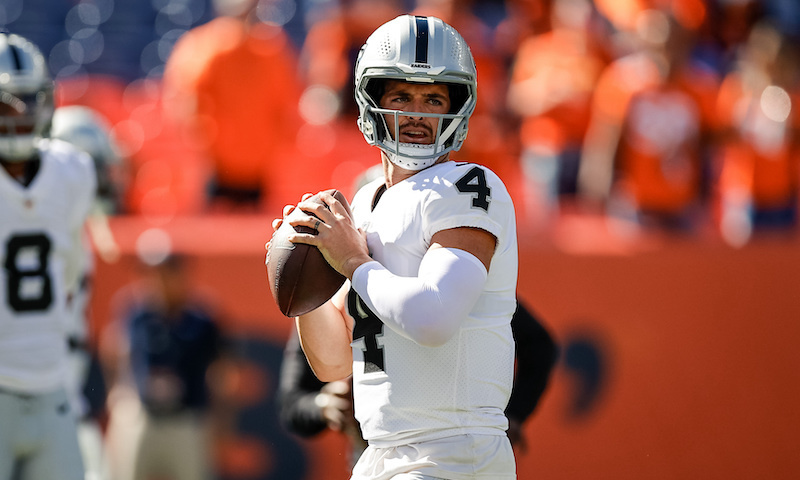 We missed Week 6 because of busy life circumstances but come back refreshed for a Week 7 slate. Three teams are favored by double digits while a few additional teams hover around a touchdown. Keying in on some of these larger spreads could be key to finding profitable Week 7 player props. Let’s dive in!

I do not want to spend a ton of time on my Week 5 results because they feel a bit less noteworthy a week removed from the Week 5 action. I was able to convert on two of our props — Dak Prescott exceeded 300 yards while James Robinson busted up his rushing over in less than a quarter after a massive run. We pocketed +0.9 units after Kenny Golladay failed to… well, do anything before being injured during the same Dallas game.

The slate dynamic is very interesting with so many large favorites and so few large implied totals. The Chiefs and Titans will be an important watch for NFL futures bettors with an implied total north of 56 points at the time of this writing. Neither team excels at defense while they both are exceptional at scoring points. Otherwise, the only other 50-point total sits in the Rams-Lions tilt with the Rams projected to eviscerate the Lions. We might be betting unders this week unless we can find a few props from that Chiefs-Titans game.

Make sure to check out our game breakdowns in the sports betting section and some NFL betting tips prior to diving into this weekend’s action.

RotoGrinders GridironIQ projects Carr for 315 yards — a pretty hefty number given a relatively high passing prop. While the Eagles only allowed 211 passing yards a game through Week 6, Tom Brady and the Bucs just amassed 297 yards through the air last week. The Raiders are not going to stop throwing the football — especially in the short and intermediate passing game. Carr’s completions prop is also interesting, but I think I prefer the yardage prop just in case Henry Ruggs can get loose.

We will start this week with an over. Grab Carr’s over at PointsBet for the lowest number at the time of this writing.

Here we go again… Another Aaron Jones sweat. Aaron Jones loves going under his player performance props when he finds his way into my DFS lineups. That said, whenever I think an under is ripe for the picking — he loves to break one very, very, very, long… and painful run. Somehow, whenever Jones breaks one of these long runs, my television automatically switches to slow motion. I get to watch every single yard that burns me. Maybe I should consider throwing him in a lineup this week?

Either way, I am taking the under. The Packers seem content to feed A.J. Dillon the football nearly ten times per game. If the game script against the Washington Football Team plays out according to the projections of online sportsbooks (Packers -8 at the time of this writing), the Packers are going to hang a number. With a big lead, I wouldn’t expect either back to feature more than the other. Jones’ upside will continue to be capped. The Football Team ranks dead last in the NFL — giving up 309.5 passing yards per game. Aaron Rodgers will get his.

Tale as old as time. Aaron Jones is going to amass 40 yards through 3.5 quarters on Sunday. Then, when it doesn’t matter, he is going to break a 50-yard touchdown run to smash his over and make me look like a fool. I am betting that doesn’t happen. Give me a very scary under on DraftKings.

Finally, DeAndre Hopkins and J.J. Watt welcome their former team to Arizona to defend the last undefeated record in the NFL. The Cardinals can move to 7-0 and get possibly the best matchup in the NFL to do it. The Texans… well, they are really bad. As 17.5-points underdogs, the Texans look to keep the game close in Arizona.

So, the online sites predict an Arizona blowout, surely, DeAndre Hopkins should be peppered. Possibly… Yet, with so much juice on the over on most sites (-143 on FanDuel), the over needs to convert 58% of the time to make that bet profitable. I don’t know. I can’t imagine Hopkins could be that vengeful given the upgrade to Arizona.

Hopkins already has two games (1/3) with only 4 targets. He cannot get to six catches if he only sees 4 passes. In the other four games, Hopkins went for six or more catches. If the odds were closer, I would be compelled to take the over. That said, given the juice and the added value in the under, I need to root against Hopkins on Sunday. Give me the under at a nice price.