Secret 2: How Much Does Value Matter?

Daily fantasy sports are all about seeking value, whether it’s an inefficiency between price and expected output or a combination of dollar-per-point value and usable GPP value based on ownership percentages.

The extent to which being price-sensitive matters, though, depends on a variety of factors, and each sport is different. This lesson is going to discuss the value of, well, value in daily fantasy basketball, as well as two simple ways to quickly identify it.

A few years ago, I was actually planning to create a site that optimized lineups based solely off of pricing. The idea was to look for differences in daily fantasy sites’ pricing to determine a player’s “true” value, then exploit that by playing him where he’s cheapest. If DraftKings thinks a player should cost X and FanDuel thinks it should be Y, the most likely scenario is that his actual worth is somewhere between.

At Fantasy Labs, I created a metric that basically does just this, and it’s called Bargain Rating. Basically, we look at how sites have historically priced players so we know the expected difference in their salaries. Then we compare that to the actual difference; the result, expressed as a historic percentile rank in terms of that difference in pricing, is Bargain Rating.

For every sport tested so far, Bargain Rating is linked extremely strongly to player value. It’s actually the best predictor of value in many cases. It’s pretty crazy, because it’s a really simple concept that helps to find value without actually knowing a single thing about a player or his opponent. It’s obviously not all that matters, but it’s an important piece of the puzzle.

You don’t need to know a player’s exact Bargain Rating to see if he’s cheaper on one site or another; you could just eyeball it. However, I’m using Bargain Rating because it’s precise and we can use it to determine how much value there is in being price-sensitive in daily fantasy basketball.

And the answer is ‘very.’ 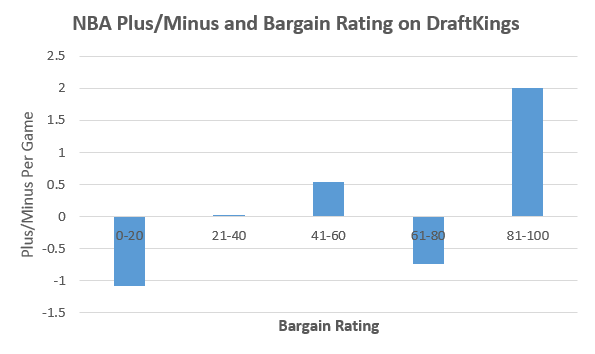 That’s especially true at the tail ends, which makes sense. When a player ranks in the bottom 20 percent in Bargain Rating—i.e. he’s in the 20th percentile or worse in terms of site salary difference—he can be expected to score around one point per game less than what you’d expect based on his salary.

On the flip side, there’s tons of value for those players with high Bargain Ratings; those at 81 or above have historically turned in a Plus/Minus of 2.00 on DraftKings. That’s 2.0 points above expectation that you can get for “free” just by looking at site pricing differences.

The reason daily fantasy basketball is such a price-sensitive sport is because of its predictability; the more often we can be sure something will happen, the more it makes sense to emphasize price. That means being contrarian in NBA is more challenging, and there’s more value in stats like Bargain Rating and other price-sensitive metrics.

So Bargain Rating matters in daily fantasy basketball, and it matters a lot. In other sports, it can pay to look for players who are struggling of late. The reason is that their salary tends to drop in those situations.

In football, for example, we’ll see daily fantasy sites react sharply to just one or two poor weeks. But there’s so much variance in football that, in many situations, prices drop for reasons that aren’t legitimate. For that reason, there’s a ridiculous correlation between salary decreases and value in daily fantasy football.

Each basketball game represents a larger sample size of plays, however. There are dozens and dozens of possessions per game, and thus it’s easier to tell when a player is truly struggling.

So what happens if we combine Bargain Rating with recent performance? I looked at solely those players with a DraftKings Bargain Rating of at least 80, then sorted them based on their recent play. To quantify that, I used Upside Rating, which is the percentage of games in which a player finished at least one standard deviation ahead of his salary-based expected output.

For example, if Russell Westbrook costs $11,000 on DraftKings, we know his implied points (based on historic pricing and performance), and we can look at performance in that price range to determine the range of outcomes for those players. If Westbrook were to finish one standard deviation ahead of his projected points in 5 of 10 games, his Upside Rating would be 50%.

So here’s a look at players with a Bargain Rating of at least 80, broken down by their Upside Rating over the prior month. 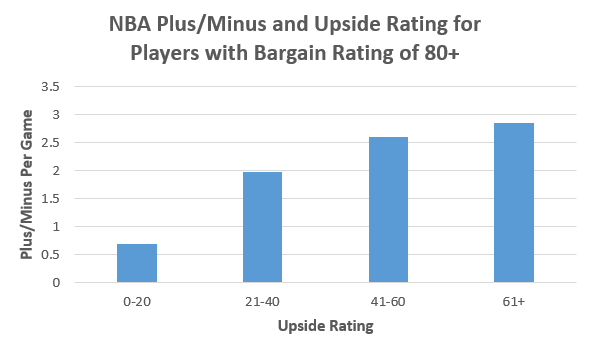 Pretty clear: “hot” players tend to offer more value than cold ones. Those with an Upside Rating above 41% have historically returned a DraftKings Plus/Minus above 2.5 points per game.

In any event, we know basketball is a price-sensitive sport and we’ve quickly created a way to identify value: look at inefficiencies in site pricing and sort based on recent play.

• Secret 1: Team Strength and the Vegas Lines
• Secret 2: How Much Does Value Matter?
• Secret 3: Timing Is Everything
• Secret 4: The Effect of Travel
• Secret 5: How Much Does the Opponent Matter?

Want to keep reading? Purchase the course and learn from the best!