We’ve had our first full week of NFL and now we have also had several days to digest the market reaction to player performances and news. Overall it seems like there hasn’t been a lot of immediate overreaction to anything but there are still some value opportunities we can exploit based on upcoming schedules and opportunity.

Kyler Murray – Kyler Murray had a great week 1 performance vs San Francisco’s great defense. After playing the 49ers close twice last season, Murray led the Cardinals to a week 1 victory via a big-time rushing performance and shiny, new stud Wide Receiver DeAndre Hopkins who obliterated nay-saying fantasy analysts by clicking immediately with Murray and catching 14 receptions for 151 yards. The schedule only gets easier from here, and Murray has a chance to pull off an MVP season in his 2nd year as Lamar Jackson did last season. The card I’m looking at specifically from a value standpoint is his 2019 Prizm Base PSA 9 card which hasn’t experienced the same upward price action as it’s PSA 10 counterpart holding only 24% of the PSA 10 value. If we go back to the end of July the PSA 9 held 30% of that PSA 10 value before they started to diverge. If the PSA 9 starts to catch back up that gives us about 25% upside in addition to the overall upside we could see in Kyler Murray throughout the season. If you’re looking for a “safe” Kyler Murray card to invest in, the PSA 9 Prizm Base card looks like a good buy. 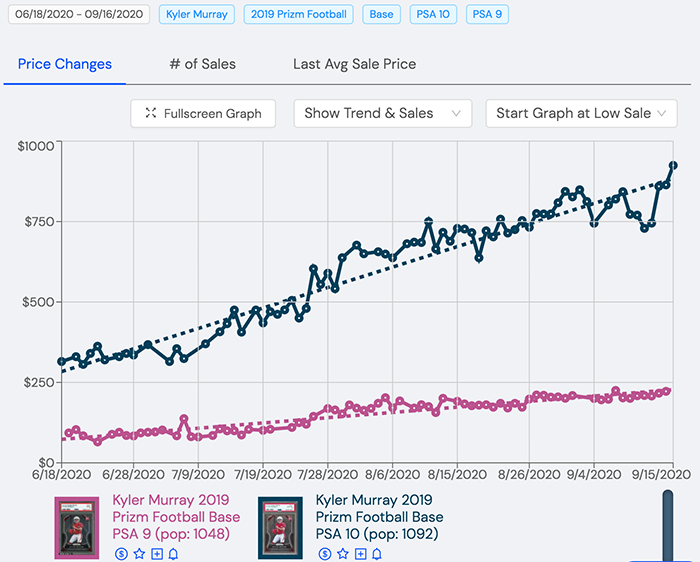 Baker Mayfield – I’ve recommended Baker a bunch and his cards have not moved in a while. He had a brutal week 1 matchup vs Baltimore but things get easy for the next few weeks apart from a game against Pittsburgh in week 6. Beyond that, if we use Warren Sharp’s Pass Success Rate rankings from last season we see that the Browns’ opponents over the next several weeks ranked 19th (Cincinnati who they face twice), 27th (Washington), 22nd (Indy), 30th (Las Vegas), and 16th (Houston who’s D is worse this year). This gives Mayfield a good stretch of games to find his mojo and start to turn things around. He can also finally get an opportunity to develop some chemistry with Odell Beckham Jr who he targeting 10 times vs the Ravens. Mayfield’s 2018 Prizm Base PSA 10 is the card I would be targeting and at a target price of $375, you can get a small 5-10% discount on it currently after a lousy week 1 performance. For an even better deal target the PSA 9 which has dropped under $70! 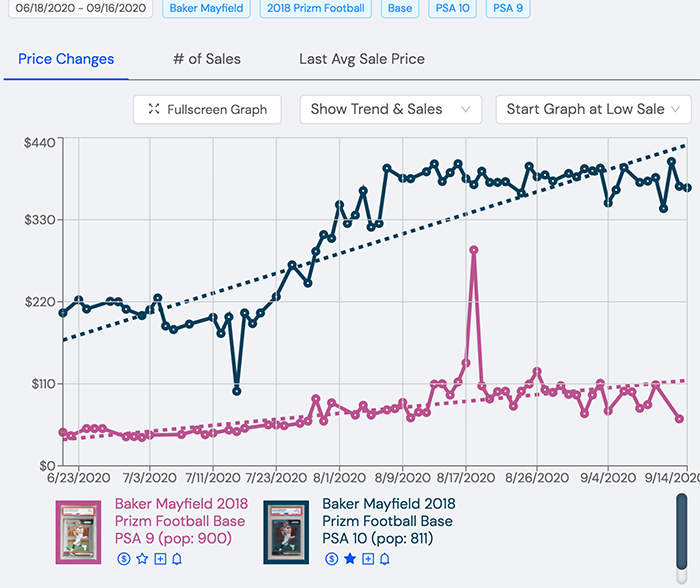 DeAndre Hopkins – We’re going to keep targeting Hopkins until his prices start moving up. As we mentioned in Kyler Murray paragraph, Hopkins had a huge debut with the Cardinals on Sunday and showed instant chemistry with Murray as we predicted he would several weeks ago. People seem to have forgotten that Hopkins has performed well with new QBs in the past including several awful ones he had to play with before Deshaun Watson arrived in Houston. Just to illustrate the absurdity of some hobby traditions, let’s check out a chart comparing Hopkins’ rookie cards to Drew Lock. Lock has accomplished nothing vs Hopkins who is an established receiver who has put up Hall-of-Fame numbers throughout his career. Hopkins rookies are super scarce too vs Lock. His 2013 Prizm PSA 10 has a population of 36, yet is only valued slightly above Drew Lock 2019 Prizm Base PSA 10 with a population of 911 ($510 vs $400). Hopkins’ 2013 Topps Chrome PSA 10 has a population of 68 and is only valued at $250. This is why I keep advocating for buying skill position players. If these price comparisons seem nuts to you too, then Hopkins’ rookie cards might make good targets at those current prices. 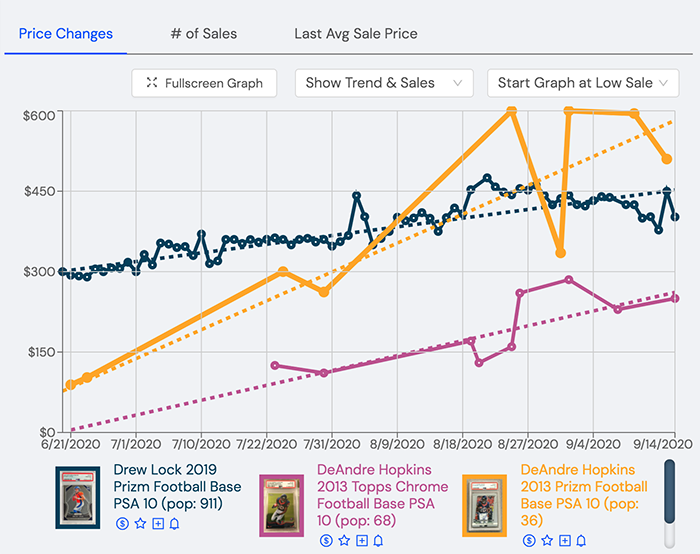 Davante Adams – Adams’ was hurt for much of the 2019 season which may have hurt his overall card prices, but he started the 2020 season strong. People had given up on Aaron Rodgers this summer, but Rodgers started off the season with a vengeance putting up 43 pts vs the Vikings. Adams was the biggest beneficiary putting up a monster 14 receptions/156 receiving yards/2 TD game on 17 targets. If that’s any indication of what’s in store for 2020, Adams should put up a huge year and could rival Michael Thomas 2019 season. Yet his cards aren’t reflecting that potential and could be worth targeting. The pop counts on his PSA 10s are very low with only 8 in existence for his 2014 Prizm cards. If you are fortunate enough to find one at the most recent sale under $150, I would recommend scooping it up.

Miles Sanders – Sanders finished up strong in 2019 and had a lot of hype in the off season as the Eagles did not sign any additional veteran running backs after Jordan Howard parted ways. Add in some promising coach speak indicating Sanders would mostly have the Philly backfield to himself and we have the perfect formula for a big breakout year for Sanders. Unfortunately Sanders got hurt a few weeks before the start of the season and that injury carried over to week 1 and Sanders had to sit the game out. His cards took a dip as a result and present us with a nice buying opportunity particularly in his 2019 Prizm Silver raw cards which have dropped from $86 to $51 (a 40% drop). I would be targeting Sanders auto cards too if you can find any steep declines using the Market Movers charts for reference. 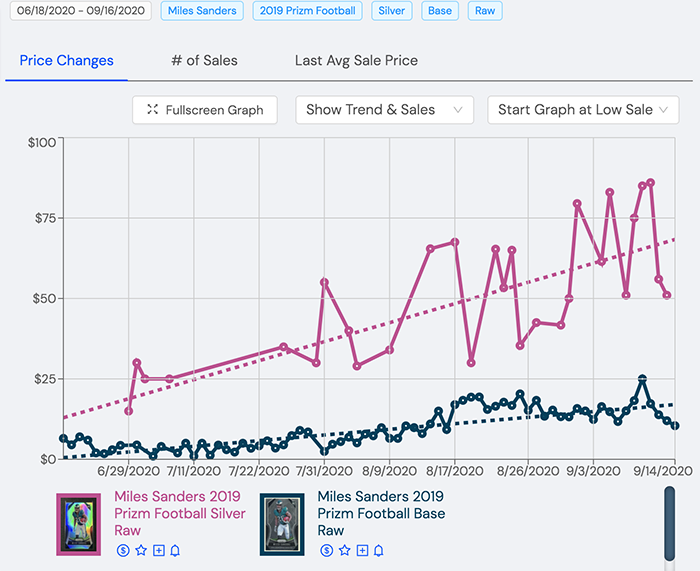