Tyreek Hill’s ADP has quickly risen following the news he will not be suspended by the NFL, but early drafters were able to get him at a huge discount. Is it even worth entering large best ball tournaments now? Erik Beimfohr says yes, and there’s a way to leverage the situation.

On July 19, the NFL announced it would not be suspending Tyreek Hill for this upcoming NFL season, sending the fantasy football community into a tizzy, with the loudest uproar coming from those playing in the Best Ball Championship on DRAFT and other large field best ball tournaments.

Last season, Hill finished the year with 87 catches for 1,479 yards and 12 touchdowns (plus a rushing touchdown and a return TD). If we exclude Week 17, he was the WR3 overall in half-point PPR scoring. However, when DRAFT opened their $3.5M Best Ball Championship in late May, Hill’s playing future was extremely unclear due to off-the-field troubles. Some believed he may never play in the NFL again, with at least a healthy suspension in 2019 seeming likely.

From that time through the beginning of June, Hill’s ADP on DRAFT was down around the 10th round. As we began to learn new and better information, it appeared that he would in fact play this season and was likely to face no more than a six-game suspension, and thus his ADP rose dramatically around mid-June. You can see the full evolution of his ADP here thanks to our very own @Josh_ADHD. 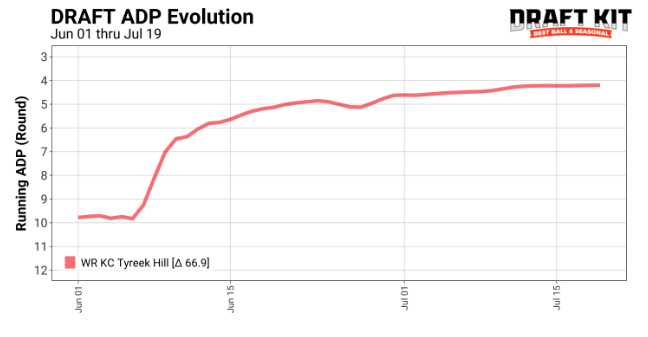 Then the news broke that Hill wouldn’t face any suspension for this season, sparking tons of debate about the Best Ball Championship. The DRAFT contest features a huge field (165,888 entries), with the tournament spanning the course of the NFL season with a $3.5M prize pool ($1 million to first!) for a $25 entry fee.

Somewhere around a few thousand entries were put into this tournament during the time when Hill’s ADP was in the 10th round, giving those who drafted him that late a pretty clear advantage over the field, so many wondered if it even made sense to continue entering this contest with the possibility of facing those Hill teams in Weeks 13-16, the playoff period of the tournament.

Getting a player of Hill’s caliber in the 10th round is an advantage, as he’s now consistently going in the second round of these drafts. But the real question is, should you continue to enter this contest knowing there are at least a couple hundred teams that potentially took advantage of Hill’s depressed price? And if so, how should you adjust your draft strategy to give yourself the best chance at winning the top prize?

The DRAFT Best Ball Championship is essentially the DraftKings Millionaire Maker, except in the best ball format played out over the entire season. The first step of the process is winning your 12-team league. If you continue to draft, this step is not affected at all by the Hill news. Everyone in your league is drafting off the same information as you, and his ADP has adjusted. No problem, amigo.

The next steps are when things get fun. Each week from Weeks 13-15, you have to finish in the top three in a 24-team contest to advance to the next week. If you make it through all three of those weeks, your team will compete in a final 27-person round in week 16 to decide the champion. Here are our experts’ thoughts on approaching the tournament.

So, how do you try to give yourself an edge in these weeks competing against some teams that got Hill in the 10th round?

You absolutely under no circumstances draft Hill. I don’t care whether he falls to the third, fourth or even fifth round of your draft moving forward. Don’t do it.

From a projection standpoint, going up against any of these teams certainly puts you at a disadvantage, but you need to try to gain leverage on the field of 165,000 entries and also on the other playoff teams. You can gain that leverage by drafting your teams assuming that Hill fails, whether that be through a poor season, injury, or by having bad games during those critical playoff weeks.

It is certainly not likely that Hill or the Chiefs have a poor season, but anything is possible in the NFL. Kansas City faces one of the toughest schedules in the league this season, including the most difficult schedule for wide receiver fantasy production, per Fantasy Pros. We can certainly debate whether defenses matter, but we at least know the road to a great season won’t be an incredibly easy one for Hill.

I don’t wish injury on any player, not even one with a checkered off-field record like Hill, but the truth is that NFL players get hurt all the time. Just last season, the league reported there were 291 incidences of concussion, 57 ACL tears and 151 MCL tears, which doesn’t even take into account other types of injuries. That’s about nine concussions and six knee injuries PER TEAM.

Even if Hill has another strong season and stays healthy, the weeks that matter the most in this Best Ball Championship format are the playoffs. During those playoff weeks (13-16), the Chiefs’ schedule is as follows:

Weeks 13 and 14 are certainly not the most difficult matchups, but in the two most important weeks of this contest, Hill draws a tough divisional foe and then arguably the best defense in the NFL. In best ball, teams will have 5-7 other wide receivers on their roster (assuming no injuries) so they have outs if he lays an egg in these tough matchups, but then that kind of defeats the purpose of the argument that these teams have such a huge edge on the field.

Additionally, if we assume that Hill has had a good season and a large number of teams still remaining have him on their roster, you gain an edge on your opponents with probably the highest-owned player in this tournament having a bad game. Your opponents aren’t totally dead like they would be in a DFS tournament with a popular player busting, but it’s still a roster spot you know they didn’t get points from that can catapult you to the top of the standings.

You can give yourself some leverage on the field against a really pivotal player in this tournament simply by completely fading him in your drafts, but you can also look to pivot to some of his teammates assuming Hill fails for any of the above reasons. Maybe his teammates score all the touchdowns in those playoff weeks? Or maybe Hill gets hurt? If so, Travis Kelce, Sammy Watkins, Damien Williams and even someone like DeMarcus Robinson stand to benefit greatly, and their ADPs are falling with this recent news.

In short, if you drafted some teams in early June and happened to scoop up Hill in the 10th round, you should feel pretty good about the prospects of those teams. But if you did not, you should absolutely not be drafting him moving forward, and you should actively be looking for ways to gain small edges against your opponents.

No, you can’t gain large amounts of leverage on the field like you can in DFS contests, but to win this DRAFT Best Ball Championship with a top-heavy prize structure, you need a laundry list of things to go right on one individual team over the course of an entire NFL season, most of which are incredibly unlikely. It’s really freaking hard. So in order to give yourself the best chance possible at becoming a millionaire in Week 16, you need to try to utilize as many edges, no matter how small, as you can when you draft your teams. And fading Hill is one of the more significant ways you can do that this draft season.