Training camps will soon spool up across the National Football League, which means we’ll play audience to rapid market movement due to many factors – player injuries, workload concerns, free agent signings and so on.

Where the market has reacted rapidly in many facets, it still lacks in others. The most beneficial market oversight we can exploit throughout the remainder of the preseason is unsexy offenses.

What is an unsexy offense? As you can imagine, it’s an offense that we might find offensive at first thought.

“Those guys are gonna be awful! They’re only projected to win 5.5 games.”

“How will they score points?”

If we can control our emotions a bit and think through the problem with some logic, we might find that we can exploit a situation that can bear massive gains. How? Low-owned, low-cost offenses offer excellent opportunity to leverage against the field in the higher-stakes playoff weeks (Weeks 13-16).

Below, I’m going to run through a few offenses that provide excellent scoring upside at a fraction of the cost of more popular teams. The idea is to stack these offenses alongside more traditionally-viewed “power” offenses (Kansas City, Los Angeles Rams, etc.) to improve your overall point potential and separate yourself from the field with regards to roster commonality.

I looked at June drafts from Fanball Bestball10s for team-level draft information since I have pick-level data from those leagues. I binned these drafts into NFL offenses, and found eight offenses that I believe are worthy of low-cost, high-leverage stacking in your Bestball portfolios.

The centerpiece of utilizing this strategy, in almost every case, is the cheap quarterback. You’ll notice that each one of these options offers a signal caller going after QB16 in drafts, which equates to the 13th round or later. While this is likely to be your QB2, it is incredibly viable to start taking quarterbacks in this range and stack your roster with three QBs from these low-cost offenses, then stack accordingly.

The Titans are perhaps my favorite cheap stacking target in drafts this summer. Confidence in this offense is at an all-time low due to a few factors, the primary being that they finished dead last in passing offense in 2018. I believe they present the best opportunity to outpace ADP by multiple rounds for multiple players.

QB – Marcus Mariota (QB28 – ADP 193.0)
A season removed from multiple injuries, and playing for his second contract, Mariota will challenge as a high-end QB2.

RBs – Derrick Henry (RB16 – ADP 29.5) and Dion Lewis (RB51 – ADP 141.9)
Henry is still a value at RB16 and worth drafting at the 2-3 turn if you draw the firs tor second overall pick. Lewis, on the other hand, I would sprinkle in small doses. In the event of a Henry injury, Lewis should see close to bellcow usage.

WRs – Corey Davis (WR37 – ADP 90.4) and Adam Humphries (WR73 – ADP 191.4)
Davis was drafted in the fifth round last summer for all the right reasons. This summer, he can easily be had in the ninth round as your WR3/WR4 depending on your early construction. His target volume is incredible at this cost. Humphries can be taken in the 17th round and is worth a look as a high-floor complement on a boom-bust roster.

TEs – Delanie Walker (TE17 – ADP 145.1) and Jonnu Smith (TE41 – ADP 216)
I suspect the Titans will run more 12-personnel this fall, and this could lead to looks for both TEs, particularly in the red zone. I would draft Smith only as a TE3 with upside.

New regime, who dis? I mentioned earlier that not all of these offenses required a quarterback to be drafted for maximum leverage, and this is that offense. While you can take shots on either Josh Rosen or Ryan Fitzpatrick as a QB3 in the last round of drafts, you should expect a maximum of eight starts from either, dampening their upside at this time.

This team will be bad, but I also believe they will be pretty dynamic on offense given the talent available. Don’t forget … even bad teams score points.

QB – Ryan Fitzpatrick (QB31 – ADP 213.1)
Be prepared to pivot during training camp if it appears that Rosen will earn the starting job. I believe the Dolphins will let Fitzpatrick play while Rosen rehabilitates from his captivity under Steve Wilkes and Mike McCoy in Arizona.

RBs – Kenyan Drake (RB21 – ADP 41.4) and Kalen Ballage (RB53 – ADP 149.0)
I expect Drake to see primary usage in this backfield, with Ballage earning a healthy split for himself. In limited bellcow usage, Drake has excelled, so it’s natural to assume expanding that role should lead to dividends. Ballage is a solid receiver in addition to owning game-breaking speed.

This offense can only improve following the departure of QB Blake Bortles, though iJacksonville will likely attempt to “establish the run” and play more conservatively on offense until they’re behind and cannot. Either way, I do expect QB Nick Foles to lock onto WR Dede Westbrook as his preferred target, with RB Leonard Fournette earning a healthy share himself.

QB – Nick Foles (QB27 – ADP 191.7)
I’m hesitant on Foles, as his success will hinge on the offensive line’s ability to protect him.

RB – Leonard Fournette (RB15 – ADP 29.2)
Prior to his injury early in 2018, Fournette was shaping up to be a three-down, do-it-all workhorse. In limited work, the Jaguars happily pushed targets his way. I expect that theme to continue with new offensive coordinator John DeFilippo (recently of Minnesota) calling plays.

WRs – Dede Westbrook (WR44 – ADP 103.2), DJ Chark (WR88 – ADP 213.1) and Keelan Cole (WR97 – ADP 215.9)
Dede Westbrook is a slam-dunk pick at his ADP, and has been all offseason. Like Corey Davis, you can’t beat his receiving volume considering his cost. Entering his third season, I like Westbrook as a huge breakout candidate. Chark and Cole are players I sprinkle in during the last round of drafts.

The Jets are an offense I am targeting in drafts because they showed last season they can pile up points in relatively competitive games. The defense will allow plenty of points, forcing the offense to push the issue to stay afloat on the scoreboard.

QB – Sam Darnold (QB24 – ADP 165.5)
After taking over as The Guy in 2018, Darnold impressed across the last quarter of the season on a laughably bad team. I expect him to continue along this path with better weapons surrounding him.

WRs – Robby Anderson (WR27 – ADP 62.5) and Jamison Crowder (WR64 – ADP 171.5)
I won’t be shocked to see Crowder slide into a quasi-RB role similar to the one Jarvis Landry occupied in Miami under head coach Adam Gase. High volume, low aDOT, high weekly floor. He and Anderson are excellent complements from a role perspective, and Darnold can support both.

TE – Chris Herndon (TE12 – ADP 121.2)
Herndon became a staple in Darnold’s passing tree last season, and there is reason to believe that will continue in 2019. While he isn’t necessarily a value, he’s crucial if you’re going to build a Jets value stack.

In the AFC North, drafters flock toward Pittsburgh and, for some reason, Cleveland. I believe Cincinnati will be a much better squad in 2019 than 2018, and that will reflect on the scoreboard. Will they challenge for a playoff spot? I think that’s unlikely so long as head coach Marvin Lewis roams the sidelines, but they should remain competitive and hover around .500 for the season.

RB – Joe Mixon (RB8 – ADP 11.8)
The “value” proposition for Mixon is that he stands a strong chance of providing “Gurley Lite” production as a three-down workhorse who excels in the receiving game. At the first/second round turn, I think he is a great building block that you can stack with Green and Dalton.

WR – A.J. Green (WR13 – ADP 35.6)
The ADP is what makes Green such a value proposition. You can draft him at the round three/four turn while others reach at running back, and return borderline WR1 numbers.

TE – Tyler Eifert (TE24 – ADP 179.8)
Back from the dead (again), Eifert re-upped with the Bengals this offseason for a one-year prove-it deal. Rumor is he will fill a full-time “move” tight end role in head coach Zac Taylor’s offense, which bodes well for his ceiling. Eifert is an excellent TE3 on late TE builds.

Most believe Baltimore will run the same offense they rolled out in the second half of the 2018 season. I don’t believe this is the case, and as such, the Ravens’ passing attack is a massive buy-low you can stack cheaply.

QB – Lamar Jackson (QB19 – ADP 137.8)
Draft him as your QB2 if you choose to go with an elite quarterback earlier, or as your QB1 in a late QB build. Either way, his legs offer a tremendous floor, and his passing production will improve with better weapons (and a weaker defense) surrounding him.

WR – Marquise Brown (WR66 – ADP 175.7)
Baltimore put a heap of draft capital into Brown, and depending on how his foot injury heals, you can expect him to be a Week 1 starter. While viewed as a deep ball specialist, he possesses a skillset that some might compare to DeSean Jackson.

TE – Mark Andrews (TE16 – ADP 137.6)
Although his ADP has steamed recently due to Twitter hype, Andrews still offers excellent value at TE16 as your TE2 with TE1 upside. You can also consider him an anchor in three-TE builds. 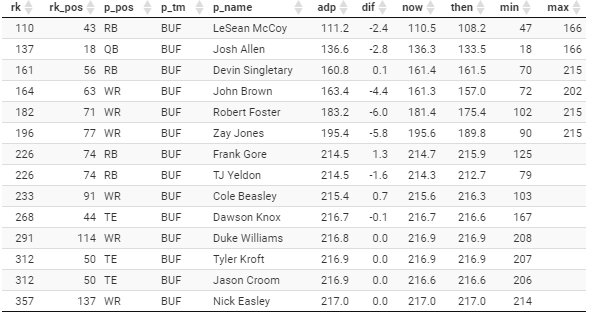 QB – Josh Allen (QB18 – ADP 136.6)
I still have reservations about Allen’s ability to read defensive alignments and make pre-snap adjustments. He literally could not do this in 2018. What he could do, though, is run for his life and create huge plays from nothing. That ability didn’t disappear over the offseason.

RB – T.J. Yeldon (RB74 – ADP 214.5)
Yeldon carved out an incredibly productive campaign with Blake Bortles and Cody Kessler last season in Jacksonville. If one little thing breaks his way leading into this season, he moves into a starting role. At this cost, you can’t resist Yeldon as your RB5/6 late in drafts.

Lastly, let’s discuss New England. Not all of the pieces are cheap, but the Patriots once again project to face one of the weakest schedules in the NFL. Despite this, murkiness among their skill positions presents a unique stack opportunity at low cost, highlighted by Tom Brady’s low ADP. 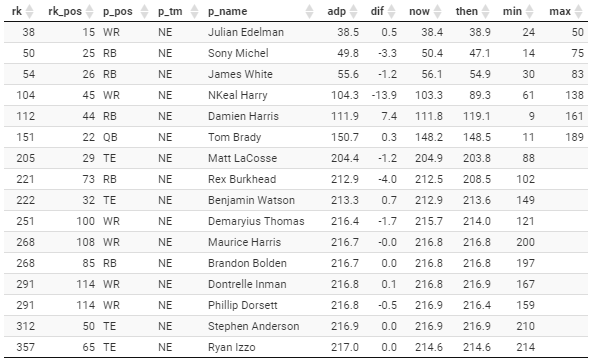 QB – Tom Brady (QB22 – ADP 150.7)
When is the last time you could draft Brady outside the top 20 quarterbacks? This wasn’t even the case when he was facing a four-game suspension in 2016.

RBs – James White (RB26 – ADP 55.6) and Damien Harris (RB44 – ADP 111.9)
White is not cheap, but he offers the steadiest workload of all New England skill position players. I don’t necessarily like spending a fifth round pick on a receiving back, but in this case, you might make an exception.

WR – Julian Edelman (WR15 – ADP 38.5)
This might be a slight value for Edelman, still, given the receiving options around Brady. It’s difficult to find a wide receiver with a better floor projection. What you spend for him, you make up in Brady’s cheap cost.

TE – Ben Watson (TE32 – ADP 213.3)
You know you will only get 12 games from Watson given his pending four-game suspension. As your TE3 in a three-TE build, however, you accept this because you draft him in the last round knowing he could score 8-12 touchdowns across those 12 games.

Embracing the unsexy offense is key to winning best ball leagues and critical if you’re looking to make a run at the DRAFT Bestball Championship. Stacking these offenses in doses across your best ball portfolio will increase volatility in a positive manner, and potentially guide you to the biggest prize yet.

Good luck! I hope to see you in my draft rooms.