Announcing the 2017 RotoGrinders Tournament Player of the Year

In 2016, SaahilSud had a year for the ages, running away with the RotoGrinders Tournament Player of the Year race in record fashion by totaling 110,185 rankings points.

The 2017 race was much more wide open, with three players topping the 100,000 mark in points. A late push from ChipotleAddict, however, would see him surpass his two closest challengers, papagates and Awesemo, to take down the prestigious 2017 RotoGrinders Tournament Player of the Year award. He would do so with our highest mark ever, hitting 118,123 points.

(For those unfamiliar with how the TPOY rankings work, we take your top 50 scores from GPPs over the course of a year. For more info, read our TPOY FAQ.)

ChipotleAddict, also known as Tom Crowley, was gracious enough to answer a few questions for us after being informed he had won our TPOY. Congratulations Tom on this achievement! 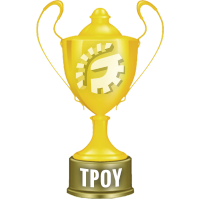 RotoGrinders.com: Do you follow the RotoGrinders rankings and TPOY race? If yes, what does winning the RG TPOY mean to you?

Tom Crowley: Turns out, people enjoy looking at themselves at the top of any leaderboard. It wasn’t something I paid attention to until I noticed I was leading late in the year. Then I started checking more often than I’d like to admit.

In this game it’s hard to share your success with others outside the industry without bragging about how much money you’ve made. It’s nice to have something I can share with friends and family that is slightly less cringeworthy than #screenshotlife.

RotoGrinders.com: 2017 was obviously an amazing year for you. What would you attribute to your success? What did you learn from your experiences this year?

Tom Crowley: Tough question to answer without sounding pretentious. One of my tilt peeves is when people feel the need to attribute their success to something they personally did. Having an outlier year is simply impossible without variance going your way. So, the most honest answer is probably that variance had more to do with winning TPOY than anything I did. But to answer the question the way it was intended, I think my experience is what gave me a chance to succeed.

What people probably don’t know is that I was deeeep in the red going into November. This caused me to evaluate my game selection and scale back my volume where I wasn’t confident in my edge. However, I didn’t lose confidence in my process like I might have in the past. Losing just forced me to take a hard look at what I was doing, and why. I believe this led to some strategic improvements that I might not have otherwise found.

RotoGrinders.com: You regularly contribute to REG (Raising for Effective Giving) and even wrote an article about the cause for RG a couple years ago. Are you still passionate about that and what would you like to say about it to our users?

Tom Crowley: Yes, outside the pure competition of DFS, earning money to contribute to the world’s most effective causes is what drives me. Our Matching Challenge this year (2017charitydrive.com) was our largest to date, raising over 4.5 million dollars. It is clear that the data-driven approach of effective altruism is a growing movement that appeals strongly to people in this industry.

Playing a game for a living that contributes nothing to society can be a deeply unsatisfying endeavor. I’m certain I haven’t been the only one to question if this is the right way to spend my time over the years. I now believe I’m doing exactly what I should be doing. I have yet to come up with any other way to make a bigger positive impact on the world than through the opportunity DFS has given me.

Tom’s article: How Kam Chancellor Saved 22 Lives In One Play (And You Can Too)

RotoGrinders.com: The DFS landscape has changed plenty over the past year. What changes do you like? Not like? What adjustments have you had to make as a result? Where do you see DFS going in the future and do you expect to continue to be involved?

Tom Crowley: Hard to hit on all the changes that have happened recently, but it’s clear they all hurt my bottom line. I think many of the changes to protect the recreational players were inevitable. Some of the ways they are doing it seem good (eliminating late swap from NBA), others I think are making the product worse for everyone involved (eliminating SNF/MNF from the main NFL slates). These are tough questions I’m not informed enough to have a strong opinion on.

Where I do feel the sites are being shortsighted is regarding rake. I think they are looking at the data and seeing that players aren’t very rake conscious in any given contest, but it is clearly a drain on the ecosystem that is driving players of all skill levels away.

RotoGrinders.com: What are your hopes/goals in 2018, both personally and professionally?

Tom Crowley: I hope to be able to relax and enjoy the ride a little more in 2018. If I asked my 12-year-old self what I hoped to be doing with my life, speculating on sports in a way that helps others would be pretty high on my list (just behind playing for Chelsea). This is a unique opportunity that not many people get a chance to experience. I want to try to slow down and appreciate it for what it is.

Congratulations again to Tom for winning the 2017 Tournament Player of the Year award. He is our sixth winner of this award and joins DP47, alsmizzle, McJester, ehafner, and SaahilSud as winners of this honor.

The RG TPOY Rankings will be reset for the 2018 race soon!

Do you have what it takes to be the best of the best?