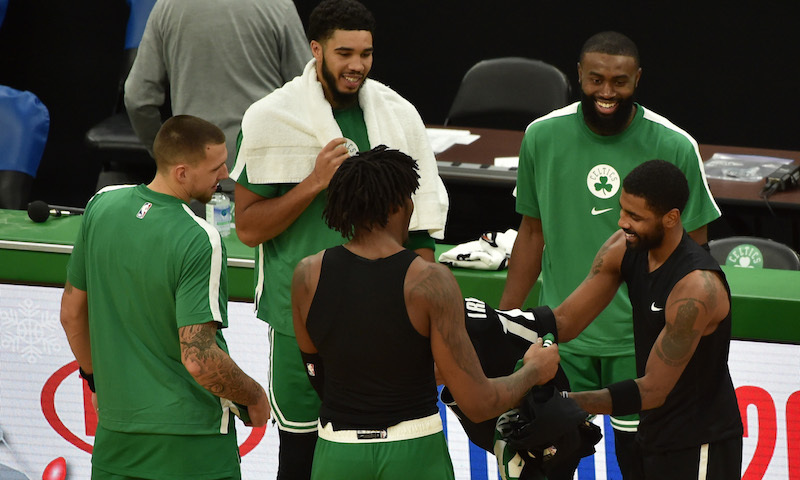 Santa is bringing sports bettors plenty of action on Christmas Day, including five NBA games featuring some of the league’s biggest stars and best teams.

Of course, we hope there are a few wins delivered throughout the day, but even if not, there are plenty of holly jolly promos to take advantage of at online sportsbooks. Before we take a peek at the odds and Christmas Day betting notes, here are two promos you don’t want to miss.

Christmas Day tips off with Zion Williamson versus Jimmy Butler. Not a bad way to begin, right?

The line against the Heat will be similar. Using our “NBA odds”: comparison tool on Christmas Eve, you can see the Heat are 4.5-point favorites at few sportsbooks but only -3.5 at BetMGM and PointsBet. Obviously, bet at the sportsbooks with the best line for whatever side you prefer.

Personally, I lean towards the Heat in this one. Bam Adebayo will be a physical force down low, capable of slowing down Zion. Meanwhile, Jimmy Butler will matchup with Brandon Ingram. I don’t expect the Pelicans to shoot another absurd eFG% of 64.4%. Hopefully their loss to the Magic was just an opening night hiccup and not part of an NBA Finals hangover — remember, it wasn’t that long ago that the Heat were battling with the Lakers inside the NBA bubble.

Next up, the Steph versus Giannis. The line opened Bucks -7.5 but bettors are staying far away from the Warriors after an embarrassing loss to start the season. The Bucks didn’t win, either, but they would have had a chance to beat the Celtics in overtime if Giannis had made his second of two free throws in the final seconds of the game. Now today’s line is double-digits, with 89% of money on the Bucks.

I can’t trust a team with Andrew Wiggins shooting the second-most shots on their roster. As we learned on opening night, that’s a recipe for disaster. However, this spread has moved too much for my liking.

The Warriors obviously appear to have offensive problems, and the Bucks played at one of the slowest paces on Tuesday night, which is why I like betting Under the highest point total of the day.

Both of these teams exceeded expectations to begin the season. The Nets blew out the Warriors and the Celtics upset the Bucks. One interesting note is how deep Brooklyn went into their rotation, as 15 different Nets players touched the court against Golden State.

In their first game together, Kyrie Irving and Kevin Durant scored 26 and 22 points, respectively. Going against Marcus Smart, Jayson Tatum, and Jaylen Brown will be a totally different test than they saw against Golden State, but the Irving-Durant duo might be the best offensive one-two punch in the league so long as Durant is fully healthy.

After seeing how the Nets played in their first game under Nash and Mike D’Antoni, plus the fact that the Celtics scored 122 points against Milwaukee, my lean is Over 226.5 points.