Throughout the NFL season, this article will use ScoresAndOdds’ ParlayIQ tool to examine building same game parlays across various sports betting sites for primetime NFL matchups. We will examine stats, roster news, trends, player props and betting odds across sportsbooks to pick the most profitable combination of outcomes for primetime games. Now let’s build our Cowboys vs. Giants same game parlay for Monday Night Football. 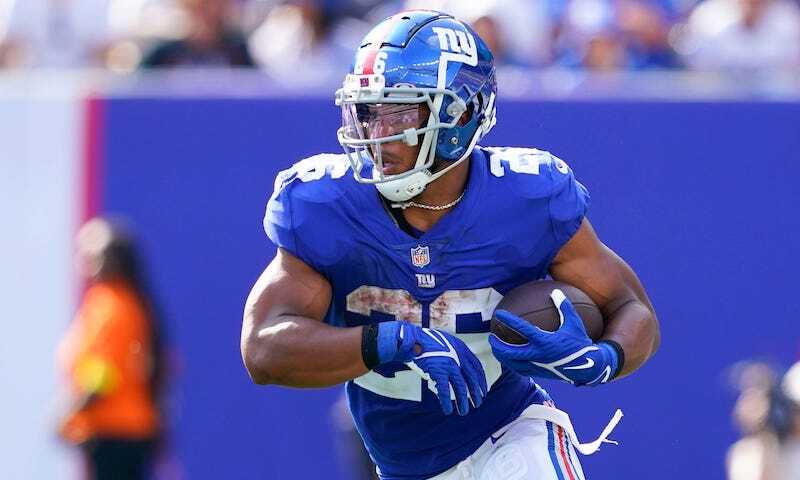 Monday Night Football brings an NFC East rivalry that tends to be featured in primetime every season. But despite the familiar matchup, the circumstances are quite different this year. Dak Prescott will not be in the lineup after his opening week injury. Instead, Cooper Rush will look to shepherd the Cowboys to another victory against the undefeated New York Giants. Yes, undefeated. Saquon Barkley brings a clean bill of health, and the G-Men have opened the season 2-0.

Will the Giants close the evening as one of the only remaining undefeated teams in football? Will Cooper Rush bring the Cowboys to an improbable 2-1 record?

For us, the game is more about the gambling sweats and less about record ramifications. We need to build a sweat in the likely case that this game is a dud. Let’s use the ParlayIQ tool from ScoresAndOdds to cook up that fun sweat for Monday Night Football.

The final game of Week 3 is projected by sports betting sites to be a tightly contested affair. At the time of this writing, FanDuel Sportsbook has the Giants favored at -1 with a 39.5 game total. Low-scoring and close? Yes, this sounds like an NFC East game.

On the New York side, Wan’Dale Robinson remains out with his knee injury, while Kadarius Toney is doubtful with a hamstring issue. The Giants seem likely to be without Kayvon Thibodeaux — a big concern given the Giants’ paltry 4.62% sack rate thus far in 2022.

With regard to pressuring the quarterback, only the Bills have been better than Dallas thus far. The 11.27% sack rate from Dallas has been the biggest contributing factor to their 1-1 record and relatively competitive play. Cooper Rush played very well in relief of Dak Prescott, leading the Cowboys to an unlikely victory over the Bengals at home in Week 2. Rush seems very competent with all of the weapons at his disposal.

To me, this game feels like an ugly one. The Giant offense remains less than stellar, while we likely shouldn’t expect the Cowboys to fly high with Rush under center. Instead, this game feels like a back-and-forth defensive struggle, with the Dallas defense doing most of the disruption. Let’s build some form of game script centered around the under.

The game total is pretty low but with great reason. The Giants continue to struggle on offense despite their winning ways, and oddsmakers can’t project the Dallas offense to blow the doors off of anyone. Daniel Jones has yet to eclipse 200 passing yards. And after an excellent Week 1 with a long run, Saquon Barkley came back down to Earth in Week 2 against the Panthers with less than 80 rushing yards.

While I think Cooper Rush will have time in the pocket to spread the ball around, the Cowboys will likely continue to run the ball with Ezekiel Elliott. With each of those five-yard gains, precious time will bleed off of the clock. Mike McCarthy will be very content to play it close to the vest with his backup signal caller.

This game will be ugly. Barring a couple of big splash plays, I anticipate we are in for a long night of boring runs and sacked quarterbacks. I am going to start with the under.

Sticking with the under theme, we are going to double-down on the Barkley under against the Cowboys front. The Dallas defense, in fact, gives up plenty on the ground. That said, with very little to worry about outside, the Cowboys can put a lot of pressure up front in the box and bottle up the Giants’ best playmaker. While Sterling Shepard is a very good wide receiver, he is not striking fear in the heart of opposing defenses. Look for several stacked boxes on early downs with ears pinned back on 3rd and long throughout the evening.

Barkley will get his full complement of work. We are sweating a big gainer against the Dallas front. Let’s take the under.

With a couple of unders already loaded into ParlayIQ, let’s throw a curveball and find an over. Tony Pollard saw seven targets in Week 2. He caught four of them and racked up 55 yards. Pollard remains one of the more explosive players on the Dallas roster; Mike McCarthy must find ways to get the ball in Pollard’s hands more often.

While Zeke is going to tote the ball for 4-5 yards per carry all night, Pollard should see 4-5 targets in the passing game. A well-timed screen should be enough to clear this over.

Finally, the last leg in our parlay is going to go a bit against the grain, hoping to capture some negative correlation for our price. Cooper Rush going over his passing total does not make much sense in a game that goes under.

With that being said, this yardage prop is so, so very low. At some point, the Cowboys will need to get the ball in their playmakers’ hands. The Giants already showed enough gumption to win two close games. If Dallas is indeed a better team, Cooper Rush is going to need to throw the ball to take advantage of the Cowboys’ advantage outside. CeeDee Lamb, Tony Pollard, and a returning Michael Gallup should see enough volume to help Rush beat this number for a second straight week.

So, after looking through projections and utilizing the simulations offered by ParlayIQ, this helpful tool suggests FanDuel should offer +900 for this same game parlay. 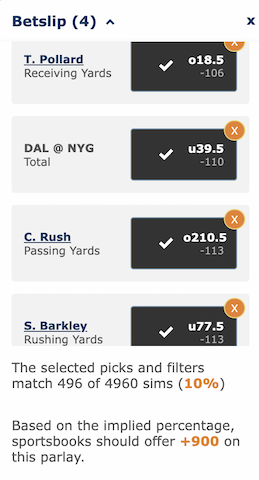 FanDuel Sportsbook gives us a bit of a boost. While the discrepancy is not as large as in our past articles, I am still pretty happy with the built-in boost. 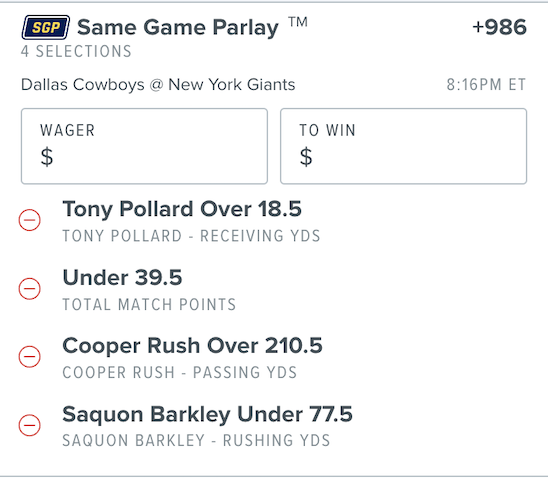 We don’t have monster odds, but I am pretty comfortable with the script we built for tonight’s game. Fire up ParlayIQ and build yourself some correlated same game parlay tickets!