Sometimes we need to think about other ways to win in DFS other than simply playing the best plays. Looking at trends of top lineups is one route to take to do just that. One of the easiest tools to become a better tournament player is studying the trends of lineups that win or nearly win.

I’ve been keeping track of some trends for the DraftKings Millionaire Maker for the first four weeks and wanted to share some of those here in a simple format for you to understand. These are all trends from the top 10 lineups each week.

If you want to follow these yourself with a little excel work, you can create your own trends to follow by either downloading the CSV from DraftKings, or just make it easy on yourself by using ResultsDB here on RotoGrinders to gather information. 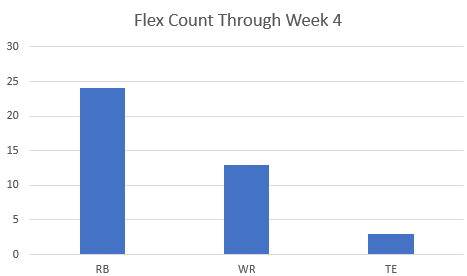 In Week 4 we saw seven RBs in the Flex compared to just three WRs, which further distanced RBs as the preferred flex choice for top 10 lineups on the season. If you use the LineupHQ to make your lineups, we have sliders available that let you choose which positions and what percentages can be allowed into the Flex. 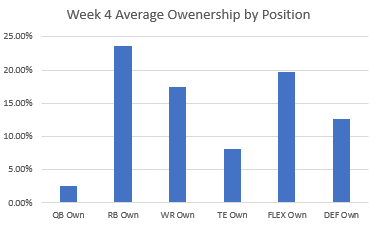 Week 4 saw minuscule AO at the QB position as six lineups used Mitchell Trubisky at 1.5 % and two other lineups used Derek Carr at 1.6%. At the RB position we ventured near the season high of Week 1, which had 26% AO as we saw the chalk hit hard at RB, and that gave us a 23.6% AO at the position for Week 4. The WR position this week easily has the highest AO of the season, as Sterling Shepard at 29.3% and Tyler Boyd at 30.3% both had good enough games for them to enter multiple top 10 lineups. 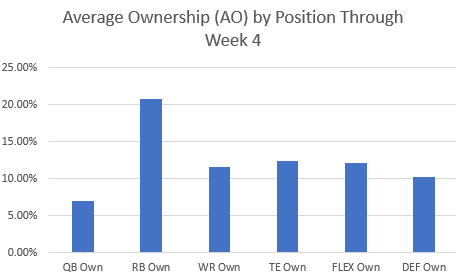 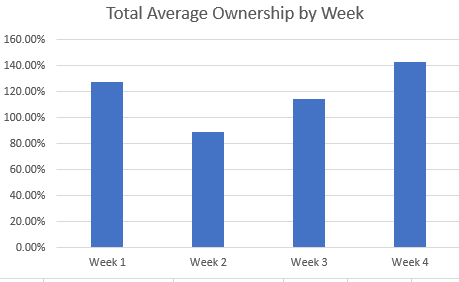 It remains clear that we should not be fading the high touch running backs in our large field GPP teams. Another interesting note is that while QB ownership never rises much above 15%, we have seen very low owned QBs end up in top 10 rosters in three of the four weeks so far. Fitzmagic/Mahomes Week 1, Kirk Cousins Week 2, and Trubisky/Carr Week 4. When you have a low owned QB, you also likely have low owned targets which combined can really move you up the leaderboard if you are right. I would also expect from the second chart that we have hit our season high for Total AO in Week 4 with chalk smashing at RB and WR. 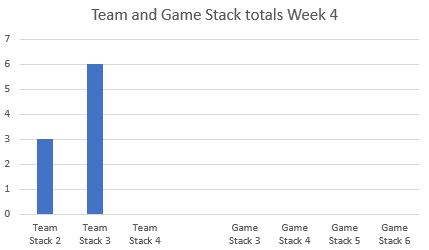 Week 4 saw Game stacks brick, while team stacks reigned supreme for the first time all season. The Buccaneers did nothing against a stout Bears defense this week, which limited those that ran game stacks in that game, while Chubb scored two TDs for the Browns on big plays which ate up the scoring opportunities for Cleveland. It will be interesting in this new era of NFL passing to see where this ends up. I’ll likely run a combination of both team and game stacks every week. 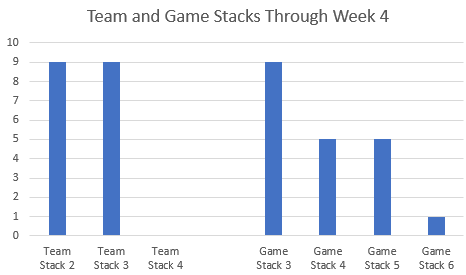 As mentioned above, Team Stacks shut out Game Stacks in Week 4, which now has them almost even on the season with Game Stacks. We have 18 Team Stacks and 20 Game Stacks so far, while only two non-QB stacked teams have hit the top 10 this year. Both of these two teams used a QB without any of their own targets but did run it back with a player opposite in that game. I don’t consider that a stack for my purposes but do think that is relevant to note. 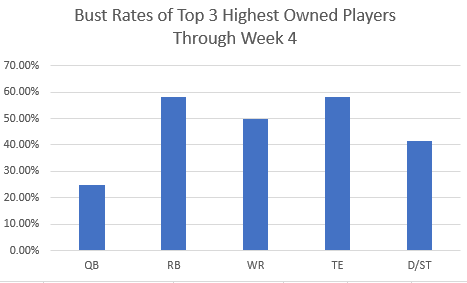 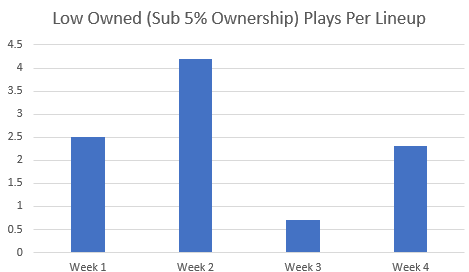 Week 4 saw low owned players bounce back up from Week 3, as we had 2.3 low owned plays per lineup this week. It’s very hard to convince me that you shouldn’t be forcing in at least one low owned play into every single lineup you make in the Milly Maker. This is a rather easy task to accomplish either manually by using our premium extension that displays our projected ownership on DraftKings for you to see as you build live, or by creating a group of low owned players using the groups feature in LineupHQ and forcing at least one of them onto every team.

Other than having a horrific screenname (I mean, seriously…Nickelback?) big congratulations to Nickleback4Lyfe on his $1,000,000 lineup. A two-man team stack takes it down for the first time all season. Three low owned plays with a fourth knocking right on the threshold in Gabriel helped propel him to the top.

Hopefully this can help you look at the way you make your teams in a different light and help you make lineups more correlated with what the top lineups are actually doing.