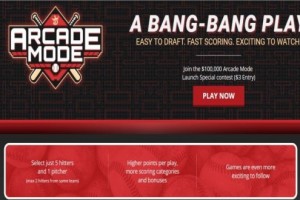 The ever changing world of Daily Fantasy Sports has seen a new game mode introduced by one of the industry leaders, DraftKings.

On Monday the daily fantasy sports provider released a new game called “Arcade Mode”, which will debut Tuesday, May 16th with a $3 buy-in, 20-max entry, $100,000 guaranteed contest for the evening MLB slate (games starting at 7:05 ET through games that start at 8:15 ET).

Arcade Mode will feature a quicker drafting experience, as users will now select just one pitcher and five hitters. There will be no positional requirements for hitters.

In addition the game will be faster paced than the current MLB offerings; it will focus on smaller groups of games rather than the entire slate. DraftKings has also added new statistics and bonuses that will increase the number of scoring instances.

Here are a few of the specifics about Arcade Mode:

— Rosters must include players scheduled to play in at least two different MLB games.
— Rosters must have no more than two hitters from any one team.
— Hitters can not accumulate pitching statistics and pitchers can not accumulate hitting statistics.
— The first hit bonus is applied to any hitter once they record their first hit of a game.
— A home run/stolen base combo is awarded when a hitter records a home run and a stolen base in the same game.

With DraftKings adding numerous bonuses let’s look at those first and see if there is anything we can glean from them (see chart above):

The first thing that stands out is the five-tool players are going to be at a premium. The ability to get that 10 point bonus for the homer/steal combo is going to be huge and you’re going to want to target players who can excel in both categories. Paul Goldschmidt and Mike Trout jump out as top plays almost any time they are in the game and don’t sleep on bats like Jose Altuve, Mookie Betts, and Brian Dozier.

The first hit bonus is also pretty significant so targeting guys with high batting averages also makes a lot of sense. Trout is another standout in this category making him even more of a lock in lineups but we’ll also want to look at batting leaders like Bryce Harper, Jean Segura (who also has stolen base upside), and Freddie Freeman.

Targeting bats, especially those capable of going yard, in projected high-total games is also going to be a key factor with the bonus for home runs set at 15 and an additional bonus for a grand slam of 10 points. A player hitting a home run in their first at bat will get a minimum of 39.5 fantasy points.

Pitching strategy is going to be important as you can only choose one and their impact on your final score will be significant. Bust at SP and you’re likely not going to have any chance at success. Two things stand out in terms of scoring. One, the win bonus is more than doubled from standard mode putting more of an emphasis on pitchers who are significant favorites according to Vegas (or that you project to get the win). There is a subtle decrease int he value of an inning pitched and an increase in the value of a strike out and the penalty for giving up an earned run. Not to overstate the obvious too much but this means we’re going to want to roster SP’s that are significant favorites that are projected to give up minimal runs while having positive strikeout expectation (based on the opposing team strikeout rate). Easy game right?