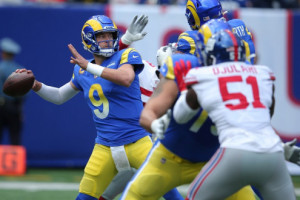 Matthew Stafford – I like Stafford for all the obvious reasons. He’s at home, Calvin Johnson is healthier and the game projects to be a shootout with Dallas. I thought Broyles would be a bigger factor in this offense, but it seems like Kris Durham and Joseph Fauria are bigger factors going forward.

Colin Kaepernick – Kaepernick gets the big European spotlight this week in London. Wembley Stadium is an awesome place to play and the Jaguars are an awesome team to beat up on. I expect Colin to rack up fantasy points in this one.

Other QB I liked:

Eli Manning – I try to let go of personal bias, but I couldn’t stick Eli in this week even though I feel he’s one of the top values on DraftStreet this week. He’s just burned me too many times.

Jamaal Charles – Loading up on top tier RB’s again this week on DraftStreet. You’ll notice that all 4 of these guys are on teams that are heavy favorites and they should get plenty of work. Jamaal would get the MVP award for all non-QB’s this year and he’s matchup proof due to his targets in the passing game.

Lesean McCoy – Lesean should be in for a bounce back game this week. The Giants don’t have any linebackers on defense that come close to Sean Lee’s talent. Vick coming back should help him too; I believe dual threat QB’s help open up running lanes for RB’s.

Eddie Lacy – This is my first week of Eddie Lacy exposure. His matchup, workload, and injuries to teammates were all plus factors in my decision to roster him all over the industry.
Pierre Thomas – Jimmy Graham potentially being out means his production is redistributed elsewhere. I believe at 7k, Pierre has a ton of upside this week vs. the Bills. He should see an increased workload with more screens and carries this week.

Other RB I liked:

Mike James – It was hard to ignore Mike James this week at his bargain price. A lot of good players bit on it and I strongly considered it. Ultimately I didn’t pull the trigger due to the tough matchup with Carolina, and I figured Tampa would abandon the run early. 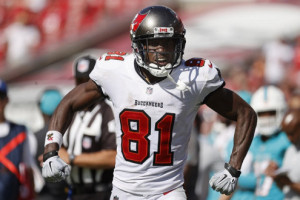 Antonio Brown – The Steelers are 2-0 coming out of their Week 5 bye and I believe they’re a nice sleeper to make the playoffs this year. Antonio Brown is dominating the targets in an offense I expect to do well this week at Oakland.

Michael Floyd – Michael Floyd is quietly on pace for a 75 catch/1000 yard season. Floyd’s lack of TD receptions are the only thing keeping his price down. The Falcons are a plus matchup for WRs and Arizona’s at home this week. Love the value here on Michael Floyd.

Other WR I liked:

Terrance Williams – Miles Austin put up a valiant effort to keep his job as the Cowboy’s 2nd starting WR, but it looks like the transition is complete and Terrance is the man now. He’s a good value at 8k in a likely shootout.

Tim Wright – The Thursday Night game went as expected on my end. I felt Tim Wright was the guy to own on this night, and it was certainly against the grain. I thought Tampa would get behind early, and I thought Wright was Tampa’s 2nd best pass catcher this week with Mike Williams banged up, and Doug Martin out.

Other TE I liked:

Andrew Quarless – Quarless is in a great spot filling in for Jermichael Finley this week, but comments about Bostick cutting into his playing time/targets made me shy away from him for now.

Packers – I liked the Packers D this week when I saw they were only 3k and going against the Vikings. I loved the Packers D when I found out that Adrian Peterson’s been nursing an injury these past few weeks.

Other DEF I considered:

49ers – If the Packers weren’t such a great value this week at 3k, I would’ve ponied up for the 49ers defense this week. Jaguars starting QB’s combine for 3 TD’s and 12 INT’s on the season. Yikes.