MLB DFS: Where Do Home Runs Come From?

This article was written three years ago, using stats from 2012-2014. Some trends in the game and stats we have available to analyze things have changed since then, but very little has changed in terms of the basic analysis of looking for home runs. It is still a simple, yet accurate thing to say that home runs come from balls hit hard and in the air. In 2014 we had high strikeout sluggers like Chris Carter, today we have Joey Gallo. In 2014, we had Miguel Cabrera at his peak, today we can look at Nolan Arenado with a similar stat line in terms of contact and power.

In today’s landscape, we can add statcast data to the mix, looking at launch angle and exit velocity alongside fly ball rate and hard hit rate. But the gist remains the same. You are not going to get a home run from a hard hit ground ball or a soft hit fly ball. And we can still find outliers and profit potential in DFS salary from players who have simply hit a short term slump stemming from plain old bad luck in HR/FB%. With power at a higher level than it was in 2014, it is even more crucial to have power in our lineups. What is power? It’s not a number of home runs, it’s a skill of hitting the ball hard and hitting the ball in the air. 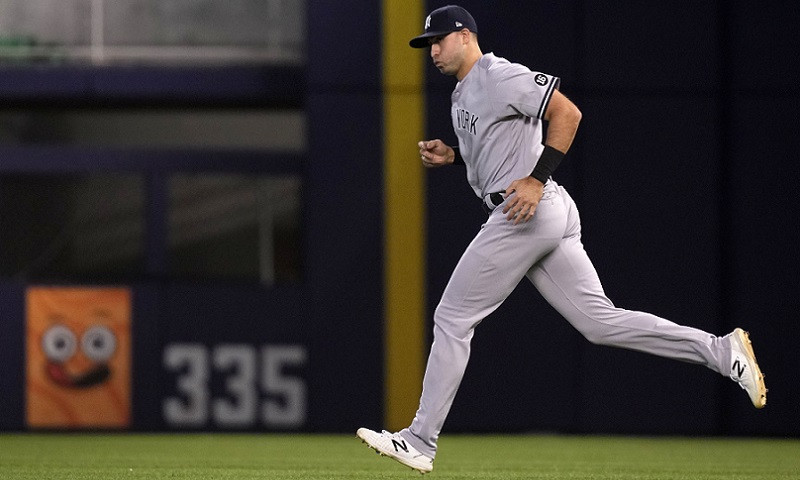 These are the league average baselines for where these stats have trended over the past few seasons. You will see that strikeouts and home runs trended up steadily each season until 2017. In 2018, the strikeouts took another step up, while power went back to the 2016 level.

Outside of starting pitcher, the place to find the most points on a daily basis is home runs. You will almost never see a tournament winning team without several home runs, and more often than not, a multiple home run hitter. So, where do home runs come from? Simply put, home runs come from fly balls, and specifically, fly balls that are hit far. That’s great analysis right there! I’m going to break down some stat lines for a couple well known power hitters and show you what metrics I look at to understand their power potential. At the bottom of this article is a brief description of the stats I’m going to look at and what they mean.

You can break down power hitters into two different groups – good hitters who hit HR, and bad hitters who hit HR. Of course there’s a lot of gray area in those extremely simple groups, but essentially, good all-around hitters who hit for power are the players you want to target in every type of DFS contest you play on sites like FanDuel. A guy like Miguel Cabrera is a cash game play anytime he has a favorable matchup, and a tournament play even in a difficult matchup. On the flip side, a player like Chris Carter is never a play in a cash game, regardless of matchup, but is a tournament play in any matchup. With well-known players like Cabrera and Carter, everyone knows what type of hitters they are, but let’s take a look deeper into their stats to see what makes them who they are, and how we can use that data to find other players that may be less obvious. Here are the 3-year averages in some basic, yet crucial stats;

What you should notice from the above numbers between Cabrera and Carter is that they are essentially even in power, but Cabrera is light years ahead as an overall hitter. The power numbers; ISO, HR/FB% and AB/HR are very close, slightly in favor of Carter. The main difference between these two is their strikeout rate. Cabrera has an elite strikeout rate for a power hitter while Carter’s is close to as bad as you will see for a major league hitter. That huge gap in contact is what makes Cabrera’s average over 100 points higher and puts him in play every single day in DFS, as he has a lot of ways to help you. The other number that is a significant difference is the number of fly balls as opposed to ground balls. Fly balls are good for home runs, but when they don’t clear the fence, they most often end in an out. So, a player with more ground balls and line drives will have a higher batting average. But, what I really want you to see here is that if all you want is a home run, Chris Carter is better than Miguel Cabrera. (Don’t quote me on that!)

Many of you are probably already a step ahead of me that for DFS, all these numbers need to be broken down by handedness and opposing pitcher quality, then opposing pitcher GB/FB% and then adding in ballpark factors and weather. Yes, it is a never ending rabbit hole of stats, but you need to start somewhere. Let’s take the next step with Cabrera and Carter and look at their splits vs RHP and LHP.

This points out some interesting things on Cabrera. First of all, he is simply an elite hitter against everybody, but from this splits data, I would say he looks more like a cash game play against LHP and a tournament play against RHP. Do you see why I would say that? Against lefties, he walks an incredible amount (probably because they are, and should be afraid of him), and he hits more ground balls and line drives, giving him a higher on-base percentage. Against righties, he has a much better AB/HR ratio, due to hitting more fly balls. Cabrera does not have huge differences in his splits like some other batters, but it is always worth looking at splits and trying to find any advantage you can. Let’s see what Carter shows us;

Much like Cabrera, we do not see a wide difference in Carter’s splits. Simply put, he is just about equally likely to strike out against any pitcher, and if he’s lucky enough to touch the ball, it is going to go a long way. To make sure you see why we take the time to look at splits, let’s check out another well-known power hitter, Brandon Moss;

Now those are some splits! This is why we look at this stuff. I chose Moss because he well known as a start against right-handed pitchers and a sit against lefties. But, hopefully you can see why from these numbers and start to figure out how to spot targets with these stats. The ISO alone would be enough to tell you to target Moss against RHP, but what is most interesting to me is why? It’s the fly ball rate that jumps off the page, and going back to my original, simplistic statement – home runs come from fly balls. His HR/FB% is not too far off between RHP and LHP, but they can’t become homers until they go in the air.

Let’s look at the difference between Moss and Carter and how we can use that in DFS. As we discussed earlier, Carter is clearly never going to be a cash game play, he just doesn’t hit the ball enough. But, he hits home runs against both RHP and LHP at an elite level. He is a threat to go deep every time he steps up to the plate, making him a great GPP option if you’re looking for that all or nothing multi-homer threat. Moss on the other hand is not a terrible against RHP, but he’s completely untouchable against LHP. On certain days, depending on salary and matchup, he could be a cash game play against RHP, and he is always a potential tournament play against any RHP.

If you want to have some more fun with power hitter splits, go look at these players; Adam Lind, Wilin Rosario, Ike Davis.

As we get further into the season and begin to get a larger sample size of at bats, the first thing I am going to be looking for to target power hitters for DFS is a discrepancy in their HR/FB%. HR/FB% is the most luck-based stat in this list. What I mean by luck based, is if a hitter is making a similar amount of contact and similar GB/LD/FB to their historical numbers, their HR/FB% is likely to end up near their career norm, but it doesn’t always happen in a linear manner. When a salary starts to drop for a proven power hitter because they are not hitting home runs, if it is simply a matter of an artificially low HR/FB%, then you have a situation to take advantage of.

Strikeout Rate – Percentage of times a batter strikes out, the less the better. Power hitters have higher strikeout rates than other players, and league average strikeout rate is around 20%.

Walk Rate – Percentage of time a batter walks, this shows good control of the strike zone. League average is around 8%. Important to note; walks give you points in DFS.

ISO – Isolated Power. ISO measures the amount of extra base hits a batter has, giving no credit for singles. The formula is
Extra Bases / At Bats. ISO is better for looking at what a player has done; I do not use it as a predictive stat. League average is around .140, over .200 is great.

HR/FB% – The ratio of home runs per fly ball. This is very important to understand about HR/FB%. For pitchers, every major league pitcher regardless of talent will end up close to the league average 10% HR/FB over time. For hitters, there is not a standard baseline, power hitters have higher HR/FB% and set their own baselines over time. League average for hitters is around 10%, anything over 15% is good, and 20% is great.