Avisail Garcia (+.5) vs Christian Walker: Total Runs/RBIs: This prop is really more about matchup than anything. Walker and Garcia have somewhat similar numbers and are both playing in a pitcher’s ballpark, so this all comes down to matchup. Snell is one of the best pitchers in the league, while Kelly is definitely not. As of right now, the D-Backs currently have a 3.03 implied team total, compared to the Rays, who have a number of 4.47. The most likely scenario for Walker is zero runs/RBIs, and about 40% of the time, Garcia will get one or more. Take Garcia here and move on.

Tommy Pham (+.5) vs David Peralta: Total Bases: I’m not going to try and argue that Pham is the better hitter here, but he’s clearly in the better spot. Peralta has lackluster numbers vs. LHP since the beginning of last year, owning a .309 wOBA and .160 ISO, while Snell is giving up and incredible .099 ISO and .199 wOBA to opposing lefties. The chances are very good that Peralta will not get a hit here, and with Pham owning the tiebreaker and having a wOBA 60 points higher against a much worse pitcher, he wins this prop 80% of the time. Back Pham.

Ji-Man Choi vs Eduardo Escobar (+.5): Total Bases: I’m generally not a fan of taking a guy who is giving up the tiebreaker, but Choi is in the much better spot. Choi owns a .381 wOBA since the beginning of last year vs RHP, while Escobar owns a .371 wOBA vs LHP and is facing Snell. The likely spot here is Choi gets a hit and Escobar doesn’t, but it isn’t a lock like the other two questions in this prop. 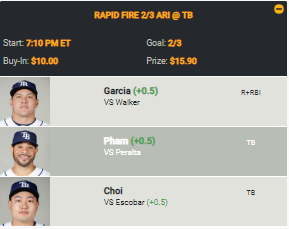 (Update: Peralta is not in the starting lineup. A new prop is listed below) 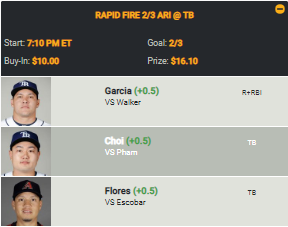 Jhoulys Chacin (+4.5) vs Max Scherzer: Total Strikeouts: There is one area where both Scherzer and Chacin struggle with, and that’s against left-handed bats. This happens to be a spot where Chacin will not be facing many lefties and Scherzer will likely be facing entirely lefties. Additionally, Chacin will be facing a high strikeout line and Scherzer will likely be facing a low strikeout lineup. In all honesty, it’s not going to surprise me if Chacin has the same number of strikeouts as Scherzer, so getting 4.5 makes him an absolute lock in this prop.

Victor Robles (+.5) vs Christian Yelich: Total Runs/RBIs: Yelich is the better hitter here and anyone who would question that is someone who should not be playing DFS, but the total for his game is around seven and the likely outcome is that Yelich ends with no run/RBI. Robles is possibly the best hitter in this lineup and has the most likely shot at scoring here or hitting a guy it. Take the guy with the tiebreaker when the most likely outcome is zero.

Ryan Braun (+.5) vs Travis Shaw: Total Bases: This one here is a toss-up. Shaw has the platoon split and Braun does have a .325 wOBA vs RHP, compared to Shaw’s .366 wOBA, but Braun has the tiebreaker here. Scherzer has good enough stuff where he will likely end up not allowing a hit to either batter, and Braun owns the tiebreaker. Just take Braun and move on. 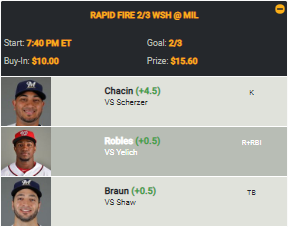 Wil Myers (+.5) vs Manny Machado: Total Runs/RBIs: Both these guys get a matchup against deGrom, and the Padres own a low 3.17 implied team total. It’s not going to surprise me if the Padres end up getting shut out here. deGrom owns a 2.72 xFIP since the beginning of last year, and the most likely scenario is that neither of these hitters ends with a run/RBI. Just take the slightly worse batter in Myers, who owns the tiebreaker.

Eric Hosmer (.5) vs Austin Hedges: Total Bases: This prop is super simple. Hosmer owns a wOBA 60 points higher than Hedges vs RHP, is getting the tiebreaker, and will be batting higher in the lineup. Neither hitter is likely to get a hit here. Hosmer is an absolute lock and you don’t need to think twice about it. 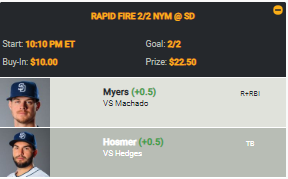