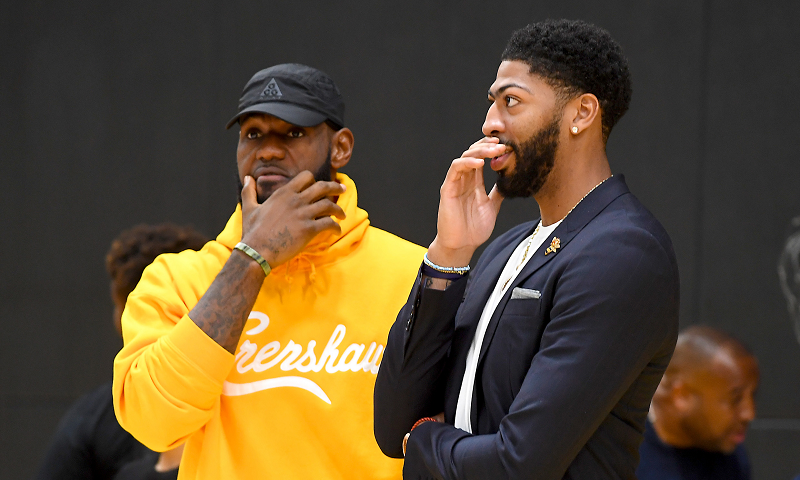 Using past NBA MVP Award winners to predict how future votes will go, two things become apparent. First, the eventual MVP has to play on a winning team. Not just any winning team though. Typically, the MVP comes from one of the best teams in the league. Nine of the last 10 MVP winners have been either the No. 1 or No. 2 seed in their respective conferences. In fact, since 1985, only two MVPs have come from a team that finished worse than second in its conference during the regular season. One of those exceptions being Russell Westbrook in 2016-17.

A year after Durant’s departure to Golden State, the Oklahoma City Thunder fell from No. 3 to No. 6 in the West. It was a modest fall given the circumstances. The Thunder were without the franchise’s first NBA MVP (Seattle Supersonics included), after all. But the most significant factor in Westbrook’s MVP claim was his historic numbers. That year, Westbrook became only the second player in NBA history to average a triple-double for an entire season (the first since Oscar Robertson in 1961-62). The feat helped Westbrook edge out former (and future) teammate James Harden in NBA MVP voting despite the Houston Rockets earning eight more wins than Oklahoma City in the regular season.

While Oklahoma City failed to earn home-court advantage for the first round of the playoffs, much less finish at the top of the conference, Westbrook met the second criteria MVP voters look for: Scoring and efficiency.

Four of the last six winners have led the league in scoring, and in this case, Curry in 2015-16 and most recently Giannis Antekokounmpo were the exceptions, not Westbrook.

In addition to leading the league with 31.6 ppg in ’16-17, Westbrook was also at the top of Player Efficiency Rating (PER), a relatively new all-in-one advanced metric, developed by Memphis Grizzlies’ executive John Hollinger to boil down the entirety of a player’s contributions into one number.

Among the last 10 NBA MVPs, eight have had the highest Player Efficiency Rating in the NBA. This season’s MVP, Antekoukounmpo, trailed Harden by more than 8 ppg but he made it the fourth consecutive year that an MVP winner was No. 1 in PER.

Long story short, when scouting NBA MVP odds, it’s best to bet on guys who are on potential conference championship contenders and players who will at least come close to leading the league in scoring and PER. 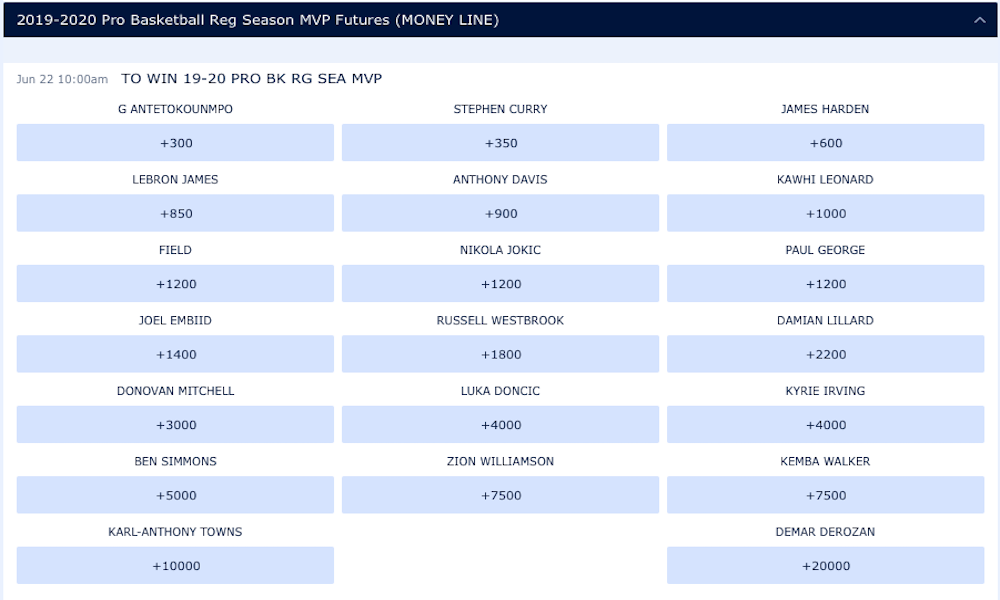 To no one’s surprise, the new Los Angeles superstars make up four of the top eight 2019-20 NBA futures MVP betting favorites. There’s no question that LeBron James, Kawhi Leonard and Anthony Davis are arguably the three best players in the NBA, but the best player doesn’t always win MVP. The new Hollywood stars are unlikely to win the award this season, leaving plenty of value in the NBA Futures MVP market.

One factor yet to be discussed is how many games are required to win the MVP. With the caveat of shortened seasons from player strikes ( ’97-98 and ’11-12), the NBA MVP hasn’t played less than 71 games in a season since Bill Walton won playing 58 games in 1977-78. Only two MVP winners — Antetokounmpo and Harden — have played less than 76 games since 2001. That doesn’t bode well for the Los Angeles duos.

LeBron James +850 is vying for his fifth NBA MVP Award to join Michael Jordan, Bill Russell and Kareem Abdul-Jabbar as the NBA’s only five-time NBA MVP winners, but it’s unclear how much vying James will actually do. James only played 55 games last season, in part due to injuries and largely because the Lakers were eliminated from playoff contention by mid-March. Sure, James would love to join Jordan and Malone as the only 34-year-old NBA MVP winners (James turns 35 in December), but James is no longer playing for MVPs. He’s playing for titles.

The Lakers won’t be eliminated from playoff contention this season, leading many to believe the most motivated regular-season version of James will be on display. I don’t doubt James will be motivated, but choosing his battles and saving himself for the postseason in the final stretch of his career gives James and the Lakers the best shot to add to their trophy case. And thanks to Leonard’s and George’s arrival to the city, James may be less-incentivized to play day-in and day-out than people realize.

With the Clippers as the new Western Conference favorites, the value of the No. 1 seed in the West is actually cheapened. The Lakers and Clippers share the roof of the Staples Center throughout the season. Odds are, the road to the NBA Finals runs through Staples Center come playoff time even if not from the Lakers’ doing.

The acquisition of Anthony Davis +900 provides a security blanket on nights James needs to take off, too. But like James, Davis is unlikely to play enough games to win over MVP voters. Riddled with injuries, Davis has played more than 68 games only twice in his seven-year career. Expect the Lakers to take a similarly conservative approach with Davis, as the purple and gold preserve gas for the postseason.

For the same reasons, NBA MVP bettors should be hesitant to back Leonard +1000. Leonard played only nine games in 2017-18 and left the San Antonio Spurs after losing trust in the Spurs coaching staff. Leonard didn’t suffer any severe injuries in Toronto, but he still sat out 22 games before leading the Raptors to their first NBA Championship and earning his second Finals MVP. It’s cliche, but Leonard is on record for caring only about winning.

“I don’t care about being the best player. I want to be the best team,” Leonard told reporters in May.

I believe him. You can bet that the Clippers assured him freedom in handling his minutes and injuries before Leonard made the move West.

Now that Leonard is in Los Angeles, the Milwaukee Bucks are favorites to win the Eastern Conference. It’d shock no one if Antetokounmpo defended his 2018-19 MVP title. What’s scary is to think Antetokounmpo has plenty of room to improve even after an MVP-winning season. The Greek Freak won his first MVP with little to show for a jump shot. If he can come back from the offseason with a half-way formidable jumper, Antetokounmpo will likely stay atop his throne.

I won’t argue with anyone banking on back-to-back NBA MVPs for the Antetokounmpo but I prefer betting Curry +550 and George +1300. (use our FanDuel Sportsbook promo code to get these odds).

Curry takes on an increased workload for Golden State as Klay Thompson recovers from a torn ACL and Kevin Durant recovers from his torn Achilles in Brooklyn. Perhaps the greatest shooter of all time, we witnessed exactly what Curry could do without his supporting cast in Games 2 and 3 of the NBA Finals. The Warriors didn’t win, but the two-time MVP winner dropped 47 points on 14-of-31 shooting, 7 assists and grabbed 8 rebounds in the Game 3 loss as Toronto resorted to a box-and-one defense to slow down the prolific scorer.

Curry isn’t immune to injuries or taking rest, but he’ll have to push is body to the limit as the Warriors bide time with Thompson sidelined. We could see something very similar to Westbrook’s ’16-17 MVP season, where the Warriors finish around the middle of the pack in Western Conference playoff seeding while Curry puts up historical numbers that are simply too big to ignore.

In 2019, Harden was the NBA MVP runner-up for the third time in his career. Out of the current super-duos, Harden and the Westbrook are the only pair to both win NBA MVP awards and NBA scoring titles. Now, is there enough ball to go around for Harden to win his second NBA MVP?

Westbrook posted the highest usage rate (41.7 percent) in NBA history during his MVP season. The following year, Harden posted the second-highest recorded usage rate (40.5 percent) in NBA history. As The Ringer’s Zach Kram points out, Westbrook’s career-usage ranks behind only Michael Jordan, and Harden’s usage is higher than Westbook’s if you count only his time in Houston.

Harden isn’t my favorite bet, but don’t let Westbrook scare you too much. Durant won the MVP alongside Westbrook in 2014 and George just had the best individual season of his career averaging 28 points, 8.2 rebounds with a 29.5 usage percentage, only slightly behind Westbrook’s 30.9 usage — Westbrook’s lowest since 2010-11. At one point during the season, George was a favorite in the NBA MVP race before a nagging shoulder injury slowed him down. George finished third in NBA MVP voting. When Durant won MVP, Westbrook posted a 34.4 usage percentage while Durant’s was 33.0. Friends for 20 years, Westbrook and Harden are more than comfortable with each other, so I don’t expect Westbrook’s personality to stand in Harden’s way.

Speaking of George, George will have plenty of chances to lead the Clippers as Leonard makes a habit of treating the regular season with caution. The one concern is George’s shoulder injury. George is expected to miss the start of training camp after undergoing surgery on both rotator cuffs this summer. At +1300, George is a solid bet if he returns 100 percent, but don’t jump the gun. Wait to see where his health stands as we get closer to the season. Barring bad news, his NBA MVP odds are unlikely to fluctuate much before then.