Welcome to another Monday edition of the Starting Five. We have a really fun six-game slate and most importantly we have a later 8 PM ET start, so remember you have that extra hour to work with when building lineups.

With this being a six-game slate, there is going to be a fair amount of chalk today, but I want to turn your attention to a pivot at every position. Not every one of these guys will go off (if they did I would be in the Magic 8-Ball business) but rather are names you could use to give yourself a different lineup construction than the field. All prices/stats are focused on DraftKings.

With multiple elite guards in play and Rajon Rondo priced right below Kris Dunn, this is a spot where Dunn could potentially go underowned. Yes, his matchup against Boston isn’t the best, but PGs have had the easiest time scoring against Boston, and Dunn’s usage rate has been elite. He has a 26.4% usage rate and is averaging 1.07 DK points per minute with Chicago. While this game will likely be slower, Dunn also could be in line for more usage with Holiday, Valentine and Lauri having tough matchups. There is no doubt there is risk here, but as we saw over the weekend, if Dunn gets hot no one can stop him. Getting 45-50 points at a $6K price tag is always in play here.

UPDATE: Kyrie Irving has been ruled out and Al Horford is questionable, which makes this an even more competitive spot (might even play slightly faster), so I like Dunn even more. That said, Terry Rozier ($4,100) will also be one of the chalk value plays on the day. 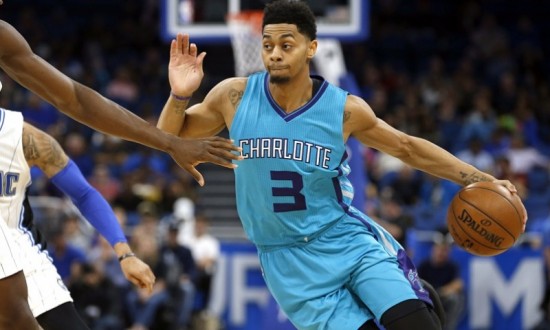 Lamb was questionable heading into this morning, but it’s already been announced that we will play tonight and that Nicolas Batum will be out. Lamb has done quite well without Batum in the lineup, sporting a 25.3% usage rate (.5% bump) and a 1 DK point per minute average. With him having the ability to play 30-34 points in this pace-up spot, there is a lot of upside at this $5K price tag. I will like this spot even more if Andre Roberson, who is questionable, gets ruled out.

A couple other punt guards that could be interesting include Eric Gordon, who has the hot shooting game coming at some point, and Alex Abrines if Roberson and/or George are ruled out.

I could see a road in which Gallinari is chalk before lock (I think he should be), but in case he isn’t I’m going to spell out the case here. Gallinari has been working his way back from the glute injury, but last time out looked like vintage Gallinari, playing 34 minutes and taking 19 shots. This year, with Blake Griffin off the floor, Gallinari has had a 25.2% usage rate. If you are telling me I can find a player getting that much usage who will get a good amount of his minutes playing the stretch four against Ibaka, I like his upside on the offensive side. Foul trouble could be an issue if he gets too aggressive against Ibaka, but Gallinari is a guy who can put up 35-40 fantasy points at around a $5K price tag, so I have GPP interest.

Forward is a very weak position today and I don’t feel great about any of the options, but I’m going to take advantage of James Johnson, as he’s entered the starting lineup the last two games and played well in both (the Spurs game was a blowout). Johnson should draw a favorable matchup against JaMychal Green, one that should allow him to get a good number of rebounds, so if he can get his way to 13-15 points a double double isn’t out of the question. Note: If Roberson is out, Jerami Grant at $3,700 could be the guy to fill in; he isn’t sexy, but he can get you fantasy points in all the categories.

With no Marcus Morris, look for the Celtics to start big to avoid Al Horford (if he plays) having to guard Lopez. Lopez is one of the worst rebounding centers in the NBA, so although this isn’t a spot in which Baynes will play 30+ minutes (although not impossible versus this big team and no Morris), he can go for 10-10 in 20-22 minutes. If value becomes hard to find, Baynes is a solid punt that will be under 1% owned.

UPDATE: Well, Kyrie is out and Horford is questionable with that injury sustained yesterday. I suspect he sits, which means that Baynes would be in line for 24-28 minutes, and that would make him mega chalk. I also don’t mind a GPP dart throw on Daniel Theis (if Horford out obviously), who has played well off the bench but hasn’t put the good all-around game yet. He will be under 5% owned and has the ability to score in the mid-20s in terms of DK points if he makes a few threes. To reiterate, Robin Lopez is still one of the worst rebounding centers in the league.

As always, leave comments and thoughts in the comments. Good luck everyone!