Welcome to another Monday edition of the Starting Five. We have a really fun seven-game slate with the normal 7 PM ET start, so don’t think you have extra time to build lineups tonight!

With this being a seven-game slate, there is going to be a fair amount of chalk today, but I want to turn your attention to a pivot at every position. Not every one of these guys will go off (if they did I would be in the Magic 8-Ball business) but rather are names you could use to give yourself a different lineup construction than the field. All prices/stats are focused on DraftKings.

With Darren Collison and Victor Oladipo both questionable for tonight’s game against the Wizards, there are potentially a lot of extra minutes to go around at the guard slots. Cory Joseph is a good play and will be the chalk option if only one of them sits, but if both guys are out, I like Young as a pivot. On his floor time with Joseph, he’s a measly 0.63 DK points per minute player, but when Young gets the keys to himself, he’s been really good in a limited sample, posting a 1.1 DK point per minute average as the only PG on the floor. On a slate with some nice players to pay up for, Young could be a potential cost-saving option that will be lower owned than he should be.

Other Options: Cory Joseph ($3,700) will be the chalk option if one of Collison or Oladipo sits. Jrue Holiday has an insane usage rate with no DeMarcus Cousins on the floor, and for $7,200 I’m willing to give him a shot in GPPs. When Jerian Grant doesn’t get benched, he’s getting 33-37 minutes a night, and against the Kings, he provides solid value for only $5,400.

There a ton of big name shooting guards in good spots (Bradley Beal, Lou Williams, CJ McCollum, etc.), so LaVine might go overlooked due to his $6.6K price, with people assuming he’s still on his minutes limit. But, LaVine played 31 minutes on Saturday, so it appears the limit is now in the 30s, which means he has GPP-winning upside now. If this LaVine game had happened on a weekday, people would have noticed and caught on, but with the performance coming on the Saturday before the Super Bowl, it might have slipped through the cracks, and he draws a great matchup against the Kings.

Other Options: Jamal Murray has just shown up on the injury report, so Gary Harris ($6,300) and Will Barton ($6,200) will be very popular and are both solid plays. Wesley Matthews ($5,300) is also a nice safe option in a pace-up spot against the Clippers.

With John Wall out, Markieff is one of the big winners, with a 2% usage bump , and he gets a great matchup against the Pacers. Thaddeus Young isn’t mobile enough to cover the three-point line. As with any player you project to have a great three-point matchup, there is variance if he misses his shot, but if he makes a few shots he could be a sneaky guy who has mid-40 point upside.

Other Options: All of the shooting guards above other than Gary Harris have small forward eligibility and are good options at the SF position as well. If Napier and Turner sit for Portland, it will be hard to ignore Maurice Harkless ($3,100) picking all of those minutes.

Portland has struggled against power forwards all season, and Griffin had a dominant performance against them earlier in the year, putting up 44 DK points. He hasn’t been very popular since the trade, but we’ve already seen him have the ball in his hands more the last couple games than he did with the Clippers, which gives him the ability to contribute in multiple categories. I’m not saying Griffin is going to triple-double tonight, but I do think he gets 5-6 assists, which can be the difference between a good and great DFS performance.

Other Options: My love for Nikola Mirotic has no bounds in this Pelicans offense. I’m going to be rostering him at $5,800 tonight and won’t stop until he gets over $7K. If Whiteside ends up sitting, James Johnson ($5,400) and Kelly Olynyk ($5,200) are great options, though they will be popular. If you are looking for a low-owned option, this is a great Dirk Nowitzki ($4,900) spot. 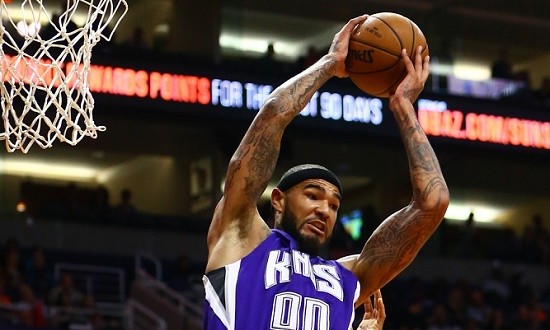 I think people will balk at this price for WCS, but matchups don’t get better than this for centers. WCS has been playing in the low 30s consistently the last couple weeks, which helps raise the floor a bit (just know it’s Sacramento, so anything can happen at any time), and earlier this season against the Bulls he put up 28.75 DK points in only 23 minutes. I think WCS will be really involved in the offense tonight, and there is added block upside when facing the Bulls. I don’t think a 20-15 type game is out of the question here, and he should be low owned because people will balk at the near $7K price tag for him.

Other Options: Bobby Portis ($6,200) will be a very popular PF option, but you can make your lineup a bit unique if you slide him over to the C spot and play an extra forward. Kelly Olynyk also has center eligibility and makes for a good option here as well if Whiteside sits. Kosta Koufos has lost his minutes with the return of WCS, but if Zach Randolph sits, he quickly could become an elite play at $4.4K.

Thanks everyone for reading. Feel free to leave comments below. And congrats to all the Eagles fans out there — what a game!