NOTE: The numbers below reflect an average of defensive fantasy points from the start of the 2014 season through Week 16 2016. Top plays and secondary plays only started in Week 7 2016 as a way to breakout defense that fit the criteria into two separate categories.

Defenses that Fit the Criteria (At Home, Favored and Opponent Team Total of 21 points or less)

I am not going to list any top plays this week as I think Week 17 is a little different as it is sometimes tough to figure out which teams will play their starters, which teams are motivated, etc. So I will just highlight all the defenses that fit the criteria with the usual commentary provided. 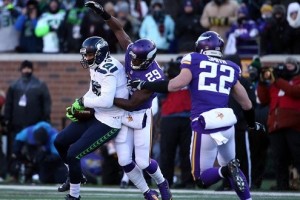 The Vikings defense was strong early in the season, but despite their more recent struggles, they still rank second in total defense and eighth in scoring defense, while recording the fourth most sacks and 12th most takeaways. The Bears provide a good matchup this week as they have lost 6 of their last 7 and 9 of their last 11. Matt Barkley has also been very turnover prone throwing eight interceptions in the last two weeks, and 12 total in his 6 games this season. The Vikings are a good GPP target this week and can be looked to in cash games as well.

There is not a lot of stats I can point out here that would matter. This really comes down to whether or not the Giants play this like a normal game with their starters playing the whole game, or if they end up resting some of their offensive starters, specifically Eli and Odell, for at least some of the game. Right now, Ben McAdoo has said he is playing his starters. The Vegas lines seems to say otherwise though as the Redskins are seven point favorites here. The Redskins are a gamble here but might make an interesting contrarian GPP play if the Giants go to Ryan Nassib and other backups early.

This is another tough situation as the Steelers are expected to rest some key starters, although so far it seems like most of those guys are on offense. Even so, the Browns are a great matchup for any defense. They have given up a ridiculous 62 sacks this year, which is 19 more than any other team. The Steelers had eight sacks in their last meeting against Cleveland. Again, the Steelers are a GPP play due to the risk of resting starters and not being motivated, but their opponent provides plenty of upside, and Vegas still lists the Steelers as six point favorites.

The Week 17 theme continues here as the Houston Texans are locked into the 4 seed in the AFC and have nothing to play for here. I expect Houston to continue to give Tom Savage reps here and likely play most of their starters for a while. But again, they have little motivation here other than to get their first team offense (likely still without Lamar Miller) some reps. The Titans defense has been fairly average this year, but Vegas has the Houston team total at only 18.5, so the Titans make another GPP option this week.

The Denver defense certainly has not been as strong as last year but they still rank sixth in total defense, sixth in scoring defense, third in sacks, and ninth in takeaways. You can throw out most of the Raiders offensive numbers here, especially their fantasy points allowed to opposing defenses, since they are forced to start Matt McGloin here after the unfortunate injury to Derek Carr. I expect the Raiders to run it a lot here, but the Broncos will not be scared of McGloin. If they can force him to throw, he is the owner of an 11 TD to 11 INT ration in his career. Once again, the Broncos are a GPP play this week.

Overall the Eagles defense has been up and down this season, but they have actually been pretty good at home. They have allowed just under 16 points per game this season at home. They have also created 24 turnovers, which is top ten in the NFL. But the big reason to target the Eagles this week is that the Cowboys have already wrapped up the number one seed in the NFC. So they have nothing to play for here, and even though Jerry Jones has said the starters will play, I’d be surprised if they play a lot here. It sounds like Tony Romo also will not play which means we get to possibly pick on Mark Sanchez here. The Eagles make a strong GPP play this week at a cheap price, although there is risk if the Cowboys starters play significant time.

EDIT TO ADD: It sounds like Dak Prescott will start, Tony Romo will play, and then give way to Sanchez. Dallas is basically going to play this like their first or second preseason game.

Other Defenses to Target

I think there are several other good options this week that do not fit the criteria. I already mentioned several teams above, all of which I think are good GPP plays. Week 17 is a tough week to figure out in some cases as we do not always know exactly how long starters will play or how motivated teams will be. I think there is definitely merit to using New England (at Miami), Seattle (at San Francisco), Arizona (at Los Angeles), and even Kansas City (at San Diego). You may see all of those teams listed as top five options this week. I am not going to make any of them an official pick this week, but think they all are strong plays. Again, for me, Week 17 is likely going to mostly be a GPP week, even though I am sure there is value to playing cash games as some people may not monitor situations/playing time closely.