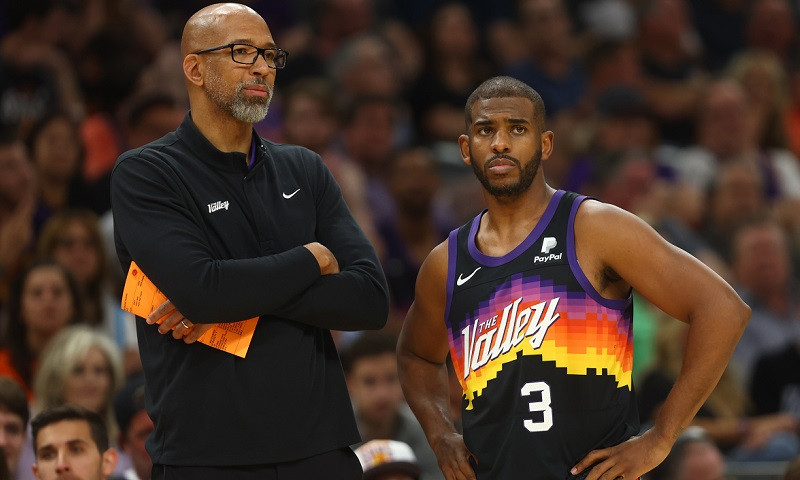 The Phoenix Suns are going into Game 2 against the Denver Nuggets with incredible momentum, after dismantling MVP favorite Nikola Jokic and his squad in a 122-105 comeback win. After trailing by as much as nine points in the third quarter, the Suns flipped the script with a 37-12 run, and in turn ran away with the win. Now the Suns are -6 at online sportsbooks, and I can’t imagine picking against them.

Early in Game 1, the Suns played great team basketball—highlighted, of course, by their young core of Devin Booker, Deandre Ayton, and Mikal Bridges. But from the jump, Jokic was giving Phoenix too much to handle. Seemingly every trip up and down the court, Kevin Harlan was uttering Jokic’s name.

Jokic uses his body to seal defenders on an entry pass. Jokic works the pick-and-roll game with Facundo Campazzo. Jokic gets a piece of Jae Crowder’s three-point attempt and starts a fast break.

Miss me with the narrative that Jokic is out of shape. That’s such a 2020 take. Jokic is conditioned for the long haul in short-rotation playoff games—and for what looks to be a long stretch of postseason hoops for Denver.

But don’t think Phoenix is laying down in front of the Sultan of Serbia. The feisty Suns battled back to finish the first frame in a 28-28 deadlock, thanks to an electric pace, tremendous ball movement, and some clutch three-point shooting.

Jae Crowder’s and-one from long-distance late in the first quarter, in particular, epitomized the fight this home squad possesses. The Suns can take a licking, but they keep on ticking—and you’d better be prepared to go 12 rounds if you want to be standing at the final buzzer. That was proven time and again in Game 1—when they rallied behind an 11-4 second-quarter run, when they overcame a nine-point third-quarter deficit, and when they eventually went on an unfathomable 37-12 scoring run to close out the game.

The main discussion in this series will almost always center around MVP candidates Jokic and Phoenix’s Chris Paul, as well as the scoring ability of young stars like Denver’s “(player-popup #michael-porter-jr)Michael Porter Jr and Phoenix’s Devin Booker. Jokic’s combination of size, strength, playmaking, and accuracy make him a walking triple-double threat, and a defensive nightmare for any opponent. CP3 remains a wizard with the ball, and one of the most valuable (yet criminally underrated) impact players in NBA history. MPJ has blossomed into a lethal scorer, with a 6-foot-10 frame and the skills and athleticism to dominate both inside and outside. Booker might be the best pure scoring guard under 25 not named Luka Doncic.

But both these squads also have the x-factors needed to succeed in a daunting postseason run.

Crowder has ice in his veins at the biggest moments. Ayton can influence the game on both ends of the floor when he’s locked in. Mikal Bridges might be one of the best three-and-D guys in the NBA. Cameron Payne provides a huge scoring presence—as well as a burst of energy— whenever he checks into the game. Even veterans Dario Saric and Torrey Craig contributed crucial minutes early and often in the first game of the west semis.

For Denver, the Argentinian rookie Facu Campazzo is an electric playmaker, and Monte Morris makes an impact nearly every time he touches the ball. Midseason acquisition Aaron Gordon and longtime Nugget Paul Millsap can both do just about everything you need them to do. Veteran big man JaMichael Green and rookie Markus Howard each packed some punches throughout Game 1. Even Austin Rivers, originally signed by the Nuggets to a 10-day contract, has nestled into a huge role for this team.

Denver started the first three quarters of Game 1 with scoring runs of 11-4, 10-3, and 9-1. But Booker, Bridges, Crowder, and Ayton provided a barrage of three-pointers—mostly of the long-distance variety, but some the old-fashioned way—and the Suns waged a 16-0 scoring run late in the third quarter. They answered the bell, yet again, and made up for an underwhelming first few frames by Chris Paul.

In that same roundabout timeframe, Phoenix hit 11 of 12 field goal attempts—and at one point, eight straight—around the same time Denver missed seven straight shots. The Suns completed an improbable 29-point turnaround—going from down nine points in the third to up 20 points in the fourth. That’s a tough hole for any team to dig itself out of, and Denver just ran out of gas racing a locomotive.

And as Reggie Miller so eloquently put it, Paul is a “master game manager” when it comes to closing out games with the lead. The veteran point guard may have been outplayed by Campazzo through three quarters, but CP3 enjoyed having the last laugh. The Suns dynamic supporting cast got them to the final frame with the lead, and their MVP ensured they went home with it. Four possessions in a row, Paul eviscerated the Nugs. Step-back jumper. Step-back jumper. Driving layup through contact. Step-back trey in Millsap’s eye. He went six-for-six in the fourth quarter.

The momentum Paul built in the final quarter led to the play of the game, a fast-break alley-oop from Cam Payne to Torrey Craig that pumped the Suns’ crowd up louder than we have heard an arena all season. I know, that’s not saying much, but you have to admit that Phoenix has a great fan base. And the Suns love playing at home—their 29-10 record at Phoenix Suns Arena is the biggest reason they finished with the second seed. It was also a major catalyst in the Suns’ commanding first-round win over the defending-champion Lakers. And it might now help them prevail in this series, and head for the Western Conference Finals.

Denver is strong, but without home court advantage and without its third scorer (Jamal Murray), it’s tough to like the Nuggets in this series. And it’s downright impossible to bet Denver in Game 2 after Phoenix generated that Game 1 momentum. If CP3 can struggle through three quarters and Phoenix can still win by double-digits, look out below if CP3 can put together a strong outing from start to finish.

Monty Williams deserves major kudos for the stupendous team basketball his squad establishes nearly each and every night. They pace. They space. They constantly move without the ball, and almost always find the open man. They trust each other. Like Denver—and unlike most powerhouses in the modern NBA—this is a complete team, not a squad with two or three superstars and a bunch of replaceable role players.

But of the two squads, Phoenix is the superior team top to bottom. The Suns are more aggressive, getting to the line 20 times (and hitting 17 free throws) compared to Denver’s paltry six free throw attempts in Game 1. They have more pure scorers and better overall shooters, with four players exceeding 20 points by the end of Monday night. And they clearly have the better leader—and closer—in Paul, as well as the better coach in Williams.

Give me Phoenix in an encore performance Wednesday night. I just can’t bet against this squad, with its rotation clicking on all cylinders and its fans completely bought in to their status as true NBA title contenders. I like the Suns -5 or better against the spread, and -220 or better on the moneyline.

Schmitto’s Pick: The Denver Nuggets still have injury concerns, with “(player-popup #michael-porter-jr)Michael Porter Jr questionable and Will Barton doubtful. Meanwhile, Chris Paul looks healthy and recovered from his shoulder injury. In Game 1, he scored 21 points on 8-of-14 shooting, delivering 11 assists in 36 minutes of play. Porter’s and Barton’s statuses are a concern for bettors, for sure, but if you’re leaning toward the Nuggets, you can find hope in the fact that they led halfway through the third quarter. I started the series by betting on the Nuggets and recently-announced MVP Nikola Jokic. What I didn’t give enough consideration, however, was that the Suns have the Coach of the Year in Monty Williams and seasoned floor general in Chris Paul. The duo put combined their high basketball IQ at halftime and pulled away in the second half by dissecting the Nuggets defense with pick-and-rolls. ESPN’s Zach Lowe broke down the tape and it’s absolutely devastating. I presume Williams and the Suns will walk into Game 2 with the same game plan, and I simply don’t see how the Nuggets stop it. I’m betting the Suns 1H -3.