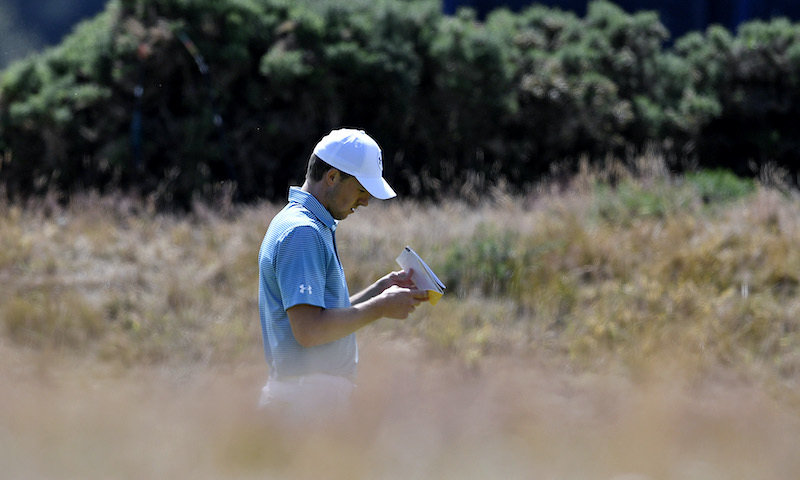 Let’s get ready to ruuuum… well, maybe. The world’s best will tee it up in the 2021 Open Championship at Royal St. Georges this weekend. We already looked at Open Championship outright odds, prop bets, a British Open betting guide, and some golf betting trends. This piece focuses on matchups — tournament, round, and even 3-balls. Prior to getting into that, let’s take a look at possibly the most important factor for the tournament — the weather.

One can make a shortlist of key statistics, trends, or recent form to help target golfers for betting or build lineups in DFS. That said, nothing will matter if the weather at Royal St. George’s does not cooperate. In benign conditions, the course is very favorable for players that can play well off the tee. If the wind becomes overwhelming, par is going to be a great score and grinders will flourish. For that reason, I recommend checking the weather report as close to tee-off time as is possible for any last minute additions to your Open Championship betting card.

At the time of this writing, Kevin Roth forecasts plenty of winds — with gusts pushing 30 MPH on Thursday morning. His lean is to target Thursday afternoon/Friday morning golfers — as a consequence of the better draw for Thursday afternoon players. Let’s start picking some matchups.

I do not want to waste any time with a very popular, chalky stance. I am going to the mat with Jordan Spieth this week. He is my favorite play in a variety of contexts and I am willing to get as much action on him as I can. A solid way to diversify would surely be to mix in some matchups as a pseudo-cash game approach to sports betting. Perhaps — and maybe likely — he does not win the tournament. That doesn’t mean he can’t pay off matchup and finisher tickets.

If planning for windy conditions, Spieth ranks 6th in bogey avoidance over the last 36 rounds in the field and 12th in scrambling. His track record of success at The Open combined with his strong recent form has me very excited. That said, I want him in an array of matchups. I absolutely want tickets where he is an underdog. This is a tie-no-bet ticket at BetMGM but I would be willing to take action on Spieth against anyone in the field as an underdog this week. So, while Xander is specifically listed, this is a general matchup blurb. Go Jordan!

For this 3-ball, I am pretty content squaring off with the opponents laid out by DraftKings for Reed. Tony Finau ranks 120th in putting. Scottie Scheffler ranks 134th in scrambling. Finau’s recent form has left plenty to be desired and Scottie Scheffler has not made a start at The Open. Finau brings a very strong Open Championship resume with two consecutive T10 finishes. His current form is worrisome, though. Reed is another player I am targeting this week. I love getting action in multiple types of markets.

In another tie-no-bet situation, I want to back Shane Lowry against Bryson. Lowry is your prototypical grinder — an excellent around-the-green player with a Claret Jug under his belt. Recently, Bryson seems to be in a state of flux. A change to his caddy and recent poor form make me extremely nervous his his prospect across the pond.

Given the likely weather disaster awaiting morning tee times, Lowry’s grinding approach and expertise around-the-green in these conditions is far more comfortable against a player who is committed to playing the way he thinks golf should be played. As much as I respect Bryson’s approach, I am not convinced it will fare well in extremely challenging conditions. Taking on the wind seems a risky strategy and I want to short Bryson this week. Give me Lowry in round one.

Another favorite from my props article, Christiaan Bezuidenhout finally plays a major that fits his game. The Open Championship does not — and likely will not — require bombing the ball off the tee. Instead, scrambling and grinding for four rounds is going to be vital and Bezuidenhout checks all of those boxes.

Ranked third in scrambling and putting, Bezuidenhout ranks 16th over his last 36 rounds in around-the-green play. His finishes at the U.S. Open and PGA Championship were extremely impressive given that the lengthy courses present a challenge for the shorter-hitting South African. Length should not matter at this event. I expect him to make a statement in Round 1 and potentially threaten the first round lead. I don’t profess to know that much about the listed opponents — I just want action on the South African. Bet him where you can find him.

The Open Championship is upon us. Get the coffee ready, Americans. We will be up early sweating bets and lineups. Good luck to all of you and thanks for reading.