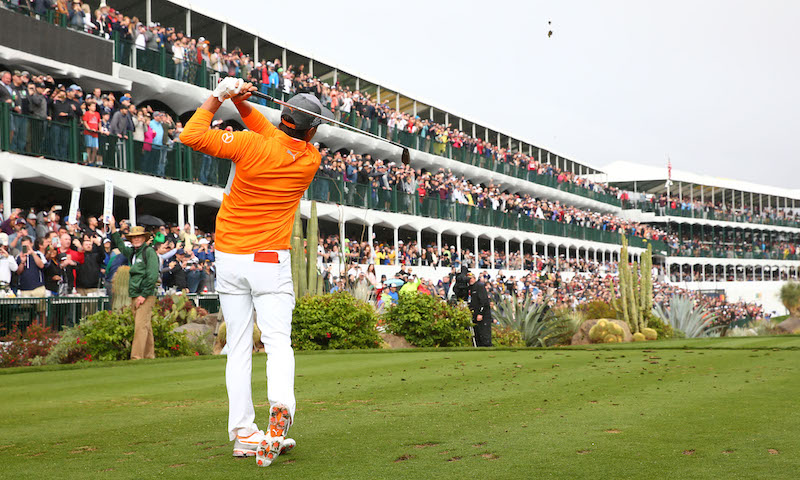 With plenty of time to spare for Super Bowl props between now and Sunday, let’s look at this week’s course, field, and golf odds.

As you can see from past winning scores, TPC Scottsdale is a course where players can go low if they take advantage of its three Par 5s, and while hitting the ball far certainly doesn’t hurt, it’s not a prerequisite for success at the Waste Management Open. As defending champion Webb Simpson and previous winners like Chez Reavie have shown, shorter hitters can go low, too.

There are 79 bunkers and six water hazards located throughout the course, so while drivers will be in play for the bombers on Tour, there’s plenty of trouble to find, including a large puddle on hole No. 17 — a drivable 336-yard par 4.

132 golfers tee off at 9:20 AM ET Thursday morning, giving sports bettors an eventful few days before the Super Bowl. Half of the Top-10 golfers in the Offical World Golf Rankings will be there, including defending champion Webb Simpson and a host of big names such as Justin Thomas, Jon Rahm, Matt Kuchar, Bubba Watson, and Gary Woodland. One notable name missing from the field is Tony Finau. After losing to Simpson in a playoff at the 2020 WMPO a year ago, Finau is headed to Saudi Arabia this time.

For the second year in a row, Jon Rahm (+700) opens as the favorite to win the Waste Management Open. Having played college golf around at Arizona State, Rahm is familiar with TPC Scottsdale, entering the week with six consecutive Top-15 finishes at the event. Unfortunately, the closest he’s come to winning the Waste Management was a T5 in his 2015 debut. Last year, Rahm added a T9, finishing six strokes behind the winner.

Once again not far behind Rahm sits Justin Thomas (+800), who returns to Phoenix after back-to-back third-place finishes in 2019 and 2020. Lately it’s not just TPC Scottsdale where Thomas is going low. He has three Top-5s in his last four events and hasn’t finished worse than 12th since August.

Hideki Matsuyama (+2200) and Rickie Fowler (+5000) are horses for the course. Before successfully winning back-to-back in ’16 & ’17, Matsuyama had a runner up and a fourth-place. His last three visits haven’t been as successful, at least by Matsuyama’s standards. In 2018, he withdrew and followed up with a T15 and T16 in his most recent visits. Fowler, who found himself in 2nd and 4th during Matsuyama’s two-year reign, hopes to rebound from last year’s T37, the beginning of a largely disappointing season for the fan-favorite.

Returning to Scottsdale for the first time since 2017 is Brooks Koepka (+4000). The four-time major champion should probably stay out of your golf betting picks, though. Fresh off a missed cut at the Farmers Insurance Open, Koepka has missed the weekend in the three straight events for the first time in his career.

Finally, further down the golf odds sheets, there several intriguing longshots, including Henrik Norlander (+8000), Luke List (+12500), Keegan Bradley (+25000), Matthew NeSmith (+30000), most of whom have excellent approach games that they usually offset with poor play elsewhere.

16-to-1 at the Waste Management Open this time last year, it’s been a steep fall for Fowler in terms of golf odds and expectations, but a recent swing change could be just what the doctor ordered. Fowler finished 21st at the American Express before losing nearly four strokes putting and finishing 53 at the Farmers. Fowler’s approach stats don’t stick out, but they aren’t horrible either. He gained a modest sum in that department at both the Farmers and the American Express. For the second week in a row, I’ll take the opportunity “buy low” on Fowler whose last PGA Tour victory came at this very event.

Bubba hit the ball well during the fall swing, gaining 5.5 strokes approach at the CJ Cup and 6.2 at the U.S. Open. In his 2021 debut, the left-handed bomber missed the cut at Torrey Pines. I’m willing to let that slide, as the lefty seems to love dropping bombs off the tee in the desert. He enters with back-to-back Top-5s at the WMPO, and has two second-places finishes dating back to 2014. The one thing he doesn’t have at TPC Scottsdale? A win.

Woodland’s recent approach game isn’t anything to write home about, but historically speaking, he’s been a pin-seeker. Among 132 golfers in this week’s field, Woodland’s approach game ranks 12th over the last 100 rounds. I don’t want to bet on Woodland in any matchups, as he carries some concerning numbers, particularly off-the-tee, from the Farmers Insurance Open. The thinking behind this bet isn’t any different from my first pick. Like Fowler, Woodland has had plenty of success in Scottsdale, including a win and a Top-10 in two of his last three appearances.

List gained 3.4 strokes approach at the Farmers one week after gaining 4.5 strokes at the American Express. Unfortunately his putter let him down both times (surprise, surprise), yet he still managed to finish 21st and 10th. The good news is that TPC Scottsdale is one of six courses where List gained strokes on the green in 2020. There’s no doubt his swing is in form — he simply needs some putts to fall.

Norlander tied for 2nd at the Farmers while losing a stroke to the field with his putter. The Swede gained 4.1 strokes approach en route to a 12th-place finish. Norlander knows how to hit the ball close to the hole, which I expect him to do enough this week to give himself another chance at his first PGA Tour victory.

I had hoped the American Express would be the last time I bet or played Bradley — truly, I did. However, +25000 at DraftKings Sportsbook on a golfer who is 3rd in strokes gained approach in his last 50 rounds is simply a bargain I can’t pass up.

Look at our Waste Management Open PGA betting card to find which online sports betting site has the best odds for each golfer.