On August 17th, RotoGrinders Premium user MHDU2424 was able to take down $20,000 for first in the DraftKings $10 NFL $100K Preseason Special We thought you might like to learn how he leveraged RG tools and other resources to take down the big score. I had a chance to catch up with him this week, and ask a few quick questions about his big win. 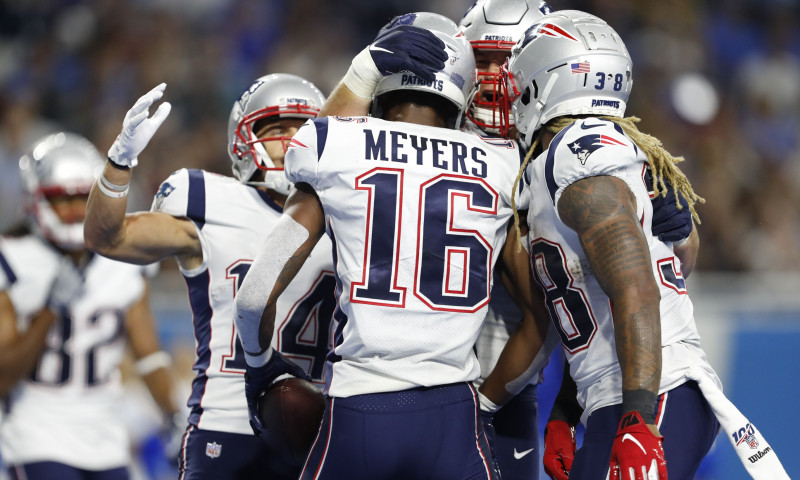 RotoGrinders: Tell us a bit about yourself. Where are you from? What’s your background? How did you get started in DFS?

What’s up Grinders? I grew up on the Jersey Shore and currently live there now. I went to school at the University of South Carolina for Finance in between and look forward to one day moving back down south.

I’ve been involved in sports since I was a little kid. My interest in DFS can probably be traced back to season long fantasy football and poker…both were a big part of my high school days. Eventually I moved on to sports betting, and then I decided to give DFS a shot during the big commercial boom a few years back. One of my buddies from college was crushing NBA DFS at the time and kinda taught me the basics.

I can’t really tell you exactly when or how I found RG, but it was definitely early on in my DFS days. It was probably just a simple google search looking for DFS help. Like most DFS players, I use a few different resources now, but RG has been my go-to every day for a while now.

There’s always been a big edge in preseason contests that you can’t really find during the regular season. It’s definitely tougher now compared to a few years ago, but if you put a little research in you should be able to turn a profit during August.

RotoGrinders: Which RG tools, articles, or shows do you find most helpful when preparing to build your preseason lineups?

Honestly I just bounce around to check out all of the RG content and try to digest the slate as a whole. The preseason NFL team at RG does a great job with the slate breakdowns and videos, but the best tool for me has been LineupHQ.

The projections on LineupHQ have done a really nice job in giving us an idea on which players to target and where we can pivot. I love how the projections are constantly being updated right before lock as we get playing time news.

I also want to give a shout out to all of the guys in the NFL Premium discord chat, especially Chris Gimino, Allan Lem, and Alex Dunlap. There are tons of other sharp guys as well giving information and their ideas that you can’t find anywhere else in real time.

RotoGrinders: You won 20K on 8/17/2019. Walk us through the basics. How many lineups? Did you use LineupHQ? How long did you spend building/researching for this slate?

I’m mostly just a large field GPP player, and on this night I decided to throw 6 lineups into the big DK GPP. I spent about an hour before lock researching the slate on RG and talking to the guys in the discord chat.

I used LineupHQ for the projections and core plays for the night. I prefer making my lineups by hand, but LineupHQ is good for that too 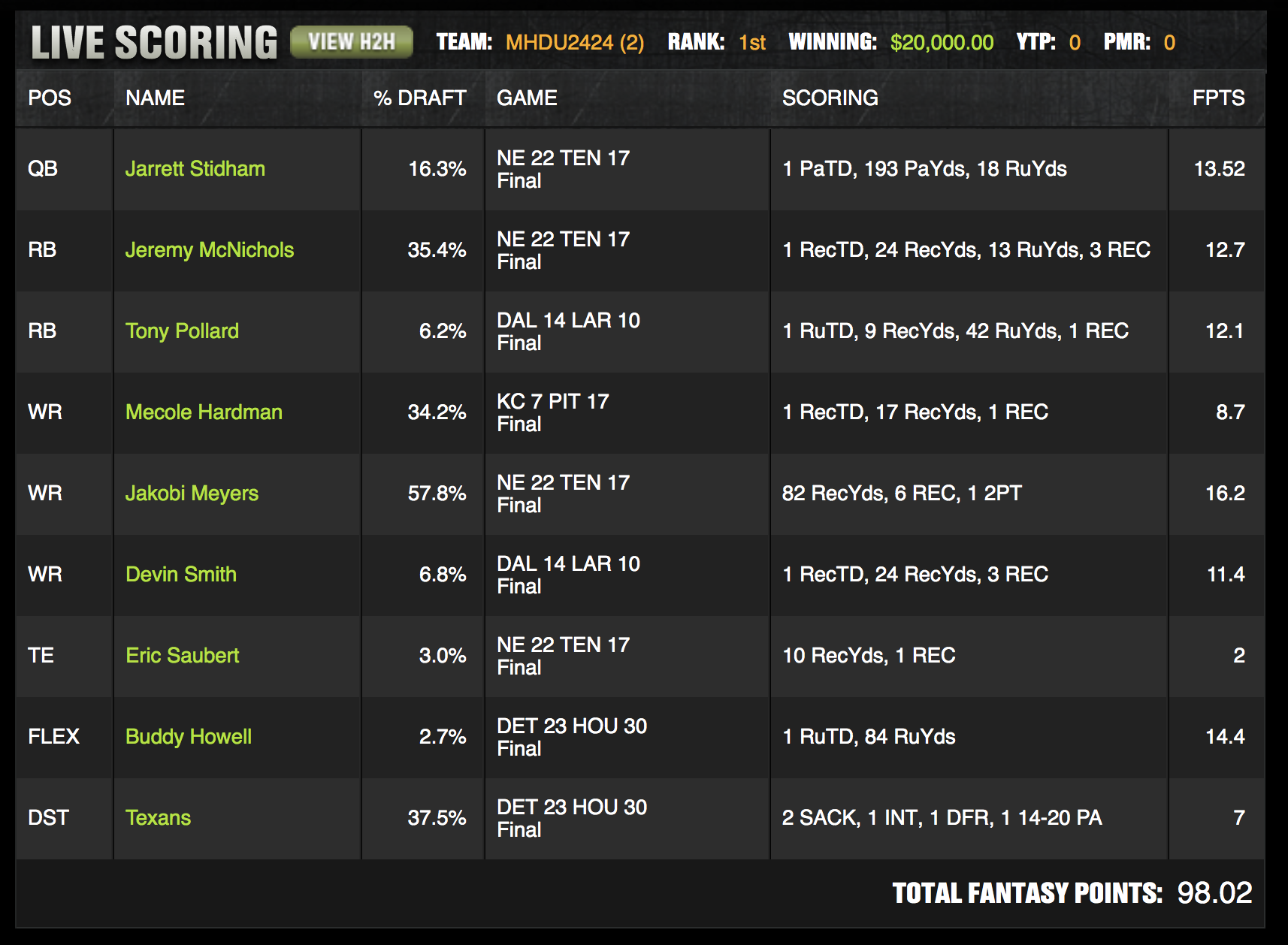 On this slate, the Chiefs starters were the obvious heavy chalk. I got burned by them in most of my lineups, but I decided to get off of them in two of my six lineups. There was a lightning delay leading into the Chiefs game, and I didn’t completely trust Andy Reid to go all in on them.

Jakobi Meyers was one of the top plays regardless, and I just figured that Stidham was a solid pivot off of Mahomes. He had just as good a chance as any QB on the slate to get it done with his projected playing time.

I honestly don’t remember any late breaking news, but I just knew of McNichols from his college days as a pretty productive RB. LineupHQ and the slack chat had him as a solid RB choice for the night so I had him in most of lineups.

RotoGrinders: The big difference makers in this lineup were Tony Pollard, Devin Smith, and Buddy Howell at an incredible 10% combined ownership on a short slate. How did you decide to keep them in play? What data point, game theory angle, or other factor led you in this direction?

When making my lineups, I try to mix some of the chalk/ top projected guys with a few lower tier guys that still had a ceiling. All three of these players were pretty high on the LineupHQ projections, but weren’t at the very top.

Tony Pollard is a player that has been getting a ton of hype with Zeke’s holdout, so I decided to throw him in a couple lineups.

Buddy Howell and Devin Smith were just guys I happened to see were having good camps while I researched the slate. They both were mentioned in the RG slate breakdown as guys you could take a shot on. As a Jets fan I knew of Devin Smith, but I’ll admit I had no clue who Buddy Howell was going into the night.

RotoGrinders: You said this was your biggest score to date. You gonna buy anything special?

Yeah, I’ve had some solid scores over the years, but 20k is now my biggest hit…it’s pretty crazy to turn a $60 investment into 20k overnight.

I’m honestly not going to buy anything crazy as I recently bought a condo, but I’m definitely going to pay for a family vacation to go see the Jets on the road this season.

My dad has been taking me to games since I was a born as a season ticket holder so I think this would be a fun way for all of us to celebrate. I have extended family in Jacksonville, and the Jets happen to play the Jags on the road later this season.

It’s also nice to have a boosted bankroll for the Fall. I’m big on NFL, CFB, NBA, and Soccer DFS and they’re all starting up soon.

RotoGrinders: We all know winning is tough, and there is at least a little bit of luck involved. But is there anything you think can learn from this moment to help you or anyone else reading get to the top again?

Yeah for sure…it takes a lot of luck to have the right lineup that takes down a large field GPP on a given night…If you consistently put yourself in good positions though it’ll eventually happen.

I would also say that when you’re constructing GPP lineups, just try to think about the slate as a whole. You should be building your lineups for a reason, and not just throwing in random players, or pivots. Just try to take a step back and build a lineup with a purpose with certain game scripts in your mind.

For this particular lineup, I built it knowing that I only wanted Hardman on the Chiefs in the scenario where Andy Reid decided to play it safe with his starters. Luckily for me it played out this way, while the stars aligned with the rest of my lineup.