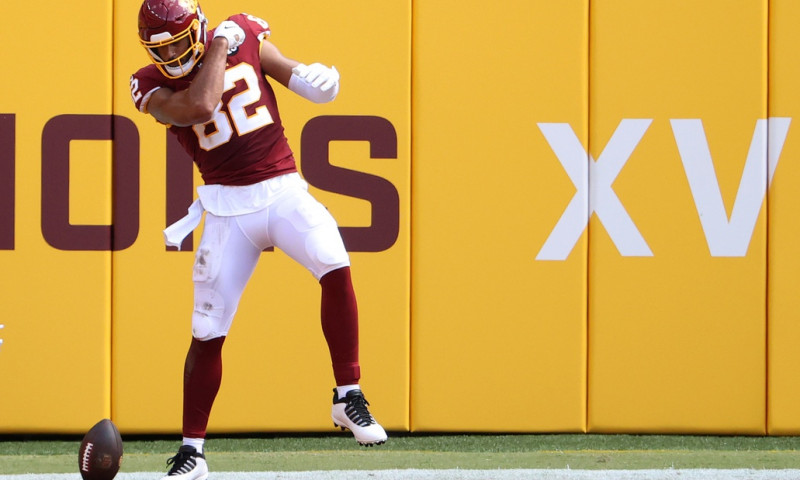 The first week 2021 NFL season was a roller coaster, during which the New York Giants and Washington Football Team experienced more lows than highs. The Giants got destroyed 27-13 at home by the Denver Broncos, with stud running back Saquon Barkley totaling just 27 all-purpose yards and third-year QB Daniel Jones often struggling with pressure at the line of scrimmage. WFT, meanwhile, fell at home 20-16 to the LA Chargers, and new starting QB Ryan Fitzpatrick suffered a hip subluxation. Not good.

So, what do we expect from these teams in their Thursday Night Football clash? From a final score perspective, it’s honestly tough to say as both these teams are in a state of flux. And from an optics perspective, it might not be a very pretty contest. This game seems like a perfect opportunity to construct an alternative single-game parlay, which involves streaming together a handful of different prop picks from one game.

Whatever you want to call it—a same-game parlay (a phrase trademarked by FanDuel Sportsbook), single-game, or one-game parlay—these are all just recently invented terms for a parlay consisting of multiple correlated wagers from one specific game. It provides bettors with good options to bet a game despite not liking the standard spread, moneyline, or over/under margins. And sometimes, a $1 lottery ticket of a same game parlay can yield major dividends. If you’re a DFS lover, consider this a way to create your own GPP, but at the sportsbook! (H/T RotoGrinders CEO Cal Spears for that analogy)

In this column, we will be piecing together our top “same game parlay” picks on PointsBet for Giants vs. Washington Football Team. And we’ll pick our favorite pre-constructed “one game parlay” options from BetMGM. Have fun, and enjoy Thursday Night Football! Let’s win BIG!

Some people call parlays “sucker bets,” but if you do your due diligence and make the best educated guesses, parlays can be huge money makers. Take this parlay, strung together by four very possible outcomes, that could net you nearly $4,000 on a $50 wager.

Of all the sites that offer single game parlay options, I lean toward PointsBet and FanDuel as my favorites. The reason: these sites allow you to pick your own alternative prop legs, and construct your own single game parlay, while MGM pre-constructs the parlays for you.

Here’s my thinking on the PointsBet parlay I put together. I don’t think this game hits the OVER, as both these squads feature QBs who often struggle in the red zone. WFT has a formidable defense, and we could easily witness a punt total in the double-digits. Thursday Night Football games are often sloppy, low-scoring affairs, especially early in the season with lower-tier quarterbacks.

Since I have Washington winning but the final score total under 40 points, it makes sense to me to pick the home team to score 11-20 points in the contest. WFT scored just 16 points at home against the Chargers last week, and the final score totaled just 36 points. With Taylor Heinicke starting against a mediocre Giants team, I would not be surprised to see a similar final score this week. And this way, whichever team wins, we will hit as long as the points bands line up.

Next, we will discuss the individual player prop legs in our self-constructed parlay. Everyone who reads my content (or plays against me in fantasy football) knows that I’m big on tight end Logan Thomas and stud second-year back Antonio Gibson. Thomas broke out last year despite a disastrous carousel of QBs, and Gibson looked phenomenal toward the end of the season as a dual-threat game-breaker.

These guys should produce regardless of who starts under center—Thomas found paydirt on a TD pass from Heinicke last week, and Gibson finished with 90 rushing yards on 20 carries. New York has a much worse defense than the Chargers, in my opinion—it just surrendered 27 points to “(player-popup #teddy-bridgewater)Teddy Bridgewater”:/players/teddy-bridgewater-18114’s Broncos—and now the G-Men head down to the nation’s capital. These two studs should absolutely show out statistically once again.

I don’t usually love parlays, but this one piques my interest in a major way. I think every leg of the bet is very attainable, so it’s worth your while to at least put a little scratch on this one.

I’m intrigued by this promoted, pre-constructed parlay from MGM. I think both these squads have a chance to win this evening, but I don’t think we will see an offensive explosion from either side. And Daniel Jones literally just logged 267 passing yards in the Giants’ home loss to Denver last weekend, so 250+ yards in a duel with a backup QB seems very much attainable.

Granted, WFT’s defense could rear its ugly head and limit Jones and the Giants. But DC’s D-unit will likely be tired from a short week, and from spending lots of time on the field with a handful of inevitable Taylor Heinicke three-and-outs.

Washington will likely incorporate a lot of dump-offs, check-downs, and screens to Gibson and high-quality third-down receiving back J.D. McKissic. WFT has many more lethal downfield threats—including Thomas, stud wideout Scary Terry McLaurin, and rookie receiver “(player-popup #dyami-brown)Dyami Brown”:/players/dyami-brown-2862095—but I’d be surprised if they made immediate impacts in Heinicke’s first week as Washington’s starting QB. WFT averaged just 21.1 points per game last season (25th) and 18.9 points per home game (28th). And with FitzMagic gone as fast as a rabbit in a hat, the embattled Football Team with no name is right back to square one offensively.

Thus, I like the probability of Jones and the Giants keeping this primetime game close, and the final score staying under 41. Neither of these teams’ Week 1 games reached 41 points, and both these teams experienced offensive struggles despite logging 250+ passing yards. Give me the yardage without a points explosion, and a close game without the OVER hitting.

As you scroll down the one game parlay pre-constructed options on MGM, the choices obviously become more and more obscure. But this one caught my eye, for a few different reasons. For one, I have WFT winning the half and the game. It’s a superior overall team with the benefit of home-field advantage. However, I don’t have WFT winning by a huge amount.
Heinicke has been serviceable when called upon, but he’s still a second stringer for a reason. I think Daniel Jones and the G-Men can at least keep things close, which seems to be how most primetime games end up these days.

The most difficult leg of this parlay will be the OVER on 13.5 first-quarter points. While New York’s defense remains spotty, Washington possesses one of the more elite defensive units in the NFL. And Daniel Jones and Taylor Heinicke aren’t great candidates to blow the roof off the barn, so to speak. Jones threw one touchdown and ran for another at home last week versus Denver, accounting for the G-Men’s whole-game total of just 13 points. And at home against the Chargers, Heinicke tossed just one TD, WFT’s only non-kicking score of the day.

Pick this parlay if you are bold and have a looser budget than me, but realize that the odds are long for a reason. This would be a great lottery ticket hit at $10, but if you wager $50 or $100 and lose, you may regret playing it completely.