THE BLITZ: An Examination in DFS Precision

It’s rare that a projection system is really held accountable by tracking and quantifying its results. With so many DFS experts out there, why aren’t there more published records to prove whether a system is profitable?

Transparency is key to building expertise, trust, and differentiation; and a factual exploration of THE BLITZ’s profitability is what this article is about.

I’m going to walk you through how THE BLITZ has performed this year, so you can better quantify its value.

THE BLITZ projection system uses advanced sabermetric techniques to form what we believe to be the most sophisticated NFL Player Projection system on the market. And what truly ignites this proven analytics system beyond basic projection statistics is the overlay of advanced factors including scouting-combine data, holistic player considerations, and game context adjustments. Details about THE BLITZ’s cutting-edge methodology can be found here.

The team behind THE BLITZ’s innovation is Derek Carty, DFS expert and creator of THE BAT projection system for MLB DFS — proven to outperform Vegas lines — and PropWizard Professional Sports Gambler, which applies the same advanced methods as Vegas Oddsmakers to strengthen and refine player projections. PropWizard operates EV Analytics and was the top NFL sports bettor on SharpSide for the 2018 season.

The challenge with buying any DFS content is determining its worth. Is paid content more accurate than free content? Do I want to risk my paycheck to find out? What does an accuracy test look like, anyway?

There are several ways to conduct accuracy tests on a projection system. For example, I can illustrate how THE BLITZ outperforms competitive projections. I can quantify the strong mathematical correlation between player projections and confirmed player results. I can even document strong DFS scores or tout prize winnings. But the drawback to all of these tactics is their failure to quantify a return.

Since NFL kickoff, we tracked the cash-line for one of the most prominent cash game contests, DraftKings’ Massive Single-Entry $25 Double Up. The contest is “Massive” and attracts a large sample of cash-game entrants. Due to the size and entry fee, we feel it is a great benchmark for comparing weekly cash game scores because they correlate well with average weekly H2H cash contest scores.

What does this all mean? If THE BLITZ can outperform the benchmark of this large cash game, it’s reasonable to conclude THE BLITZ would generate similar results in your other cash games (H2H, 50/50, etc.)

The contest results are tracked below.

Because transparency is so important for DFS fans, screenshots were taken each week of the optimal lineup on both DraftKings AND within RotoGrinders’ LineupHQ tool. You can view them here 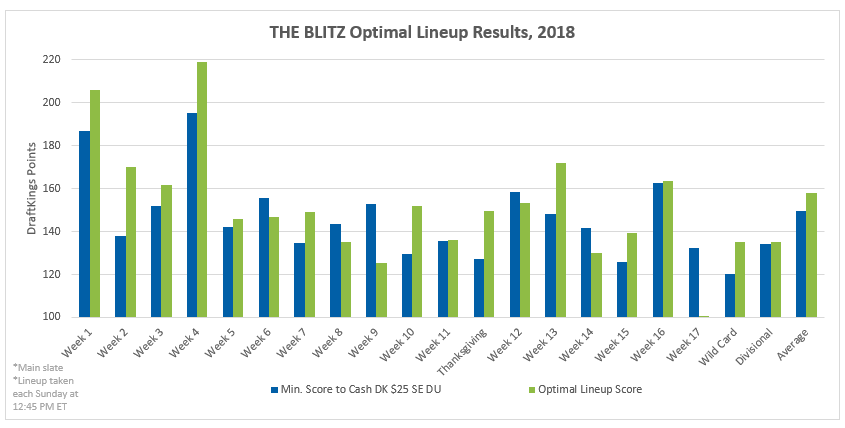 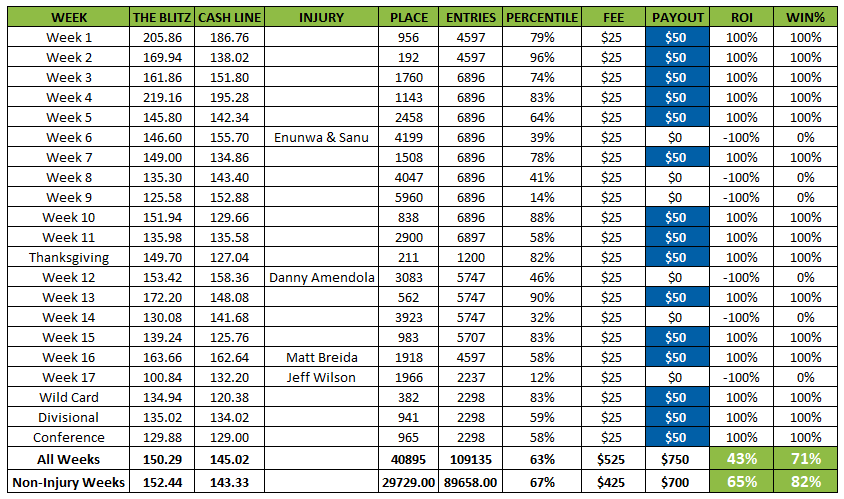 At first glance, a total profit of $225 after a full season may not seem like a lot, however, the calculations are based off a single entry for one contest. Had you played more contests and increased your investment, you likely would have generated more profits.

The main takeaway isn’t the total profit, though; it’s the massive 43%+ ROI. Given you need to win more than 57.5% of the time just to break even, a 43%+ ROI is extremely strong.

What is a realistic ROI for someone using THE BLITZ?

We’ll be the first to admit though the ROI and Win% was insanely good in 2018, there is no guarantee numbers that high are sustainable long-term. Even over a full season, 21 weeks is still something of a small sample and prone to some variance. Still, no matter how you cut it, numbers that good can’t be all good luck and do highlight the quality of the product. We did a similar study mid-way through 2017 and found slightly worse but still fantastic results. Based on these studies and our personal results, it seems reasonable to assume THE BLITZ’s optimal lineups can generate 15%-20%+ ROI over a large sample size of cash games even once you account for regression.

How does THE BLITZ’s optimal lineup perform in GPPs?

THE BLITZ’s optimal lineup is designed for cash contests because it’s not factoring in projected ownership or additional GPP variables. However, had you blindly submitting THE BLITZ’s optimal lineup every week in the Million Maker GPP this year, you would have generated a profit also. Part of the reason for not including this data in the study is we don’t have the screenshots to verify this and because THE BLITZ’s optimal lineup is designed for cash contests and not GPP contests. Had you dug deeper into THE BLITZ’s projections and its top point-per-dollar plays each week, you would have found yourself on lots of underowned value this year, including Ryan Fitzpatrick and Patrick Mahomes the first couple weeks of the season, Matt Ryan for each of his big weeks, Mitchell Trubisky for each of his big weeks, Aaron Rodgers and the Packers the week they won the Milly Maker, and lots more. THE BLITZ’s top Point/$ plays and stacks are frequently in the winning Milly Maker lineups. Tips on how to use THE BLITZ for GPP contests can be found are below.

How does THE BLITZ perform on FanDuel contests?

Due to time constraints, we’re not tracking FanDuel contest scores. Considering the accuracy of the projections, one could conclude THE BLITZ’s FanDuel Optimal Lineup would perform well over a large sample size, although Derek advises users to play the bulk of their action on DraftKings, where he believes there is a greater edge. Their pricing is softer (which seems to cater to casual players so they don’t lose their money as quickly), which reduces edge. DraftKings forces you to make tougher decisions, as opposed to just “whose studs had studlier performances today”, which introduces more random chance and variance into the equation.

Do you have any other tips on how to further increase my bankroll using THE BLITZ?

With so many touts in the market vying for your trust and so much DFS content clouding your judgment with smoke and mirrors, how can you be certain of your projection system’s profitability? If your system isn’t documenting its results to prove its value, it may be worth questioning why not.

With THE BLITZ, not only are you getting a system that relies on sound mathematical principles and the most advanced sabermetric methodology, but you’re also getting quantifiable results of potential ROI. What you do with this information is up to you. 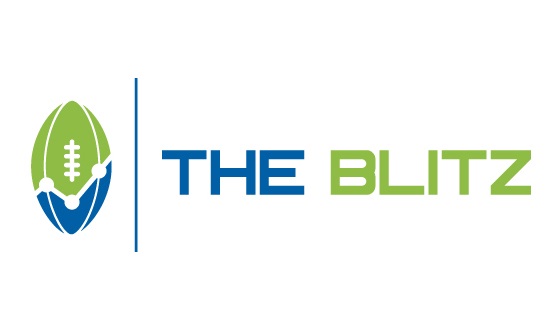 Grow your bankroll with THE BLITZ!